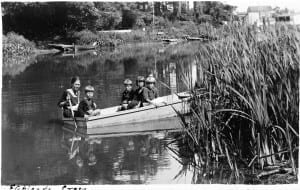 If you click on the first photo on this page, and then click again, you will be able to view a barn that is visible in the top right corner of the photo. If you click the Back button at the top of your browser, you should be able to get back to the page you are now viewing.

We owe thanks to Barbara Durance for sharing this photo, taken about 1925, with us.

We have previously displayed a map and an aerial photo offering evidence that the barn seen in the background (at the top right of the image) is located on the Samuel Smith homestead site at 85 Forty First Street.

The photo below, from November 1949, continues the discussion. It’s an aerial view looking east along Lake Shore Blvd West from near the Long Branch Loop. The source is: Ontario Archives Acc 16215, ES1-814, Northway Gestalt Collection. If you click on the image, and then click again, you will see an enlarged view of the photo. To return to the page you are currently reading, click on the Back on your browser.

The barn at the far right of this photo is a possible candidate for a good match for the barn that appears in the first photo on this page, the 1920s photo from the Durance family. I would add, however, that a number of people have mentioned that the barn in the background may have been one that was located closer to the shoreline than the barns at the Colonel Samuel Smith homestead site near Forty First Street and Lake Shore Blvd. West.

The third photo on this page is an aerial photo from the early 1950s, which Robert Lansdale has shared with us. If you double click on this image, you’ll read a note referring to “Barns 1, 2 & 3 seen in the Durance Boat photos.”

I would like to suggest, on the basis of the second (November 1949) photo on this page, and on the basis of an archaeological survey of the Smith homestead site in 1984, that the building that is identified as Barn 1 in the photo is not in fact a barn.

It is, instead, the location of the log cabin that Colonel Samuel Smith built in 1797.

After military service with the Queen’s Rangers in the American Revolutionary War, Colonel Samuel Smith was granted a large tract of land in 1793 in Etobicoke. Originally a log cabin to which extensions and siding were added, the colonel’s house was in continuous use for about 152 years from 1797 until around 1949. When the house demolished in 1955, the original log cabin was discovered inside the building.

A short distance north of the Samuel Smith house is an outbuilding that historical archaeologist Dena Doroszenko uncovered in a preliminary achaeological survey of the Smith homestead site in 1984.

A succinct overview of the history of the Colonel Samuel Smith homestead site can be found in a the text of a one-page letter sent by large numbers of Long Branch residents in 2011 to Etobicoke-Lakeshore MPP Laurel Broten as part of an effort to ensure that Parkview School, where the archaeological remains of the homestead are located, remains in public hands.

The barn that is seen at the far right in the middle photo from 1949 on this page is not clearly visible in the bottom photo from the early 1950s. Based on the available evidence, if one were to speak of three barns, they would be the three buildings that are clustered together at the southeast corner of the Smith homestead site as it appeared in the late 1940s and early 1950s. 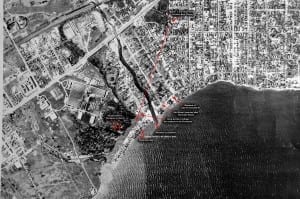 Barn in background of 1920s Long Branch photo appears to be located on Samuel... We’re pleased to share with you these 1920s to 1940s ‘cottage country’...
Scroll to top