Jane Fairburn, author of Along the Shore, focusing on the waterfront communities of Toronto, has posted a vintage postcard on the radials through Long Branch on the Along the Shore Facebook page.

“In the late nineteenth century, as the middle class emerged with time and money to spare, so did a leisure and tourism industry that was concentrated along the lakefront, from east to west. These areas, including Long Branch Park near Etobicoke Creek, were made even more popular and accessible with the appearance of mass transit: the electric streetcar, and in the Lakeshore and Scarborough shore areas, their country cousin, the radial.

“Another popular area, noted by the Toronto Railway Company in a brochure entitled ‘Toronto as Seen from the Streetcars,’ was Mimico Creek: ‘A short distance west is another little river, too small for boating, but just the thing for bathing; it has a fine sandy bottom and is deep enough for a swim without fear of drowning’ — if you have a chance, get out in the unseasonably warm weather and experience the rejuvenated mouth of Mimico Creek today!

The reference to 1909 brings to mind the Middle Road Bridge – discussed in a previous blog post – which crosses Etobicoke Creek between Mississauga and Etobicoke north of the Queen Elizabeth Way. As you walk east across the bridge you arrive at Sherway Gardens.

Dave Cook describes the bridge in Chapter 12, A footbridge and the QEW, in Apple Blossoms and satellite dishes: Celebrating the golden jubilee of Applewood Acres (2004): 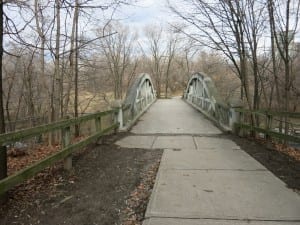 View toward Middle Road Bridge looking east from eastern limit of Sherway Drive in Mississauga. In the background on the right can be seen condos under construction near Sherway Gardens across Etobicoke Creek in Etobicoke. Jaan Pill photo: December 2012

“This particular bridge stands out above all others as it was the first of its kind ever built in Canada, and only the second of its kind ever built in North America. The bridge was designed in 1909 by Frank Barber and C.W. Young. It’s a concrete truss or tied arch bridge and was celebrated for its light weight and strength. The bridge was tested on opening day when 40 cattle were herded across its span. On October 14, 1986, I had the pleasure of co-officiating the ceremony with Etobicoke Mayor, Dennis Flynn, that designated this bridge as a heritage structure. This bridge became the only structure in Ontario to be designated and renovated jointly by two municipalities. Applewood Acres resident and artist, Leonard Crump, who lives on Courtland Crescent, presented me with one of his outstanding drawings of this bridge that he did in 1978, prior to the restoration.

“The QEW was designed as a four-lane divided highway having a median strip which would vary from three feet to 10 feet in width with the remaining less traveled sections as undivided roadway. It wasn’t until 1940 that a 4-mile (6.4 km) section from the Humber River to then Highway 27 (now the 427 Highway) was opened.” 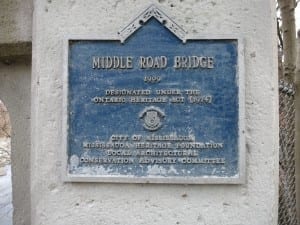 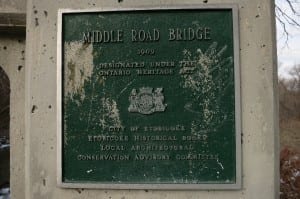 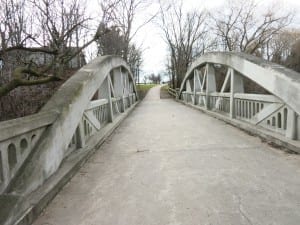 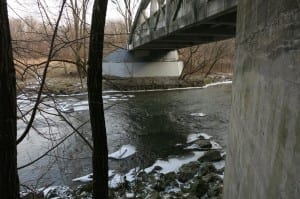 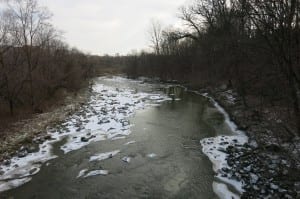 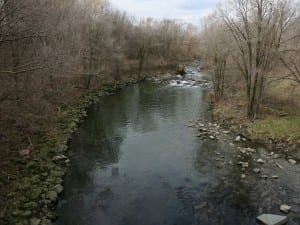 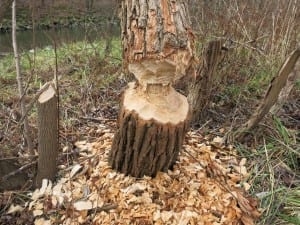 East side of Etobicoke Creek, north of Middle Road Bridge. It’s a delight to observe that the Etobicoke Creek flood plain serves as a beaver habitat. Jaan Pill photo