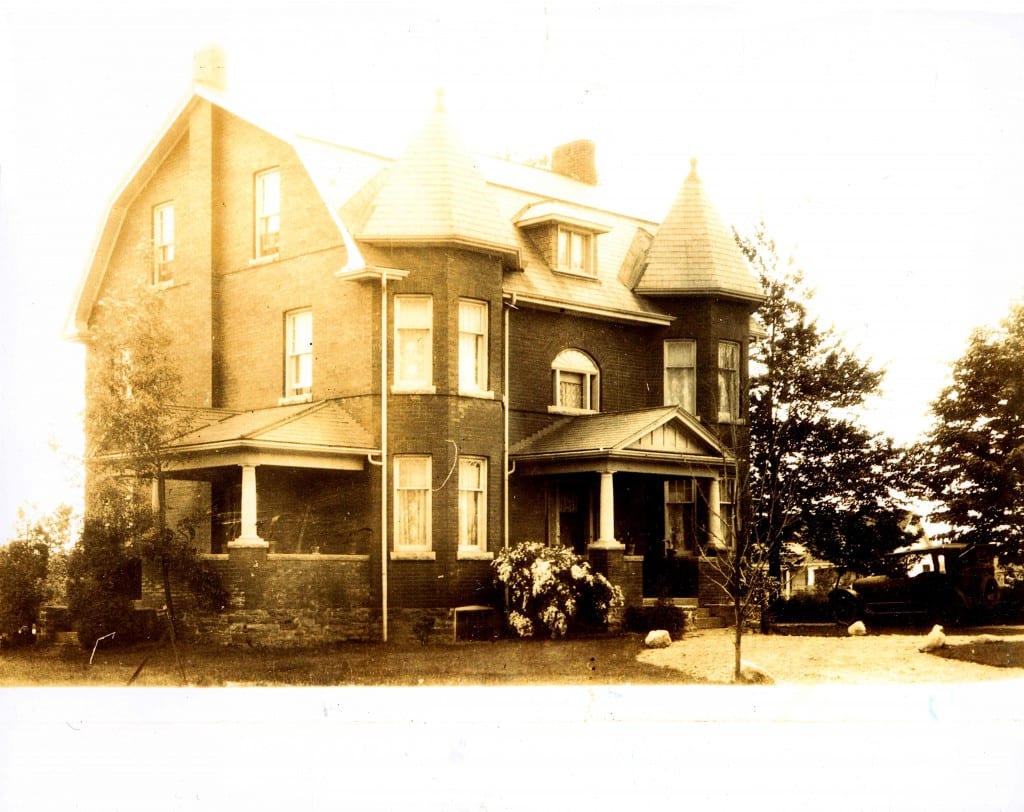 I had incorrectly assumed until now (June 3, 2013) that this is a photo of the Long Branch Hotel. CORRECTION from C. O'Marra, June 3, 2013: "A correction may have been made since your Jane's Walk report but the photo of the Long Branch Hotel is actually the Eastwood homestead at 37th Street and Lakeshore Blvd. I have the exact photo of it from the old Advertiser newspaper. One of the Eastwood children, and there were at least twelve, is seen in the 1911 picture."

This is a photo that Barry Kemp, past president of the Long Branch Historical Society, received some time ago from a resident of Long Branch.

Update (June 3, 2013): Along with the photo that I received from Barry Kemp was a photocopy of the back of a post card, on which was written the name “Eastwood Park Hotel,” I had forgotten that this information was included with the photo that Barry gave to me. I had assumed, incorrectly, that it was a photo of the Long Branch Hotel.

C. O’Marra has indicated in a message sent in June 2013 that this is a photo of the Eastwood Park Hotel, not the hotel that burned down in 1958. I much appreciate the correction. 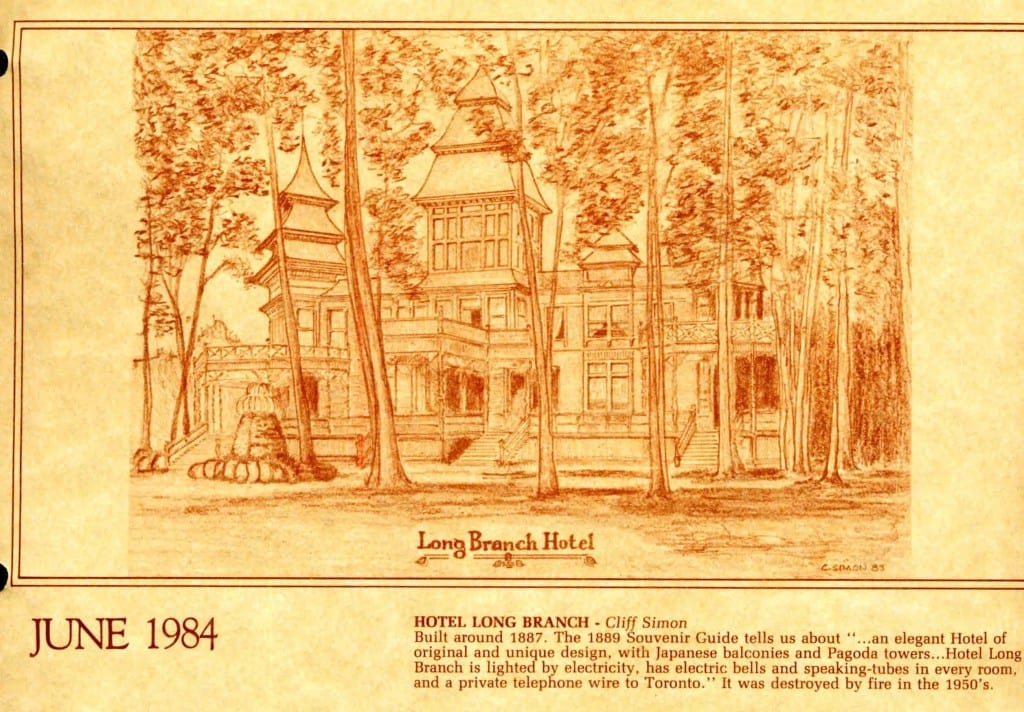 I have an interest in sharing information, related to history, that is in one way or another corroborated by archival evidence or other forms of evidence, including first-hand oral histories from a range of sources. Without such evidence, stories related to history are of minor interest to me.

For that reason, I’ve made a point of not venturing very far beyond the Colonel Samuel Smith homestead site when sharing information about Long Branch, unless I’ve had time to acquaint myself with the evidence.

This blog post seeks to share information in a tentative way, based on what little evidence I’ve acquainted myself with to date, about the history of Long Branch beyond the vicinity of Etobicoke Creek.

The following overview is based on an email that I circulated on Nov. 11, 2010 in connection with the Parkview School story:

Back story related to Smith/Eastwood homestead

Here’s a back story, which you probably know about, about the Smith/Eastwood homestead and the origin of ‘Long Branch.’

Bert Crandall notes that in 1883 three land developers bought about 64.5 acres from James Eastwood expecting to develop it as a summer resort. The land was surveyed and a plan registered as the Sea Breeze Resort. A year later they sold the land to Thomas J. Wilkie. He in turn had the Sea Breeze Resort plan resurveyed and registered as Long Branch Park.

Bert Crandall believes the Sea Breeze developers may have over-extended themselves as they were also seeking to develop St. Albans Park, a community in the Bathurst and Brunswick Streets area.

I would add the following comments. In an oft-quoted account of a visit to Samuel Smith’s property, the Scottish writer and reformer Gourlay complains that Smith had been slow to make improvements to his vast property. On his way back to York, Gourlay discovers the trail was so overgrown that he has no choice but to let go of his reins and allow his headstrong pony to find the way. Closer to York, according to one account, the pony refuses to jump into a stream to swim alongside a ferry and Gourlay has to choose an alternative route.

Thomas Wilkie at one point in his career with the YMCA needed take a break to restore his health. He recuperated in a country setting in what is now Long Branch. Around that time he was aware that affluent citizens from Toronto were seeking rest and recreation in Muskoka and Lake Simcoe. He promoted the Long Branch resort, a gated community, as an alternative destination. The resort was part of a trend across North America focusing on the restorative powers of nature in response to the processes of urbanization.

Excerpt from early description of May 6, 2012 Jane’s Walk

In 1871 a son of Colonel Samuel Smith named Samuel Bois Smith sold the Smith house and 500 acres of the colonel’s land to James Eastwood. The latter sold oak and pine from the property and rafted logs down Etobicoke Creek.

[A more recent blog post notes that the clearing of the forests were among the things setting the stage for later flooding at the mouth of Etobicoke Creek.]

Bill Rawson’s map shows where the hotel was located

After the May 6, 2012 Jane’s Walk in Long Branch, which Mike James and I led, I was pleased to meet Bill Rawson of Oakville, who has a used furniture store on the south side of Lake Shore Blvd. West near Thirty Third Street.

In preparation for the May 4, 2013 Jane’s Walk in Long Branch, I asked Bill, who grew up near the Long Branch Hotel, to draw a map of the area. We distributed the map as one of the handouts on our walk. You can click on the following maps to enlarge them. Use the ‘Back’ button on your browser to return to the page you are now reading.

Please note the valuable eye-witness report (see below) from Bob Richardson regarding the fire that destroyed the Long Branch Hotel in 1958.

[I would add that I think of 1958 as a year that has another significance. In my pursuit of understanding world military history, I’ve recently been reading Things fall apart, a novel by Chinua Achebe – published in 1958. In reading about colonial history, sooner or later one encounters the work of Chinua Achebe.] 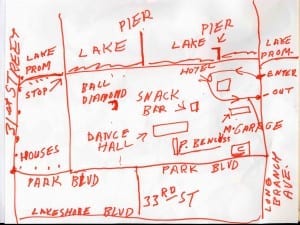 Part of the route for the May 4, 2013 Jane's Walk in Long Branch is indicated on a Long Branch subdivisions map. The map shows where infill was added to the shoreline at a relatively recent stage of the community's history. It may also be noted that before the infill, Lake Promenade did not extend in front of the property where the Long Branch Hotel was located. It terminated on either side of the property as the previous map, from the Long Branch Historical Society, indicates.

Item EY21.49 regarding Mimico 20/20 was adopted by Etobicoke York Community... Information related to building of Etobicoke Creek Trail in area of QEW bri...
Scroll to top