The comment from Sue Brady, who was in Mrs. Dunwoodie’s 11B (Latin) class, which I have featured in a separate post, included the following details: 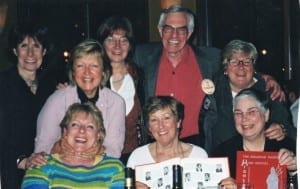 Sue Brady has posted photos of the latter mini-reunion:

Sue noted that the following Alumni, among her circle of contacts, are aware of the Reunion (but she does not know if they are planning to attend):

“Also deceased,” adds Sue Brady, “as you may know, is Marty Butler (11F, 1962). I believe he made a musical career for himself & we saw him playing piano at a club in Toronto many years ago.

“Re MCHS Reunion site – I read about Jack Mullaste’s passing (11F, 1963) — he was a fun guy & as I remember a wild dancer. After high school, in 1966, Jack and I carpooled together from Roxboro to our jobs at Rolls Royce on Cte de Liesse Rd, where I met my future husband Terry.”

Please note: As we have mentioned previously, Jack (Jaak) Mullaste, MCHS ’63, 11F, passed away on on January 18, 2005. A number of his friends including Howard Hight of Boston who knew him well are seeking to get in touch with his widow Jeanie Mullaste. If you can help in that quest please contact Jaan Pill at jpill@preservedstories.com

I knew Jack Mullaste well during a still earlier stage of life. Jack and I were both members of an Estonian Boy Scout troop in Montreal in the mid-1950s when we were children. We were also members of the same Estonian Lutheran church in Montreal, to which a large proportion of Estonian Montrealers belonged to at the time. I remember his parents; as I recall, and if my memory serves me well (sometimes it doesn’t, memories being malleable) they were both much involved in sports such as tennis.

I was interested to learn, in recent years while working on the Reunion, that some of my classmates from MCHS knew Jack Mullaste well during the years that followed our graduation from the school. I learned of his passing through reading notices in an Estonian-language newspaper published in Toronto. 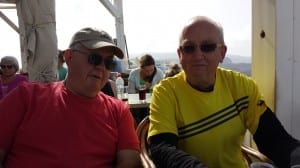 Howard Hight (left) and Wayne Grier, on a 2014 cruise holiday in Greece. Click on the image to enlarge it. Click again to enlarge it further.

“I remember you & Wayne Grier were friends at MCHS, don’t know if you still are in contact. An interesting story re Wayne’s sister Wendy & her neighbor in Beaconsfield which I’ll try to keep simple – Wendy is a good friend of my sister Laurie.

“We just found out last year that Wendy lives across the street from Tara Wright – they have been neighbours for a long time but neither of them knew their connection until Tara’s uncle (Butch Sprogis, aka Rheinie) came up in conversation. Tara is Virginia Sprogis’ daughter (Butch is Virginia’s brother). I don’t think Wendy knows Virginia, but she did know Butch!

“Of course if we didn’t change our names when we got married these connections would come about a lot sooner – I think Quebec has it right where women keep their maiden names – but on the other hand, how many hyphenated names will their kids & grandkids end up with?”

“Howard, congrats on having 9 grandchildren – quite an accomplishment! I’m sure your grandchildren enjoy your sense of humor – as I remember you & Wayne were quite a pair.

“In reply re Peggy Chow – I don’t know what happened to her but maybe could find out through Gail Currie who was good friends with Linda & Tom.

“I didn’t know you were part of the Amabaie gang. The Chows lived on the same street as Marilyn Drouin & Bruce MacDonald, also close to Billy Poole. Marilyn, Virginia & I get together every spring when Virginia comes out west (she has a daughter here in Vancouver).

“Marilyn (now Reigle) has lived on Vancouver Island for the past 7 years or so. Prior to that she spent all of her married life in Morin Heights, Que., a lot of it working at the ski hill.

“Another long(ish) story re Billy Poole et al – when I worked in Kingston ON we owned a farm in Bath, approx. 40 kms outside of Kingston. In 1992 I had a reunion there & invited a bunch of old friends, Billy Poole included. Fyi he still looked the same – great, as usual.

“He was living somewhere in the states but I’ve since lost touch. MCHS people that came to the event – Brian Barton, Neil Bacon, Joelle King, Virginia & Carole Spencer. The rest of the people were probably Catholic, so didn’t go to our school.

“I worked at the company’s head office in Kingston & we had a business meeting one year (mid-90’s) in L.A. Who did I meet there but Lynda Wilson (formerly Fuller). Turns out she was our Canada North director but I never realized we were in high school together until she drew the connection.

“We had so much fun & somehow she knew that Gaby Gluck & George Weinberger were there (I think either one or both was a gynecologist – we had fun with that too). Anyway we tried to contact them & I can’t remember if we did or not – maybe she could finish that story.

“I know Graham Webb quite well (we were in grade 3 together at Cartierville School and I think they had just come over from England). I didn’t really know Colin but saw him about 5 years ago when we were helping Graham move from Burlington to Niagara-on-the Lake.

“So since I won’t be at the reunion (spending time in Oakville in August with our Ontario grandkids), you’ll have to email your Rolls Royce story. Not sure if you owned one, but when I worked there you could pick one up for a cool $16k (about what we paid for our first home in Pierrefonds).” 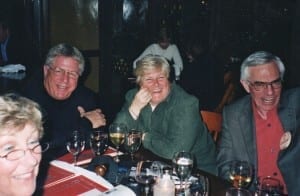 “Nice to see Bruce Wilde in this picture. The Goodman family and Wilde family were close neighbours on O’Brien.”

“The Wilde’s backed onto our property on Lavigne St.,” Bruce Goodman adds. “If Bruce sees this post…say hi to your brother Earl for me…one of my closest friends in the very early years. Many many days were spent playing road hockey on Lavigne, as O’Brien was far to busy as a main through street…even with an MTC bus route #117 on it.”