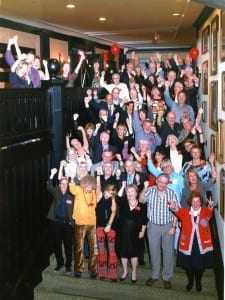 I graduated in 1963 from Malcolm Campbell High School (MCHS) in Montreal.

Over the past twenty years I’ve been meeting regularly for lunch in Toronto with one of my high school friends, Scott Munro of Dundas, Ontario, a geography professor, now retired, at the University of Toronto.

At times other high school classmates have joined us including Christine Hamilton, Howard Eisenberg, Peter Mearns, Carol Cassis, and Tim Hewlings among others.

As a follow-up to these meetings, I’m pleased to say that planning is now under way for a 1960s Malcolm Campbell High School Reunion to be held on Oct. 17, 2015 at Old Mill Toronto.

The MCHS 60s Reunion & Celebration of the 60s category at this website will feature updates regarding the early 1960s MCHS reunion.

We welcome comments, questions, and participation in the planning process.

We also have separate categories for MCHS Biographies and MCHS Stories.

Deadlines and events related to Oct. 17 MCHS ’60s Reunion & Celebration of the ’60s

Hope to see you at this great event!