It’s my hope that the photos accompanying this post will provide a quick overview of two of the Jane’s Walks walks in Etobicoke that took place on May 2, 2015. 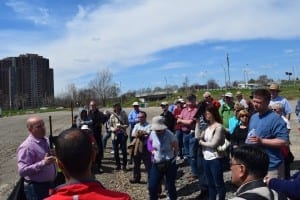 Saturday, May 2, 2015 was an active day for me. First in the morning I was involved with the Jane’s Walk led by MPP Peter Milczyn. The walk title was “Spaghetti Junction – The Farewell Tour.” It turned out beautifully. We had a rough start because the portable amplifier that I had brought for the event was not working but we found a technical solution pretty quickly. 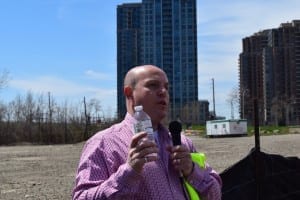 The problem turned out to be a defective mike cable, which we were able to get replaced without losing too much time, at the start of the walk.

Among other things, I found it of interest to learn exactly where the new entrance of the Kipling subway will be. I was also interested to follow the discussion about how the dust that arises during construction will be addressed, how the financial considerations involved with such a project will be attended to, what provisions have been made for green space, and how pedestrians and bicyclists will get around, once the new Six Points Interchange configuration is in place.

New Toronto – Then and Now

In the afternoon we had a Jane’s Walk in New Toronto entitled “New Toronto – Then and Now.” Mike James and Brian Liberty led the walk. Mike grew up in New Toronto in the 1950s and had great stories to share from those years, as did other walk participants including Ron Bayes, who was born, if I recall correctly from his comments, in 1932.  The past was brought to life before our eyes, as we walked along the streets and recalled events from the 1950s and beyond. 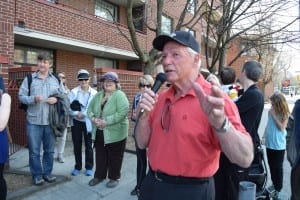 New Toronto was like a little village in those times. Long Branch was a separate village. Mimico was still another village. The kids in each village knew the boundaries, and knew to stay within them. That’s an aspect about New Toronto that Mike James has shared with me in the past. It’s a concept that has always stayed with me. I like that sense of geographical boundaries, in what is now south Etobicoke, during the years after the Second World War.

One of the stories that was shared concerned women who worked at the Campbell Soup plant – which is still in operation. Around the 1950s, one group of women had as their specialty the daily dealing with garlic. That’s what they worked with, all day long, at the plant. When they would get on the bus, one of the walk participants explained to us, the women who were working with the garlic would be directed by the bus driver to sit as far away from him as possible, because the smell of garlic was otherwise going to get on his nerves in a big-time way. 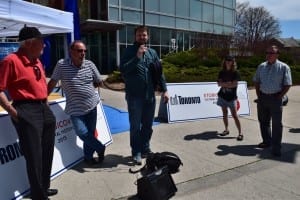 Brian Liberty is involved with many initiatives in the community. Among them is the work that is involved in the steps leading to the start-up of the Long Branch Neighbourhood Association. I first met Brian when he spoke about Community Gardens during a couple of Jane’s Walks that Mike James and I led a year ago, in May 2014.

Other people will lead Jane’s Walks in our local neighbourhoods in future. I will help with the technical end of things, such as the posting of walks at the Jane’s Walk website, but my own days of leading walks, and Mike’s days for leading walks, are gone and past. It’s time for a new generation of walk enthusiasts to step forward. Leadership succession is an important part of volunteer work, I’ve been learning, with the passage of the years.

I’ve really enjoyed the past four years of active involvement with the organizing of Jane’s Walks. I’ve met so many great people, and have learned so many new things.

One of the things that has, in particular, stayed with me is the fact that each year the walks have been different in so many ways, yet in each year the sense of energy and excitement, and enjoyment of being together and walking in the neighbourhood, is the one constant thing that has been the shared experience for all of us, who have been taking part in the staging and enactment of the walks.

Another walk I’m involved with, and much looking forward to, is this one: