I had the good fortune, early in August 2016, to meet for coffee with a teacher from Malcolm Campbell High School that I had not seen for 53 years.

I had last seen Graeme Decarie in June 1963, the year that I graduated from Grade 11.

That was just prior to September 1963, when Graeme resigned from his career as a high school teacher in order to pursue graduate studies – culminating in a PhD from Queen’s University in Kingston – in History.

The photos on this page are from a meeting at a Tim Hortons coffee shop in Moncton, New Brunswick in early August 2016.

Graeme Decarie likes to keep busy by researching and writing a daily blog post with a focus on what local newspapers are reporting from one day to the next. 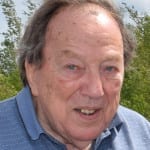 Graeme taught history at Malcolm Campbell High School in Montreal in the early 1960s. In the years that followed he became a highly regarded History professor at Concordia University, as well as a CBC Radio and CJAD Radio broadcaster. I feel most fortunate that I got to know Graeme at MCHS. He was not my History teacher. In the class I was in, Mr. Hanna was the History teacher.

I got to know Dr. Decarie in another way, during the 1962-63 school year. During that year, I served as President of the Student Council. I remember dealing with him with regard to the question of whether or not a particular film should be screened at the school. In the end it did get screened. 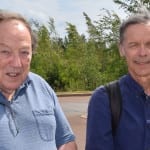 Some people have a good memory for what people said on such and such an occasion, such as during a debate about the screening of a movie at the school, but in my case what I remember is something about the characteristic body language and in some sense the essence of the personality of a given person.

In the case of Graeme, what I remember about him is a quality of equanimity, a sense of purpose, a sense of humour, a sharp mind, and a capacity to listen and quickly offer a cogent, succinct response to whatever the topic was, that we as students were discussing.

When I met Graeme once again, 53 years later, I recalled those qualities at once.

I could understand at once how it came about that he achieved outstanding success as a university professor, and as a broadcaster on television and radio in Montreal. He’s keen to listen, knows what’s going on, and is a born storyteller. 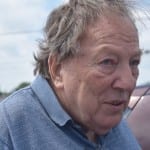 Among the above-noted posts you will find, by way of example:

We also have several posts in which Graeme shares work in progress in the category of Autobiography Stories:

I’ve begun work on my own Autobiography Stories and encourage you to do the same. I would not have gotten started, had it not been for Graeme’s suggestion that we get to work, and start writing our own stories. He’s explained that a person can start anywhere, as he has done, and just get to work.

In future posts, I will highlight a series of interviews that I conducted with Graeme, at a Tim Horton’s in Moncton where we met, and during a walking interview. We didn’t have time to walk through the marshes by the river, where Graeme Decarie likes to go to get his exercise, but we did spend plenty of time walking in the vicinity of the coffee shop.

For now, it’s my hope that site visitors will enjoy the photos that I’ve posted, and that you might feel inclined to look up Graeme Decarie on Google, and read some of his blog posts, which he reports are widely read by large numbers of people around the world.

The Rio Olympics refugee team finally has its own flag, and an anthem –... MPP Peter Milczyn’s 2016 Fall Community Corn Roast and Children’s...
Scroll to top