Steve Nazar has written an earlier post regarding a LAB (Local Appeal Body) meeting that he attended.

The following text is by Steve Nazar; it concerns a DPS (Development Permit System) meeting he attended:

Having been to the first DPS meeting on March 17th, I was struck by five issues –

1. There is an enormous backlog of mutual distrust in all three directions between

• City Planning, and the

DPS and LAB could be viewed as the Planning Department’s effort to bypass an entrenched and dysfunctional system. But the community groups remain to be convinced that this is not merely a rebalancing of power between the two other groups, with the communities squeezed out of influence – as usual. 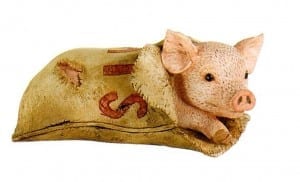 Pig in a poke. The image is from Google Images.

2. The DP system is only partly worked out. The elements that will determine how it will really work, remain a matter of hand-waving and assurances at these meetings. There are two consequences: we remain with a window of opportunity to set this system up favourably; and it is a very hard thing to sell, given its present roughed-out form. This was summarized by several speakers as “selling a pig in a poke”.

3. There was intense dispute over the “letter of the law” that will establish the basic DPS framework. I would hope that all parties would come better prepared to the next meetings, with supporting texts and references, and ready to defend their interpretation of those laws with reasoning. We have to have certainty about jurisdiction and appeal, or the new system is fundamentally in doubt.

Some speakers summarized this as “The Devil is in the Details”.

Regarding “community”, there is well-known technique of drawing geographical boundaries to achieve desired electoral results. It is called “gerrymandering”. Those who control the boundaries of each “community” to be consulted, will largely determine the apparent choices made for that DPS zone. Those selected to be minority interests, are just out of luck.

Regarding “consultations”: The people in almost any large geographical slice of the city will be heterogeneous, unorganized, and uninformed regarding municipal matters. Many residents expect themselves to be transient, or may only recently have arrived. Most residents are busy enough just managing their own lives. But DPS is complex and technical. In such a population, how can any form of “consultation” draw rules of lasting benefit to a defined area?

No matter how many DPS meetings are called, or websites posted, a “community” is not going to speak with a single, clear voice. So the real power lies with those staff or consultants who turn these meetings into recommendations for the local DPS bylaw. Those who do not like the organizers’ results will only have a brief period to organize their own expensive appeal.

As one speaker, a veteran of the Mimico 20/20 consultations put it, “The City said they wanted to ‘take the temperature’ of public opinion. But then only the City got to read the thermometer.’ ”

“Community consultation” sounds democratic, but it is actually the ultimate downloading of the system’s flaws and uncertainties onto the people least prepared to make decisions. As the most probable result, the outcomes will be manipulated by those with the most money and organization.

5. In the process of changing systems, we will in effect rezone all effected areas to new, less favourable standards in terms of density, height and public amenities. The existing zoning/COA/OMB system has already resulted in partial collapse of zoning intent. Any new standard must recognize what has already been built, and must allow for exceptional situations beyond that. There is no appeal system for “minor variances” built in, so some allowance must be made in the standard itself. Many interests will push for higher limits during those “community consultations”. The result will be a rush to the new maxima.

In summary, the weak points of the DPS system appear to be in the choice of DPS area boundaries, and in the designation of conditions for each DPS area through community consultations. So far, there are no firm specifics offered by the City staff for these two key stages. If communities are going to support this process, there need to be agreed procedures to give residents not only a collective voice in the choices, but a collective veto if necessary.

[Addendum from Jaan Pill: The Canadian Oxford Dictionary, Second Edition (2004) defines the expression “buy a pig in a poke” as: buy, accept, etc., something without knowing its value or especially seeing it.]