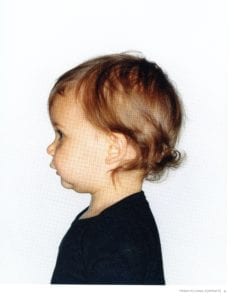 No.4, 2006 – From the Profiles III series C-type print, 1524 x 1211mm Courtesy the artist, Bettina von Zwehl, and Purdy Hicks Gallery. Source: 21st-Century Portraits (2013), available at the Toronto Public Library. Click on the image to enlarge it.

Photo by Bettina von Zwehl: Very young children demonstrate a characteristic – and impressive – sense of dignity, and powers of observation

From January to June 2011, Bettina von Zwehl was the Photography Artist in Residence at the Victoria and Albert Museum.

I learned about her work when I noted that one of her portraits, of a one-year old child, is included in 21st-Century Portraits (2013), available at the Toronto Public Library.

At the latter source, the text for the photo of the very young child reads:

A series of six monumentally scaled profiles of one-year-olds, von Zwehl’s Profiles III captures babies in a moment of complete concentration and alertness. Von Zwehl has said previously that for her the profile is one of the most powerful ways of representing a person. With this series, her first using children, she was aiming to ‘present each baby as an intelligent human being. The profile is a rare view in childhood and it gives them a powerful and graceful presence in the frame. Maybe it can provide a glimpse of what’s beyond the infant chaos we are familiar with.’

Chaos was undoubtedly part of the process – it took von Zwehl over a year to complete six final portraits, and the challenge of photographing the children staying still and in a specific position meant the use of toys, DVDs and parental assistance. The babies were seated on a table looking directly at von Zwehl, who then took the photographs using a long-cable release. Printed at three times their actual scale, these placid babies provoke a surprisingly serious contemplation of each of them as distinct humans, uncomplicated by tears, stains and screams.

I have posted this photo because I am impressed by what it communicates.

I began my teaching career (I am now retired from teaching) when I realized, in Vancouver in the later 1960s when I was a student at Simon Fraser University, that very young children demonstrate a characteristic – and impressive – sense of dignity, and powers of observation. My interactions with them convinced me that I was headed toward a career in education.

Until that time, I would not have thought for a moment that I would end up working in the public school system.

During my own elementary and secondary school years, I would not have imagined, even for a moment, that one day I would be working as a teacher.

The fact that I noticed these qualities, in infants and toddlers, meant that I, in turn, was seen by them (at once, and without hesitation) as an adult who had the capacity to tune into where they are coming from.

I began by working in the mid-1970s at a day care centre in Toronto as a substitute teacher, and from then moved on to working with children and adolescents in the public school system.

An Ontario Ministry of Education document, entitled How Does Learning Happen?, is of relevance with regard to this topic. The latter document speaks of the “image of the child”; it presents a view of the young child which corresponds to the view that I adopted, many years ago, based on my own observations. It’s a good document – I recommend it highly.

When you are selling your house in Long Branch (or anywhere), first do your... We had a great time (many entertaining stories!) at MCHS lunch meeting on Feb....
Scroll to top