I was interested to read an article, in the February 2018 newsletter of the Canadian Stuttering Association, about the Alexander Technique.

The article describes the Alexander Technique as a speech therapy technique that aims to address stuttering at the subconscious level, by releasing what is described as a subconsciously engrained form of muscle tension – that is, a form of tension that is outside of conscious awareness.

I’m not aware of evidence, in the research literature about stuttering treatment methods, that the way to address stuttering is by releasing a form of muscle tension that is outside of conscious awareness. Thus I would not quite agree that the Alexander Technique works as the above-noted article describes.

Based on descriptions of the technique that I’ve read, it’s my understanding, as well, that the Alexander Technique is not specifically a speech therapy technique.

I believe the technique may, nonetheless, be helpful in enhancing fluency among some people who stutter – by enabling us to be more fully conscious of (as contrasted to unconscious of) – specified ways in which muscle tension can interfere with fluent speech production.

Based on my reading of the evidence as reported in the research literature, I have the sense there are, indeed, some preliminary indications that the Alexander Technique may be helpful for some people who stutter, in some cases.

However, from what I can gather more extensive research, featuring studies with large numbers of subjects, is required before we can reach a conclusion regarding these matters, that is solidly backed up by the evidence.

I had a year’s worth of lessons in the Alexander Technique and Feldenkrais Method in the mid-1970s, in Toronto. In my case, the lessons did not improve my speech, but they did lead to dramatic improvements in my posture.

Some years later, I learned that in the Alexander Technique, a person is taught some very specific verbal directions, that can be called upon in everyday situations such as standing, sitting, or speaking. 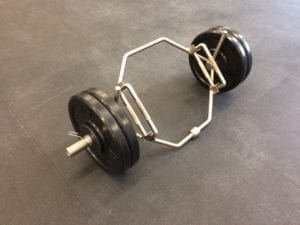 When correctly performed (correct form being essential), the hex-bar deadlift enables a person to achieve a more straightforward lift (which is, as a result, less taxing on the body) than is available with a conventional deadlift. That said, the (correctly performed) barbell-deadlift is a highly valuable exercise as well. Jaan Pill photo

In the decades that followed my year’s worth of Alexander Technique lessons, my posture began to slide downhill once again. However, I have subsequently found that a regular strength training routine, with a focus on multi-joint exercises such as the hex-bar deadlift – which I would not recommend to anybody, unless they have proper instruction – has enabled me to walk tall and stand tall, once again.

Fluency as a Second Language

Over 30 years ago, in my case, I re-learned how to speak. I like to say I learned Fluency as a Second Language. That’s how I learned to deal with my own stuttering – which in my younger years, was sometimes very severe; on some occasions, in fact, I was not able to get out any words at all. In the late 1980s, I attended an intensive, three-week speech clinic in Edmonton.

From the day I left the clinic, I constantly practised – and consciously applied – my newly-acquired fluency skills every day for many years thereafter. I regularly recorded two-minute segments of my everyday speech, and closely checked the recordings, to make sure I was applying my fluency skills correctly. That’s the approach to stuttering that has worked for me.

As a result of attending the Institute for Stuttering Treatment and Research (ISTAR) clinic in Edmonton, and consistently practising and applying my fluency skills every day for many years thereafter, I’ve achieved good control over my stuttering. I’ve made, by way of example, many presentations to large audiences, and appeared in many media interviews, over the years. If you do a search for my name you can find previous articles, and an online video, in which I outline what has worked for me.

The Edmonton clinic taught a particular way of dealing with stuttering. It is not, however, a way of addressing stuttering that will work for everybody. Each of us chooses how to deal with stuttering. That may mean getting good-quality speech therapy, or trying out the Alexander Technique, with a first-rate teacher of the technique, or it may mean not getting any stuttering treatment at all.

Jaan Pill is a retired teacher who lives in Toronto. His website is at www.preservedstories.com

Teachers of the Alexander Technique

Please note: I am not aware of the criteria whereby teachers are chosen for inclusion on the lists at the links below; in order to get the best value for money, care and due diligence with regard to the selection of a teacher is advised.

The Canadian Society of Teachers of The Alexander Technique (CANSTAT)

The Complete Guide to the Alexander Technique: How to find a teacher or course

Society of Teachers of the Alexander Technique (STAT)

Research regarding effectiveness of Alexander Technique

The above-noted article concludes that, with regard specifically to chronic or recurrent low back pain, “Six lessons in the Alexander technique followed by exercise prescription was almost as effective as 24 lessons.”

Evidence for the effectiveness of Alexander Technique lessons in medical and health-related conditions: a systematic review, PubMed (2012)

The above-noted 2012 article concludes that: “Strong evidence exists for the effectiveness of Alexander Technique lessons for chronic back pain and moderate evidence in Parkinson’s-associated disability. Preliminary evidence suggests that Alexander Technique lessons may lead to improvements in balance skills in the elderly, in general chronic pain, posture, respiratory function and stuttering, but there is insufficient evidence to support recommendations in these areas.”

A search for Alexander Technique at PubMed yields about 20 research reports about the technique.

A British Stammering Association article, posted in 2003, offers anecdotal evidence regarding the application of the Alexander Technique to the enhancement of fluency in a person who stutters.

Of related interest: How to read and understand a scientific article, Patient Empowerment Network (2017)

Research regarding causes of stuttering