On April 4, 2018, I attended a meeting of the Long Branch Neighbourhood Association at the Royal Canadian Legion Branch 101, which is located on Lake Shore Blvd. West near the Long Branch GO station. The location is a short walk from the Mississauga-Toronto border.

The key topic was the Long Branch Neighbourhood Character Guidelines, as I will report at a separate post. 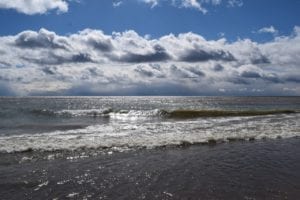 West beach at Marie Curtis Park, which is located south of the Long Branch GO station on the Lake Ontario shoreline, April 4, 2018. Jaan Pill photo. Click on image to enlarge it; click again to enlarge it further.

In a separate series of posts, I have also been posting transcripts from a YouTube video of the Nov. 14, 2017 Etobicoke York Community Council meting, at which the Character Guidelines were unanimously adopted.

In my upcoming report on the April 4, 2018 meeting, I have recreated the Q & A, which was at the heart of the meeting, as a re-enactment of what took place, using paraphrases of what people said, instead of using direct quotations of any kind.

The purpose of the current post is to share some reflections, that have occurred to me, concerned with some cultural differences, between how things are done in Mississauga as compared to Toronto.

The back story proceeds as follows.

When I report on public meetings I often record them, to ensure my quotes are accurate, as is standard journalistic practice.

With regard to the April 4, 2018 Q & A, however, I was not permitted to make a recording, in either audio or video format.

That made for an interesting state of affairs.

I did not record the Q & A, and no direct quotes are included in the text that I’ve created. Instead, the whole Q & A has been written as a series of paraphrases – in a sense, a re-enactment, based on my notes from the meeting – of what took place.

Whatever protocols are in place, regarding a meeting that I’m interested in writing about, I follow closely. Most of the time, I am free to record at will; the current circumstance (that is, with regard to permission to record at the April 4, 2018 meeting of the Long Branch Neighbourhood Association) is an exception.

By way of illustration of recording practices elsewhere, last year, among many other public meetings that I have attended in Mississauga over the past decade, I attended the Oct. 11, 2017 AGM of the Lakeview Ratepayers Association. 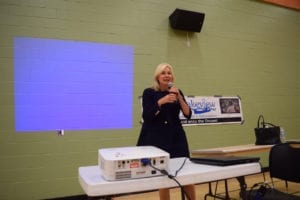 Among the speakers at the latter meeting were Ward 1 Councillor Jim Tovey and Major Bonnie Crombie among other City of Mississauga officials. I audio recorded the entire event, and video recorded key segments. Nobody questioned, for a moment, what I was doing there, and asked me if I had permission to record.

Mind you, in my work as a blogger, writing news reports about Mississauga – in my role, as I like to say, as a “foreign correspondent” blogging from Long Branch – it’s been clear, from the start several years ago, that Jim Tovey was a strong supporter of my website.

Everybody could quickly figure out, that is, that Jim Tovey liked the fact I was writing detailed posts about innovative, community-driven, Mississauga-based projects, such as the Lakeview Waterfront Connection project and equally innovative redevelopment projects in Port Credit.

In Toronto, City officials are, perhaps, a little less aware that bloggers can serve beneficial roles in their communities, and can – if so permitted – help to get the story out, regarding great initiatives that may be happening, in local communities located to the east of the Mississauga-Toronto border.

That said, Toronto has a different culture, in relation to attitudes toward citizen engagement, based on a different history, and thus it makes sense that each municipality will approach things in the way that best suits their purposes.

In terms of atmosphere at urban-planning meetings, on occasions such as recent meetings in Port Credit, where developers, residents, municipal officials, and politicians get together, in Mississauga the “feeling in the air” on such occasions is typically good-spirited, with respect for each person’s point of view, and a distinct sense of “We’re in this together.”

The sentiment, most frequently encountered, at such meetings, is: “We know for sure, that we can find a way that will lead to a great design, that in the end will closely reflect the key positions of all of the sides, without exception, in this suitably spirited debate, that we all have the pleasure to be engaged in.”

In Toronto, at least in south Etobicoke, the atmosphere, at meetings concerned with land-use planning issues, at times the atmosphere is good-spirited, as at meetings of the Long Branch Guidelines Advisory Group, which had a series of meetings during development of the Guidelines.

Feeling in the air, when land-use planning is the topic at hand

At other times, as toward the end of the April 14, 2018 Q & A, the “feeling in the air” that “we’re all in this together” tends to be absent. Not infrequently, Toronto residents express anger at such meetings, and not infrequently, City officials deal with the situation by shutting down the discussion.

I have yet to encounter a situation at a similar meeting in Mississauga, where a City official would have felt it necessary to shut down a discussion, in response to the fact that residents were not satisfied with the answers they were hearing.

The underlying reality, in the case of the Mississauga land-use planning meetings, that I have attended over a period of close to a decade, is that officials are genuinely interested in the views of residents, and make every effort to ensure their views are closely taken into account. Given this reality, it would be unlikely for a discussion to be terminated, in the way that it regularly occurs, from what I have observed, at similar meetings in Etobicoke.

The differences in approaches, reflecting divergent cultural histories, is among the subjects I am exploring for an upcoming book about the local histories of the waterfront communities on either side of the Mississauga-Toronto border.

Microplastics in water: Concern that particles of less than 150 microns can... Opposition to lot-splitting/overbuilding: April 4, 2018 Long Branch Neighbourhood...
Scroll to top