What is characterized as decent, honourable, and loyal depends upon the context in which the terms are used 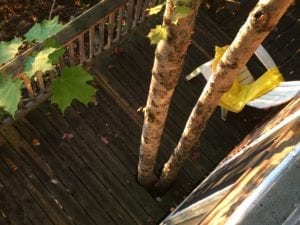 Trees growing through mid-level deck at steep-hillside cottage in Ontario. The photo is from a recent post highlighting our stay in Summer 2018 at rental accommodations north of Peterborough. Jaan Pill photo

The Road to Disaster: A New History of America’s Descent into Vietnam (2018) offers a valuable overview of lessons learned – taking into account the contemporary record, extensive oral history interviews, and research from cognitive science and psychology – with regard to how leaders characterized by the author as good, decent, best, and bright lost their way in the Vietnam War.

They lost their way because the mindsets that they had set into place, on the basis of previous successes in handling a wide range of extremely challenging situations, were useless – and in fact, much worse than useless; they were absolutely disastrous – in new circumstances.

I am not an American. I am thankful to America for the role the country played in both the First World War and the Second World War. That role has a direct bearing on the fact I am sitting here, at a laptop at a nice little town in Southern Ontario, enjoying a nice rainy day.

I am thankful that the Second World War turned out as it did, and did not turn out in some other way. My own background, which influences my own mindset, and my own understanding of history, is outlined in previous posts including one entitled:

My family fled as refugees from Estonia in 1944; they were among the ones who survived the journey

The editing of the text in the book has been extensive, to the point – in my perception as a reader – of having been worked at, at length, to the extent that it appears overworked and overwritten. I am, in this context, reminded of articles in Newsweek, Time, and Life magazine, which I read extensively as an adolescent growing up in Montreal in the 1960s. By the late 1960s, I had stopped reading such publications. The style of writing had, by that stage of my experience as a reader, given rise to a sense of sandpaper being drawn across my skin.

The book in question has a style that is not in any way as grating, in my experience as a non-American reader, as the publications mentioned in the previous paragraph. It is, indeed, much more of a congenial read. However, I do note that the adjectives widely featured in the book can at times give rise, at least in my own anecdotal experience as a reader, to a feeling of queasiness, of unease.

I think, in this context, of the fact that the beginning of the book emphasizes that the leaders who led America into the Vietnam War were decent, good, and the best and brightest of their generation.

What occurs to me is that what is defined as decent, good, best, brightest, honourable, and loyal depends upon the context in which the terms are used.

Essentially, what I have concluded is that the terms are useful – but absent of precise definitions of what is meant by them, their usefulness is limited.

I believe the book in question is tremendously valuable on the whole. I very much like the idea of bringing in recent research from cognitive science, when discussing history.

It also occurs to me that the mindset, ignorance of history, and arrogance that was associated with the launch of the Vietnam War has been repeated many times over, as in the run-up to the American invasion of Iraq some decades later.

As in Vietnam, the new kids in town – that is, what was then the newly elected regime in Washington – believed with regard to Iraq that the world was plastic, readily malleable in the hands of the brightest, and of the most powerful and self-assured of people, and that reality itself was subject to vast projects of revision.

Reality has a track record of biting back, in response to efforts to tinker with it. That is to say, with the passage of time, reality obtrudes, and makes its presence known.

The Road to Disaster (2018) is a first-rate study; I recommend it highly.

In the Vietnamese War, 3 million Vietnamese and 58,000 Americans died.

Let us not forget, for a moment: 3 million Vietnamese died in the Vietnam War.

With regard to the 58,000 Americans killed, it has been recently noted (as I’ve highlighted at a post mentioned below) that more Americans have now died from ingestion of opioids than died in Vietnam.

How I became interested in reading about the Vietnam War (or the American War, as I understand it is known in Vietnam)

We Were Soldiers (2002) is pretty accurate, notes Robert Mueller, who seldom mentioned his Marine service

Other posts addressing the Vietnam War include:

Reporter: A Memoir (2018) and Bring the War Home (2018) address history and legacy of Vietnam War

Jonathan Shay speaks of moral injury in Achilles in Vietnam: Combat Trauma and the Undoing of Character (1994)

The above-noted post notes that more Americans have succumbed to opioids than had perished in the Vietnam War.

The erasure of history

A recurring theme in history is the ongoing erasure of it, including with regard to Myanmar, as noted at a previous post:

A related concept concerns accuracy in reporting about local history, a topic that I became interested in starting in 2011. I’m pleased that quite a few people have visited a longread post about local history, that I wrote while staying at a hillside cottage by a lake north of Peterborough:

A May 13, 2019 Yale Environment 360 article is entitled: “Fifty Years After, A Daunting Cleanup of Vietnam’s Toxic Legacy: From 1962 to 1971, the American military sprayed vast areas of Vietnam with Agent Orange, leaving dioxin contamination that has severely affected the health of three generations of Vietnamese. Now, the U.S. and Vietnamese governments have joined together in a massive cleanup project.”

An Aug. 9, 2019 CNN article is entitled: “Southwest pilot flew his Vietnam veteran father’s remains back to the place where he last saw him 52 years ago.”