Like many people, I’ve spent plenty of time around large airplanes and huge airports but for the first time I recently also visited a much smaller airport where I could watch small planes (and a small helicopter) landing and taking off.

The occasion was a Fly-In Charity Breakfast starting on the morning of Sunday, June 2, 2019 at the Stratford, Ontario airport. 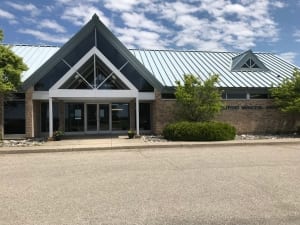 I was impressed with these little “flying machines” (as I heard a very young child, who marvelled at the sight of them, describe them) as they arrived and took off again. I had not realized how small such planes can be. Some carry just one person. The sight of a very small airplane, when I first saw one up really close on this occasion, was most entrancing.

Pilots would land, spend an hour or several at the charity breakfast which was set up in a large hanger, and then take off again travelling back to wherever they had arrived from.

I liked the concept that people who share similar enthusiasms – in this case for flying in private aircraft – would get together on regular occasions, just for a chance to hang out and socialize (and in this case, also to raise money for the Stratford General Hospital Foundation). 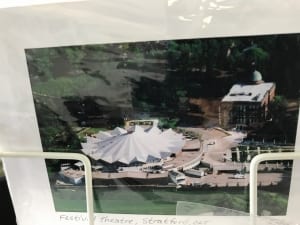 I was reminded of an account about Indigenous peoples in Northern Quebec, which described an annual meeting I think around the 1960s or thereabouts of Cree families, whose annual hunting journeys covered a great expanse of wilderness.

The families would meet once a year at a particular location; perhaps it was by a specified boulder or rock formation at a particular river or confluence of rivers. I don’t remember the details but I found the image evocative: a single place in nature – in what remained of relatively untouched wilderness in Canada at that time – where families of nomadic hunters would meet once a year. If I recall correctly they were in pursuit of caribou. That image has stayed in mind for me. I spent a lot of time in the Canadian wilderness in those years and I could picture such an event and would have some degree of awareness of its tremendous significance and meaning. 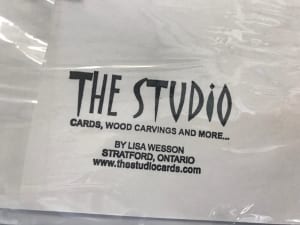 The image indicates the source of the above-noted card. Jaan Pill photo

At this post I will mostly dispense with links to specific books or resources. I will include a single link, however, later at this post, to a brief video clip from the official opening of Othello at the 2019 Stratford Festival.

An author named Boyce Richardson was likely the person who referred to this once-a-year-meeting.

He wrote a book entitled “Strangers Devour the Land,” or else that was the title of the documentary that he also put together, on the same theme.

Before making his documentary and writing the above-noted book, Richardson had been working as a reporter with the Montreal Star, an English-language Montreal newspaper widely read at the time, when Montreal had two English newspapers. The other paper was the Montreal Gazette, which remains in publication.

In a book by Richardson that I read, or at some other printed source, the author comments that he quit working for the Montreal Star because he realized that the kinds of things he wanted to write about were not going to be published by such a paper. Every publication has to have a sponsor, in other words. In the case of the post you are now reading, I too have a sponsor. This post is indirectly sponsored but the Ontario Teachers Pension Plan, to which we owe many thanks.

My only exposure to relatively small planes has been in British Columbia in the 1970s on a couple of occasions when I flew on a small plane (possibly a flying boat) from Prince Rupert to Haida Gwaii. On one occasion I also flew on a small plane to Victoria from Vancouver. In those years I heard, from American war resisters (they had fled to Canada to avoid being drafted during the Vietnam War) that I met about an annual boating get together on the West Coast. 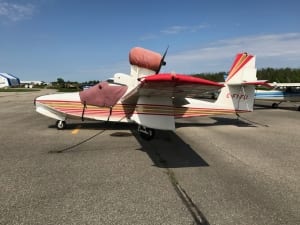 Hippies with small boats would travel from everywhere along the coast, once a year, to meet at some remote island, to spend some time together sharing stories and having a good time. I never attended such an event but I found the concept evocative and enjoyable. Although I had given up the smoking of weed by the 1970s, having decided that strategies related to meditation and the like would be a more orderly way to explore and refine one’s consciousness, I imagine that such get togethers would have been enlivened by the smoking of a great deal of good weed.

There were good things associated with those days, and less good things also. Among the good things from my perspective was an experience I had on the east coast of Haida Gwaii, walking along the beach north of Queen Charlotte City on a summer day in the early 1970s. 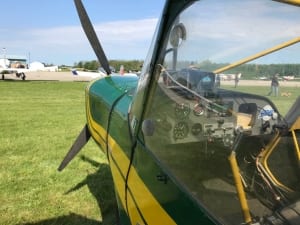 You could walk literally for kilometre after kilometre along the shore in those days and encounter nary a trace of civilization. All you saw was the shore, the water, and the edge of a rain forest. A thought occurred to me: “Let this image be seared in your memory. Carry it with you forever. This was what the entire globe was like, not that long ago. Remember this moment always.”

Which I have done.

The sight of the small helicopter at the Stratford airport fly-in charity event also prompted me to think at once of the Vietnam War, a topic that I’ve written about at some length in previous posts.

When I was a teacher working with the Peel District School Board, I once attended a presentation at the Living Arts Centre in Mississauga. The occasion was a professional activities day, as the day was called. Large numbers of teachers were gathered together that day to hear a talk by a researcher who specialized in stress disorders and related topics. 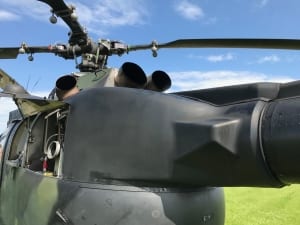 The presenter described a case of a Vietnam War veteran who was experiencing PTSD symptoms years after he had returned to the United States. The veteran in question would experience symptoms of PTSD, every time he heard the sound of a particular civilian or police (I forgot which kind) helicopter flying overhead at night. A particular frequency, of the sound emitted by the helicopter, would trigger his symptoms. As I recall, the researcher made arrangements with the local authorities to ensure that these particular helicopter flights were diverted, so that the veteran could get a good night’s sleep. At any rate, the story went something along those lines. The details escape me.

Another thing I thought about, when I saw the helicopter at the Stratford airport, was the new (new, at that time) American military doctrine, introduced at the lead-up to the Vietnam War, that helicopters would play the same role as American cavalry had played, during the battles against Indigenous peoples in the American West.

Visitors from the business world often arrive by corporate aircraft at the Stratford airport on their way to special occasions at the Stratford Festival. It’s a short drive from airport to Festival Theatre.

Money and power can among other things be the source of insights, as Shakespeare has noted. It’s what happens with power – all of the delicious events that arise, in particular circumstances, in relation to it – that classic plays such as Othello are concerned with.

I very much enjoy seeing Shakespearean plays performed at the Festival Theatre in Stratford.  Live drama performed by first-rate actors, directed by a first-rate director, on a stage specifically designed for Shakespearean performances, is an ideal way to access storytelling.

Opening night for a performance such as Othello, which in the 2019 season is one of the plays featured at the Stratford Festival, is a big event.

In a book of essays published in 1965, Tyrone Guthrie, the first artistic director at Stratford, who played a key role (along with Tom Patterson and many others) in getting the festival launched in 1953, remarked that opening nights offer a great opportunity for the Best People to show off their august presence.

I would say that Guthrie had a sense of irritation, regarding the Best People. Although he had been raised in the British upper middle-class, and educated at an upper-crust boarding school (an experience that decidedly did not inspire him) and later at Oxford, he had a sense of egalitarianism. Perhaps, one could say (or at any rate, I will say), he could sense that what is real has more value than what lacks a genuine spirit of reality.

In his experience, the audiences who really connected with the plays at Stratford and who could really appreciate the performances, in the early days when he was there, were the everyday people who began turning upon on nights after the opening night had come and gone.

Update regarding PTSD and wartime experiences

At this post I have referred to PTSD experiences of war veterans. A June 8, 2019 BBC article, which discusses the topic in depth, is entitled: “The long echo of WW2 trauma.”

But for Prof Siobhan O’Neill of Ulster University, the most obvious way for a parent’s trauma to affect a child would be by hindering the development of a strong and secure attachment between parent and child in the early years of the child’s life.

“It’s pretty well accepted that an impact on the attachment between parent and child will impact on mental health,” she says. “A traumatised parent can have difficulty forming a secure attachment with the child, and families that have been affected by violence, that are rife with drug and alcohol abuse – dysfunctional families – this is detrimental, and children may not do as well.”

She also finds “plausible” recent research that suggests the effects of trauma could be inherited by means of chemical changes to the surface of genes, altering the way they behave. This field of study is known as epigenetics; the relationship between the genes and the chemical changes to their surface (epigenetic marks) has been compared to the relationship between the hardware and software of a computer.

A June 16, 2019 Guardian article – which brings to mind the ongoing relevance of Shakespeare’s plays – is entitled: “The Best People review: how Trump flooded the swamp.”