As always, the opinions expressed are David’s.

The following report is from David Godley of Long Branch:

Volodymyr Zelinsky was inaugurated as President while I was in Kyiv. By trade he is a comedian and defeated the “old guard” by gaining nearly 75% support. His only political experience was playing President in a TV soap. His party “Serving the People” only began in 2018 and is named after the TV show.

According to a Ukrainian expat, who had driven down from Birmingham to visit relatives, this was a vote against “the System”. The corruption of Soviet times had continued, with some improvements, into the free market era. 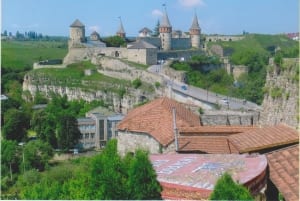 Ukraine is oriented to the west and gradually integrating into the EU, although formal membership is probably at least a decade away. While many Ukrainians speak Russian there is a stronger western orientation since the invasion of Crimea and especially the war in Dombas which was Ukraine’s manufacturing heart. As part of Russian “diplomacy” two eastern Provinces are ruled by Russia, seemingly to destabilize the country and keep it from joining NATO. Invasion of a NATO country automatically means war with all NATO countries.

Currently Ukraine looks poor and somewhat run down. This has the advantages of affordability for the tourist and observing life that once was, especially in the bucolic countryside. However you can see in the new buildings that there is confidence with designs, better than we get in North America. A slow upgrading of historic architecture, which has been left intact due to a weak economy, is taking place. As with architecture in general, dress is quite different from most of the rest of Europe. Many women wear flower embroidered tops.

According to Lonely Planet, Ukraine is as safe as Western Europe (outside the war area). That was my experience with people who are laid back and good hearted. They even stop at pedestrian crossings. Police corruption was dealt with in 2014 after the previous election. I was charged $5 for the repair of a slow puncture when a less honest person could have charged more. 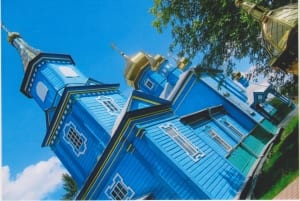 Ukraine is the largest country wholly in Europe. It has a population of about 40 million, more than a quarter of Russia’s. Canada has the largest diaspora of Ukrainians outside Russia.

Ukraine is one of the world’s most religious countries and the number of Orthodox churches both old and new are testament to this. Many have golden domes which gleam in the sunshine. As well as hundreds of new churches there are thousands of new gold encrusted shrines. Some are privately built and placed in front gardens. Decorations are often in blue which reflect the country’s colours. Blue represents the sky and yellow the grain fields. These religious edifices are uplifting wherever you go.

There are tens of thousands of large new houses, perhaps owned by those who benefitted from “the System”. These are guarded by decorative wrought iron gates and built like fortresses. The block part of the outside walls are over one- foot wide and the inner walls nearly one-foot wide. Ceilings are made of concrete. The complex roof structures and the angular and playful designs represent a new vernacular. Commercial buildings, often more colourful, are also rich in imagination.

Lviv, formerly a regional capital in Austro Hungary, and later transferred by Stalin from Poland to Ukraine, has the feel of a different era and faded glory. I had to buy bread from a hole in the wall store (it was warm) and milk in a silver pouch, separately.

There are extensive, rather restrained, art nouveau buildings in the almost unspoilt downtown. The occasional new buildings fits in well. It has been dubbed the Paris of the East but it is much more dilapidated and prettier. A large town hall has the square tower and built within a large square; both typical of Ukraine. The stone sets which make up the roadways are often wavy due to inadequate foundations, which fortunately slows traffic.

Kyiv is a six-hour rail journey away averaging just under 100km per hour. There are no stops in between. Coaches can convert to sleepers for day or night if you travel (ridiculously cheaply) first class. So you have the option to sleep all the way.

I stayed at the Ibis hotel, part of the French Accord group, near Kyiv railway station. There is also a Metro station there if you can find it as it is unmarked. With Hrivnia currency you can buy plastic buttons for under 20 cents each and slip it into the barrier and you have access to the world’s deepest subway.

Downtown is full of richly decorated Russian era buildings as well as centuries-old ecclesiastical buildings. The Lavra with its multiple golden domes is Ukraine’s most holy site. Kiev is about the same size as Greater Toronto whereas Lviv is about the size of Greater Hamilton. Kiev started as a port on the wide Dneiper River. Lots of high rise now join the old Soviet apartment blocks.

Other towns are worth visiting such as Podilsky which has a fairytale castle and Ivano which is extensively pedestrianized and pretty well all the buildings are photogenic. To get there I drove the famously potholed roads. Even getting out of the airport there was a bone shaker. In the Carpathians I was diverted because of flooding to a supposedly main road which consisted of 100km of potholes. Often the roads in towns are the worst.

However along the way is pleasant countryside with buttercup meadows, people walking cows on a lead along verges and the occasional horse drawn plough. The Carpathians close to the Romanian and Hungarian border are the most scenic areas and most of the rest of the country is rolling and good farmland; the bread basket of Europe. Ukranians claim genocide for when Russia starved the area, as well as others, in the 1930s.

Ukraine must be watching Poland with its booming economy and living standard that has now been designated first world. Hopefully the old system will have been largely eliminated and the country can concentrate on developing the economy and improving infrastructure, especially filling in potholes.