I may have had an earlier post about George Allan at this website. If it existed, it is now gone due to technical issues related to this website. Thus I post the current version.

I owe thanks to Graeme Decarie for keeping me updated about George Allan.

The following text is from an online obituary for George Allan:

It is with great sadness that the family of George Bernard Allan announce his sudden, peaceful death at his home in Sarnia on May 15, one week after he celebrated his 85th birthday. 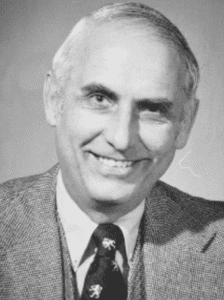 Dear father of David Allan (Katrina Chang) of Taipei, Taiwan and Sara Allan (Clive Cook) of Seattle, WA, USA. Loving grandfather of Sadie, Max and Nathaniel Cook and of Kassandra and Kendrix Allan. He will be fondly remembered by his former wife Janet Allan of Gravenhurst and by his brother Richard Allan (Marlene Allan) of Toronto. He will be missed by the members of his and Janet’s extended families and by many friends.

The son of C.R. Malcolm and Sara (Gallagher) Allan, George was born in London, Ontario on May 8, 1935. His father’s career with the Bank of Montreal involved many moves for the family which resulted in George attending many different schools in Toronto, Windsor and Montreal. It was his grade nine year at the University of Toronto Schools that imbued him with a love of learning and appreciation of excellent teaching.

He received his B. Eng. (Chem.) degree from McGill University in 1959 but after working briefly in that field, he followed his true calling and entered the teaching profession. It was a time of innovation in the teaching of Mathematics and he became an enthusiastic participant in the “New Math Era”. After teaching at Malcolm Campbell High School in Montreal and chairing the Mathematics Department at Bishop’s College School in Lennoxville, Quebec, he was awarded a U.S. National Science Foundation Fellowship at Bowdoin College in Brunswick, Maine, where he obtained his M.A. in Mathematics in 1967.

At that time, the Community Colleges in Ontario had just been established, and the exciting prospect for George to be part of the founding teaching team at Lambton College brought him and Janet to Sarnia. During his 27 years at Lambton College, George contributed greatly to its success both as a teacher and as an administrator, including as Academic Vice President and as President (1983-85).

After his retirement in 1994, he was able to devote time to passionate interests – golf at S.G.C.C., cinema (he was a founding Board member of cineSARNIA) and travels in Greece where his interest in Greek history and archaeology led to his joining and becoming the treasurer of the Canadian Institute in Greece located in Athens. Over the years George took great interest in the Sarnia community and was appreciative of the city’s amenities and the people who made his life there so interesting. He especially enjoyed being a grandfather and strove to pass on his unquenchable intellectual curiosity to his grandchildren.

His family wish to express their appreciation to two very special friends whose support allowed George to spend his final years in his home – Gaetane Leroux and Marta Kamila Zalezak. Sincere thanks also to the terrific staff from Shine at Home, the caring nurses and receptionists at the CCAC wound clinic and the helpful drivers at United Taxi and at Care-a-Van.

A virtual memorial service will be held on Saturday, June 6, 2020 at 11 am EDT. All who knew George are invited to join. Details on how to access the service will be posted on George’s Facebook page and on the McKenzie & Blundy Funeral Home website.

Throughout his life, George enjoyed time spent at his ancestral family home in Wroxeter, Ontario, and the cemetery in Wroxeter will be his final resting place.

Arrangements entrusted to The McKENZIE & BLUNDY FUNERAL HOME & CREMATION CENTRE, 431 Christina St. N., Sarnia. As an expression of sympathy, friends who wish may send memorial donations to The Sarnia Community Foundation, 110-560 Exmouth St., Sarnia, N7T 5P5 or to the Lambton College Foundation, 1457 London Rd., Sarnia, N7S 6K4. Messages of condolence & memories may be left at www.mckenzieblundy.com
Published on May 19, 2020

An online document mentions George Allan’s work as an educator.

Charles Tsiang (from a Facebook post): From his obit in The Observer: “It was a time of innovation in the teaching of Mathematics and he became an enthusiastic participant in the “New Math Era”.” Mr Allen was the one who fed my emerging excitement studying math in MCHS. As I made my way through MIT as an undergraduate engineer I often thought of the contribution Mr Allen made to the way I approached problem solving. In more recent times, looking back at the MCHS years through our 60s Reunion FB page, I’ve wondered what had become of Mr Allen and if someone would recall their interaction with him. I found an old photo and scanned it. It shows GBA standing next to the blackboard, arms akimbo and stare penetrating Jimmy Pantelidis’ back as he tries to explain f(x). Those piercing eyes. I miss him and wished we could have spoken again. 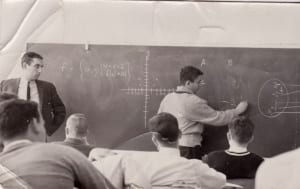 BTW, the blackboard plot does not properly represent f(x) since it is only defined for x between 1 and 2, and therefore (-2,2) and (-1,1) should not be up there. Lee Bartholomew is thinking, “I’m not going to tell Mr. Allen that!”

I’ve heard similar comments about MCHS math teachers who’ve had a strong and positive impact through their work in the classroom. I’m reminded of an earlier post about another first-rate math teacher:

André Picard sums up current coronavirus situation – Globe and Mail, May... Investigation of the Peel District School Board – text of report of May...
Scroll to top