At a recent post, I’ve added, at the bottom of the text, a series of comments that will work well as a separate post. 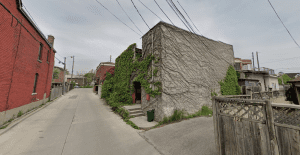 A previous post deals with laneway housing in Toronto. The screenshot is from Google Maps, posted in March 18, 2021 Daily Hive article entitled: “A brief history of Toronto’s laneway houses and how they came to be.”

In the comments I note that, given a writing project that I’ve been working on the past couple of years, I’ve become interested in looking at things from the perspective of land use – in terms of specific local cases such as laneway housing and, with equal interest, in more general, more abstract terms.

In that context, I’ve been reading intensively – all the while while keeping closely in mind the concept of land use decision making – about a wide range of topics including, by way of example, evolutionary biology.

A book I’ve found really interesting to encounter is The Social Instinct: How Cooperation Shaped the World (2021) by Nichola Raihani.

Cooperation is the means by which life arose in the first place. It’s how we progressed through scale and complexity, from free-floating strands of genetic material, to nation states. But given what we know about the mechanisms of evolution, cooperation is also something of a puzzle. How does cooperation begin, when on a Darwinian level, all that the genes in your body care about is being passed on to the next generation? Why do meerkat colonies care for one another’s children? Why do babbler birds in the Kalahari form colonies in which only a single pair breeds? And how come some coral wrasse fish actually punish each other for harming fish from another species?

A biologist by training, Raihani looks at where and how collaborative behavior emerges throughout the animal kingdom, and what problems it solves. She reveals that the species that exhibit cooperative behavior – teaching, helping, grooming, and self-sacrifice – most similar to our own tend not to be other apes; they are birds, insects, and fish, occupying far more distant branches of the evolutionary tree. By understanding the problems they face, and how they cooperate to solve them, we can glimpse how human cooperation first evolved. And we can also understand what it is about the way we cooperate that has made humans so distinctive – and so successful.

At the above-noted link, you can find additional reviews and other information – all of it of much interest.

What’s next in the United States?

The concept of land use is of relevance with regard to evolutionary history along with other facets of history such as geological, political, social, and economic history among a vast array of other facets.

A related concept is space use – again, at both the concrete and the metaphorical levels.

When I speak of history I also think of historiography – that is, about how history is constructed, which depends on who is doing the constructing, and who the intended audience happens to be.

In that context, I was interested to read, at the Toronto Public Library website, a Dec. 31, 2021 Globe and Mail article by Thomas Homer-Dixon.

We are dealing, in this article as elsewhere, with land use – and with space use. In the latter case, we are also dealing  with what is happening within our brains and minds (minds being embodied within bodies, networks, and structures) as we seek to make sense of what we see, hear, and otherwise experience.

The article is entitled: “The American polity is cracked, and might collapse. Canada must prepare: The U.S. is becoming increasingly ungovernable, and some experts believe it could descend into civil war. What should Canada do then?”

Thomas Homer-Dixon is executive director of the Cascade Institute at Royal Roads University. His latest book is Commanding Hope: The Power We Have to Renew a World in Peril (2020).

An excerpt from the Globe and Mail article reads:

But one can’t blame only Mr. Limbaugh, who died in early 2021, and his ilk for America’s dysfunction. These people and their actions are as much symptoms of that dysfunction as its root causes, and those causes are many. Some can be traced to the country’s founding – to an abiding distrust in government baked into the country’s political culture during the Revolution, to slavery, to the political compromise of the Electoral College that slavery spawned, to the overrepresentation of rural voting power in the Senate, and to the failure of Reconstruction after the Civil War. But successful polities around the world have overcome flaws just as fundamental.

What seems to have pushed the United States to the brink of losing its democracy today is a multiplication effect between its underlying flaws and recent shifts in the society’s “material” characteristics. These shifts include stagnating middle-class incomes, chronic economic insecurity, and rising inequality as the country’s economy – transformed by technological change and globalization – has transitioned from muscle power, heavy industry, and manufacturing as the main sources of its wealth to idea power, information technology, symbolic production and finance. As returns to labour have stagnated and returns to capital have soared, much of the U.S. population has fallen behind. Inflation-adjusted wages for the median male worker in the fourth quarter of 2019 (prior to the infusion of economic support owing to the COVID-19 pandemic) were lower than in 1979; meanwhile, between 1978 and 2016, CEO incomes in the biggest companies rose from 30 times that of the average worker to 271 times. Economic insecurity is widespread in broad swaths of the country’s interior, while growth is increasingly concentrated in a dozen or so metropolitan centres.

Two other material factors are key. The first is demographic: as immigration, aging, intermarriage and a decline in church-going have reduced the percentage of non-Hispanic white Christians in America, right-wing ideologues have inflamed fears that traditional U.S. culture is being erased and whites are being “replaced.” The second is pervasive elite selfishness: The wealthy and powerful in America are broadly unwilling to pay the taxes, invest in the public services, or create the avenues for vertical mobility that would lessen their country’s economic, educational, racial and geographic gaps. The more an under-resourced government can’t solve everyday problems, the more people give up on it, and the more they turn to their own resources and their narrow identity groups for safety.

America’s economic, racial and social gaps have helped cause ideological polarization between the political right and left, and the worsening polarization has paralyzed government while aggravating the gaps. The political right and left are isolated from, and increasingly despise, each other. Both believe the stakes are existential – that the other is out to destroy the country they love. The moderate political centre is fast vanishing.

And, oh yes, the population is armed to the teeth, with somewhere around 400 million firearms in the hands of civilians.

Stories from behind the Berlin Wall

Another aspect of land use decision making concerns the history of Europe before, during, and after the Second World War.

By way of example, I’ve been interested in how interviews and archival resources have been put to use in quite different ways in accounts about events in Europe before and after the fall of the Berlin Wall.

I’ve come across two books about the Stasi police of the former East Germany. Each deals with evidence; each makes a contribution to a reader’s understanding of the postwar era.

One of the books is called Stasiland: Stories from Behind the Berlin Wall (2003) by Anna Funder.

During its 40-year history, the German Democratic Republic – East Germany – was, with Soviet assistance, the perfect police state. The organ of surveillance within the GDR (as well as foreign intelligence activities) was the Stasi, which, better than any other modern secret police, had organized a large army of citizen informers. Australian writer Funder thoroughly documents that culture of domestic spying and its effects on a cross-section of East German society. To call the stories that she relates as Orwellian is rather an understatement; the fact that they are true alone goes beyond Orwell: the mysterious death of a husband while in detention, the sudden “nonexistence” of a rock star, a mother’s separation from her critically ill infant. What the reader learns from these stories is that evil swings like a pendulum, from the banal to the surreal, but no matter where it is in the spectrum, it always leaves pain behind. –Frank Caso
From Booklist, Copyright © American Library Association. Used with permission.

A second study is entitled: The Firm: The Inside Story of the Stasi (2010) by Gary Bruce.

Based on previously classified documents and on interviews with former secret police officers and ordinary citizens, The Firm is the first comprehensive history of East Germany’s secret police, the Stasi, at the grassroots level. Focusing on Gransee and Perleberg, two East German districts located north of Berlin, Gary Bruce reveals how the Stasi monitored small-town East Germany. He paints an eminently human portrait of those involved with this repressive arm of the government, featuring interviews with former officers that uncover a wide array of personalities, from devoted ideologues to reluctant opportunists, most of whom talked frankly about East Germany’s obsession with surveillance. Their paths after the collapse of Communism are gripping stories of resurrection and despair, of renewal and demise, of remorse and continued adherence to the movement. The book also sheds much light on the role of the informant, the Stasi’s most important tool in these out-of-the-way areas. Providing on-the-ground empirical evidence of how the Stasi operated on a day-to-day basis with ordinary people, this remarkable volume offers an unparalleled picture of life in a totalitarian state.

What do we know about dealing with evidence?

Comments from residents and developers regarding draft of new City of Toronto... “The Medium of the Archive” is an article by Elizabeth Dauphinee...
Scroll to top