What are the next steps for the archives of the Long Branch Historical Society? (post of June 9, 2012)

The Long Branch Historical Society is currently deciding what to do with its archives.

Over the past year, I’ve been gathering information about the options available to us.

This is a small part part of a story being played out at one level or another across Canada.

Some local communities are able to find a secure, permanent local repository for their archives, are able to digitize their records for online viewing, and can provide easy access to the records for anyone who wishes to visit the archives in person.

With regard to the archives of the Long Branch Historical Society, we need to move our archives out of the storage space where they are now located, and have not so far found an alternative space. What options are available to us, in the circumstances? 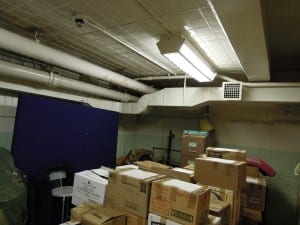 On the left is a vintage washing machine (covered in green plastic). At the back is a filing cabinet with documents. In the foreground are a portion of the archival materials that have been donated to the Society over the years. The cartons visible in the photo comprise about a quarter of the total numbers of cartons in the room. Jaan Pill photo

The contents must be easily accessible

We owe thanks to the people who’ve contributed archival materials over the years. We have a responsibility to these individuals.

We also have a responsibility to current and future residents of Long Branch. People have an interest in Long Branch history. The sharing of information from the archives will help to keep our local history alive.

In the course of my research about options worth exploring regarding the archives of the Long Branch Historical Society, in December 2011 I came across a comment by Dave Cook, a member of the Society who’s written extensively about local history, that has stayed with me.

Dave’s comment was that an archive has value to the extent that its contents are readily available to people who are seeking local historical information. Under ideal circumstances, you turn up at some facility, explain what you’re looking for, and a person is on hand to help you find what you want.

During an early stage of research, I also learned that the archives of the Toronto Island community had been donated to the City of Toronto Archives.

I also learned, at that early stage of my research, that an agreement had been reached whereby the Toronto Island community could, possibly, take back the archives in the event a suitable facility for archival storage and display became available on Toronto Island.

This arrangement is an exception to the general rule, which is now uniformly in effect, that if local archives are handed over to the Toronto Public Library or the Toronto Archives, then whichever facility receives the archives will take ownership of them.

I’ve spoken with many other people in the course of my research. By way of example, I’ve spoken with Jane Fairburn, whose book Along the Shore about the history, landscape, and people of the Toronto waterfront including the Lakeshore, will be published in 2013. She described her experiences referencing privately and publicly-held local history collections throughout the City of Toronto. 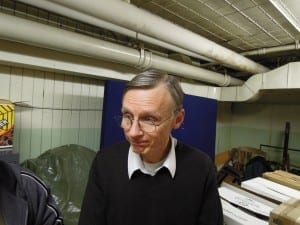 Archival documents must be kept together

In March 2012, members of the Society met at the archives storage room with Richard McQuade, Director of Archives at St. Michael’s College School at the University of Toronto.

One of the key messages he shared with us was that if a particular person has, years ago, contributed a number of cartons of archival documents and the like to the collection, it’s essential that such documents be kept together.

This is, he explained, a basic principle that archivists adhere to.

Information about cross-links among items – for example, about photographs about the same historic building – can readily be made available in a database.

Under no circumstances, however, would it be recommended that photos or documents from different collections of cartons be separated from their cartons and stored together as a collection of photographs or documents all dealing with the same subject.

Ownership of archives is usually taken over by the facility that assumes responsibility for cataloguing, storing, and making them available

In the course of my research, I’ve also met with officials of the Toronto Public Library and the City of Toronto Archives.

My meeting with Toronto Public Library officials was a follow-up to an executive meeting of the Society in the fall of 2011, at which time I received authorization from the Society to gather information with regard to a possible transfer of archival materials to the Toronto library system.

As a result of an email that I had sent to David Juliusson, Program Officer, Historic Fort York, City of Toronto, I also got in touch with Michele Dale, Supervisor, Collection Management and Standards, City of Toronto Archives

I was especially interested in the story of the Toronto Island archives. The archives, Michele explained, have gone through two incarnations.

Peter Holt’s documents constituted what was called a ‘permanent loan.’ This meant, as I understand, that Peter Holt maintained ownership of the materials. Such an arrangement would not be possible today. The Toronto Archives has not made such an arrangement for many years.

His widow, Emily Fulton, had ownership of the Wychwood Park archives, and donated them to the Toronto Archives.

She wanted to do the same for the Toronto Island archives. There was interest in the local community, however, to keep the archives on Toronto Island.

The problem was that Emily Fulton could no longer accommodate the Toronto Island archives, housed in about twelve filing cabinets, in her Toronto Island cottage, which had become her permanent residence. The archives were moved to a building where there was a restaurant on the main floor and storage space for archives on the second floor.

The problem, however, was that the archives were not secure in this setting, and no one was managing the materials. This situation became a source of concern for the community.

Consequently, Emily Fulton, Peter Holt, and Adam Zhelka formed a corporation called the Toronto Island Archives, Inc. The corporation acted as the donor of the materials. There was an attempt to get a ‘permanent loan’ arrangement.

As Michele Dale explained to me, from the viewpoint of the Toronto Archives, there is no reason that can be advanced in favour of a permanent loan for the contents of local archives.

It is not in the interest of the Toronto Archives to invest so much time and effort into something if ownership is not transferred to the Archives.

In the case of the Toronto Island archives, the standard template for an agreement regarding the donation of archival documents was in fact changed.

In this case there is agreement that if at some point in the future the Toronto Island community is indeed able to establish an archival repository, and provided that they could guarantee that they can provide easy public access, then the Toronto Archives may consider returning the records.

Such a case is highly unusual. The records from Toronto Island are special. There’s a huge interest in Toronto about Toronto Island. Albert Fulton had done a great job in the organizing of the archives. Both sides worked to arrive at a compromise.

The Toronto Island community is, as I understand, happy with the outcome. The records are now available to everyone in Toronto, whereas before they were easily accessible only to people on Toronto Island. 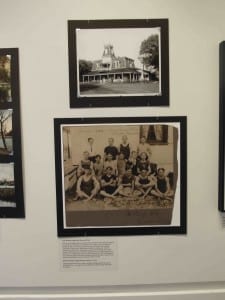 If a local historical Society in Toronto were to decide to donate their archives, they can choose between the Toronto Public Library and the Toronto Archives.

I asked Michele Dale if, in her view, there was an advantage to one or the other.

Michele said that both institutions would care for the records, and that the Society would be safe in choosing one or the other.

She shared a number of points:

First, if the Long Branch Historical Society’s archives end up at either the Toronto Public Library or the Toronto Archives, they will be preserved. If they’re left in a parking lot or driveway, they would not be preserved.

Secondly, at either facility, the materials would be accessible to anyone who has an interest in Long Branch history.

She noted that the Toronto Public Library or the Toronto Archives would be able to provide a larger outreach to the public, in terms of access to materials, than a local historical Society would typically be able to provide. Among other things, the materials would in time all be described in an online database.

How an archives works

I’ve been looking forward for some time to learning about how to go about doing archival research, an activity that I’ve avoided until now because I’ve been able to learn a great deal through other means of research – including speaking with people who have spent years doing archival research, and conducting oral history interviews with long-time residents of Long Branch.

Given that I have an interest in getting started with archival research, Michele Dale described to me a key aspect of how archives are organized at a facility such as the Toronto Archives or the Archives of Ontario.

The essential point – and, she explained, many people “don’t get this” – is that a key principle for archivists is to keep the records of a creator (an individual, a company or an association, for example) together. Unlike a library, which groups individual books on the basis of subject, an archives will group records on the basis of creator. This means that the records of the Long Branch Historical Society will always be kept together if they are donated to an archives. The technical term for this way of keeping things together is ‘fonds.’

An online dictionary that I consulted defines fonds as the “entire collection of the records originating from the same creator, archived with other such collections.”

Archives try to maintain the records of a creator together. Using a fonds system, the records of a given creator of records are kept together so that they reflect the activities of that creator.

Libraries, if I understand correctly, take a different approach. They deal with discrete items. The Oxford English Dictionary (2004) defines discrete, in the sense it is used here, as “(1) separate or individually distinct; (2) discontinuous; consisting of distinct or individual parts.”

Michele Dale added that archives are interested in unique records. They don’t as a rule have room for copies.

You’re invited to a presentation on June 26, 2012 at 7:30 pm – “Heritage... Michael Harrison will talk about The Estates of Mimico Beach on Tuesday, June...
Scroll to top