I have developed a series of posts featuring case studies of relevance to the Wesley Mimico United Church redevelopment project.

The sketch below represents a proposal shared at a Jan. 28, 2013 community forum related to the Wesley Mimico redevelopment. 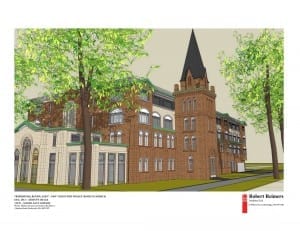 Previously I’ve discussed Ontario heritage preservation legislation as it relates to places of worship. as I’ve noted, “The preferred use of a heritage place of worship is its original one,” according to A Guide for Conserving Heritage Places of Worship in Ontario Communities. 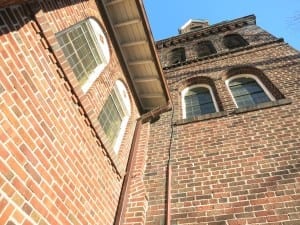 Wesley Mimico United Church. On the left is part of the addition completed in 1954. On the right is the bell tower from the original church building completed in 1924. Jaan Pill photo

1. Wesley Mimico United Church at 2 Station Road was built in two phases beginning with a structure completed in 1924, followed by an addition completed in 1954. 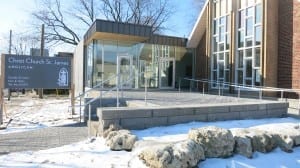 2. Christ Church St. James Anglican building at 194 Park Lawn Road near the Humber Bay Public Library is a source of interest for me because a recent addition includes a focus on the attribute of transparency. Such a focus on transparency is also evident in the proposed redevelopment of Wesley Mimico United Church, as described at a Jan. 28, 2013 community forum.

3. A church-to-condo conversion project has been completed at 152 Annette Street in Ward 13 – Parkdale-High Park. 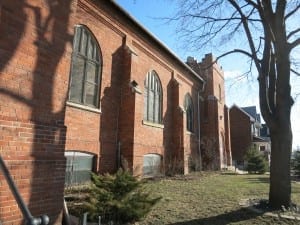 4. A church-to-condo project at 243 Perth Avenue has been highlighted in a Toronto Star article. The large parking lot at the back of the building will provide space for construction of an additional building. The original church building and addition will be the sold as condo units.

5. A church-to-condo conversion project at 21 Swanwick Avenue has been completed. A report notes that proposed alterations to the building, as part of conversion process, are acceptable in order to accommodate the new use for the church. 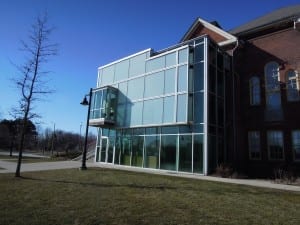 6. The Assembly Hall at Kipling Avenue and Lake Shore Boulevard West is an multi-use community building which features an interesting adaptation involving the addition of a wide set of stairs within a partially transparent enclosure that has been added to the outside of the century-old building. The Assembly Hall illustrates the adaptive re-use of a significant heritage resource. The attribute of transparency is also evident in recently built structures such as the visitors centre at the Toronto South Detention Centre.

7. Several other buildings are of interest with regard to adaptive reuse. They include Bethel Green Seniors Residence and Asbury and West United Church. As well, they include the Deer Park redevelopment.