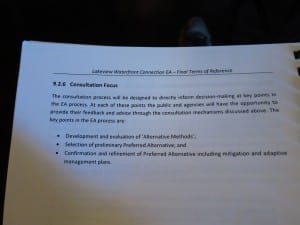 At 6:00 pm on August 21, 2013, I attended a meeting at the Long Branch Legion with about eight or nine local Toronto residents and about the same number of officials connected with the Lakeview Waterfront Connection Environmental Assessment project.

I look forward to the large-scale public consultation that will occur early in October 2013.

I found the August 21, 2013 small-group meeting highly valuable. The discussions were of much interest. The meeting involved the sharing of a wide range of viewpoints. 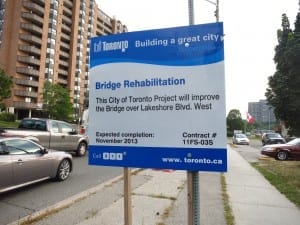 I had the opportunity to acquire a great deal of information, and like other residents at the meeting, had the occasion to express my views.

I believe in evidence-based practice, in whatever activity a person engages in.

I think as well that it’s worth underlining, from time to time, that no one individual resident, however forceful, eloquent, or persuasive, represents the essence of a community’s desires. What each resident has to share is highly important, and warrants close consideration.

The Lakeview Waterfront Connection Environmental Assessment project will be sharing an overview of the meeting.

Among the local residents who was at the meeting was David Switzer of Long Branch.

He remarked after the meeting that some of the information and perspectives that he heard at the presentation and discussion have convinced him to take a fresh look at the question of the sand beach at Marie Curtis Park, within the larger context of the Lakeview Waterfront Connection Environmental Assessment project, and of all of the trade-offs that are involved.

When time permits, in future, I will transcribe a brief interview that I did with David Switzer after the meeting. 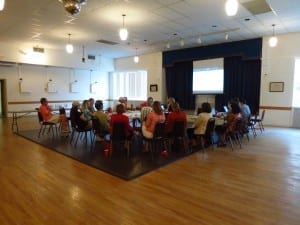 A fact at the meeting, that really caught my attention, was the indication – inaccurate, as it has subsequently turned out – that the Mississauga-Toronto border at the shoreline of Lake Ontario actually ends just east of the current location of Applewood Creek, rather than just west of it.

In previous blog posts I had been asserting (correctly, as it turns out: please see following paragraph) that the border ends just west of Applewood Creek. 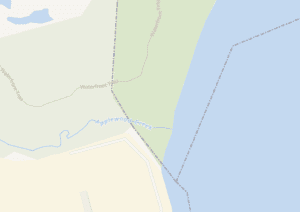 Gosur Map of Ontario indicates that western border between Mississauga and Toronto is located to the west of Applewood Creek.

[I have on March 20, 2019 consulted a Gosur Map of Ontario and have learned that the border is in fact west of Applewood Creek.] 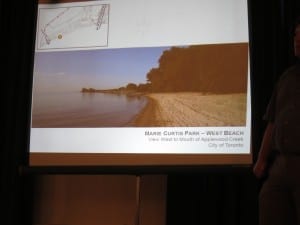 At the outset, the meeting established the context for the Environmental Assessment process, as noted in the last two photos at the bottom of this page. Much ground was covered during the meeting.

The discussion at this and other meetings and consultations will lead to refinement of proposals that will be shared at the public consultations that will take place – and are well worth attending – early in October 2013.

[Update: The anticipated meeting will be late in November 2013. End of Update] 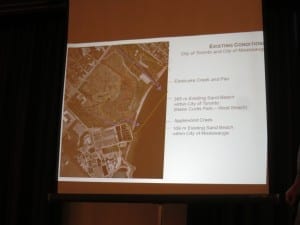 This image provides additional information related to the sand beach. 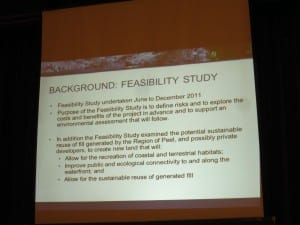 Click on image to enlarge it. Use the ‘Back’ button on your browser to return to the page you are now reading. 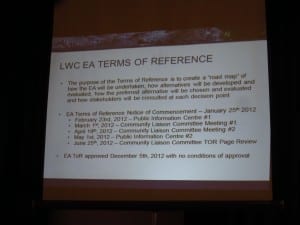 Click on image to enlarge it. Use the ‘Back’ button on your browser to return to the page you are now reading