Report by Steve Nazar on Feb. 18, 2014 meeting regarding the Local Appeal Body as a possible replacement for OMB in Toronto

I’m pleased to share with you the following information:

Councillor Mark Grimes’ Office has shared some information with me, in reference to a comment made in an earlier blog post concerning notifications related to the ongoing Local Appeal Body consultation meetings.

The information about the LAB consultations has been on Councillor Grimes’ website since February 2014.

The notifications about the Local Appeal Body consultations have been circulated for the past four weeks (I’m writing this message on March 12, 2014) on the Councillor’s eNews mailout, to which residents can subscribe at the Councillor’s website. It is anticipated it will be in this week’s eNews as well.

As well, email notices have been sent from Mark Grimes’ Office to a list of stakeholders, including Business Improvement Areas (BIAs), the Mimico Residents Association, and others.

I’m pleased to share with you the following text from Steve Nazar of south Etobicoke (see also a text from Geoff Kettel):

Subject: Possible creation of LAB, Local Appeal Body, to replace OMB in Toronto. City staff reported their findings and proposals, and wished to hear resident comment. This was one of a series of such meetings to be held around the city. 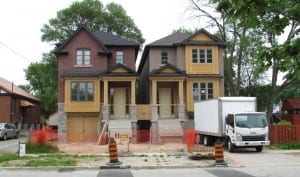 I had two hours notice of this meeting, and that only because Ruth Grier circulated a notice. I arrived 20 minutes late. We seem to have a failure of the notification process if it depends on networks of email contacts. There was no mention of it in Councillor Mark Grimes’ regular newsletter. Despite promises of notice for the second meeting (North York, February 24), I received no notice of that one either.

[Editor’s note: Councillor Mark Grimes’ Office has indicated, on March 12, 2014, that LAB notifications have in fact been extensively circulated, from the Councillor’s Office. Please see note at the beginning of this post. I’ve also posted this point of information as a separate post.]

Attending were about 20 persons, half of whom spoke at least once. The City staff were well into a Powerpoint slide presentation and the atmosphere was rather formal. There were Helen Bulat and Mario Giambattista and one more offside. Susanne Pringle, administrator of Committee of Adjustment (COA) office and possibly other City staff attended in the audience.

The presentation concerned LAB objectives, empowering legislation, the form it might take and projected costs. A five-member board of four part-timers and one full time chair, and some office staff, was what I recall being proposed.

Through this there was much shuffling and sighing from audience, because this didn’t seem to be getting to the issues people attending appeared to wish to see addressed.

There were lengthy details of how LAB members would be remunerated per diem and per written decision. My somewhat flippant comment was “Don’t pay members for their decisions, pay them for their review and preparation.”

I mentioned this because at both COA and OMB I have seen adjudicators arrive without previously reading any of the case materials. These materials had taken both sides of a dispute a lot of time and a lot of money to prepare.

Comment (later) has been that for $58,000, there will be very few competent people to take the positions. Although part-time, such work would constitute a conflict of interest for people in related industries.

The City staff seemed very concerned that funding LAB could be a contentious matter, and repeatedly raised the question of whether substantial fees should be to be charged to applicants, much higher than the $125 fee for OMB appeal, or whether the City should be paying some or all of the LAB cost. If the full cost of an appeal were borne by the applicant, it would be about $6000.

Statistics of appeal from Committee of Adjustment to OMB were presented, but were not parsed according to which party appealed. This made them meaningless. Rate of appeals had been fairly constant. The City staff suggested that this indicated no great dissatisfaction with COA. The audience suggested these numbers greatly understated the dissatisfaction with COA. For example, “Big Money” developers could appeal, but individuals often would not, because of cost.

My comment (and other audience members contributed) was that OMB typically costs each party many tens of thousands of dollars in lawyers, architects and planners. There was already a huge asymmetry between developers on one hand and neighborhood members on the other, in their financial capability to pursue a case. My question to the City presenters was what was going to be different about LAB versus COA? Specifically, how would the new body address this asymmetry?

Peggy Moulder then questioned why they had not looked at appeal practices in other provinces such as in Vancouver, or in New York. City folks replied that other jurisdictions were too different in their governing legislation, and that they could only work within the constraints of present Toronto and Ontario laws.

Peggy Moulder advised that this was entirely unsatisfactory, a symptom of unresponsive government, and the City staff should not be presenting until they had done their homework. Much of the audience expressed a wish to finish the business at hand, so we continued. However this had the effect that all formality in the meeting collapsed, and the slide show was abandoned (or perhaps had been completed).

I asked who had attended from the builders or developers. No one identified themselves. All attending seemed to be neighborhood activist types.

There was much discussion of creeping intensification. Generally the audience believed there was both ignorance and wilful disregard of the City Plan by OMB and COA. Every change has been toward higher density, with no attention to nature of neighbourhoods, or proper place for intensification.

We got into the subject of how LAB would be any different from COA. It was not clear how members would be chosen any differently, despite an attempt at clarification of the COA hiring method by Susanne Pringle. The latter City official pointed out that COA was ultimately controlled by voters’ choices of elected councillors.

There was repeated reference to the problem of “What is a minor variance”? Examples were ample of COA stretching the notion of minor until it was big enough to sink a neighborhood.

Paul Chomick offered criteria for members of (any of) COA, LAB or OMB . They should, he said, be visibly credible, competent, and accountable.

Peggy Moulder recommended the NYC [New York City] model of Community Councils, and invoked a “wisdom of crowds” solution: large numbers of representatives of a neighborhood would better represent that neighborhood. At the least neighborhood council would add an element of “bottom-up” governance rather than the present inaccessible “top down” governance.

One audience member related a recent meeting (organized by Donna Cansfield?) that concluded the City should provide comment on each and every COA case (OMB case?) and be adequately staffed to do so. My comment elsewhere in the discussion was similar: that the City staff should be explicitly empowered to offer reasonable defence of the City bylaws, and that they may presently feel themselves too constrained to be “neutral”.

Susanne Pringle explained that another alternative being discussed was “DPS”, a local development permitting system. This mechanism, if chosen, was claimed to be designed not to be bypassed by any form of appeal, versus “site specific bylaws” which can be over-ridden by appeal bodies.

However, Mario Giambattista noted requirements added to the DPS by the City can be negotiated. Others have since suggested that this would make the DPS a blank slate, and potentially useless.

In summary, the City staff expressed surprise because they had thought there was a wish for this LAB. Audience consensus was that so far it did not address the problem of asymmetry in powers of applicants.

[This concludes the text from Steve Nazar]

Symbolic interactionism, some critics assert, doesn’t attend to the “big... Wesley Mimico update – a second submission for the rezoning applicati...
Scroll to top