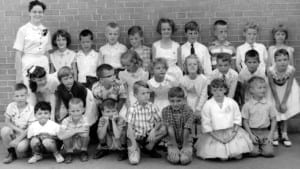 This photo is from a link (see Comments section, below) that Robert Crone has shared with us. He notes that the spelling is Morison not Morrison. It’s great to have that information!

I was very pleased to receive a comment from Yvonne regarding a previous post about Cartierville School, which was attended by some of the students who attended Malcolm Campbell High School, for which a Sixties reunion is planned for Oct. 17, 2015.

As well, Robert Crone has added a spelling correction – only one “R” in Morison – in an additional comment. He’s also shared a link to the photo that you see on the left. If you go to the link, you can see the names of the students – or at least the names that are know.

This is a good time to catch up on what people have mentioned in recent emails about Cartierville School.

First, Lynn L. has mentioned that she too went to Cartierville Public School, along with Marianne and Linda K. Barclay A., Doreen V., Diane L. to name a few.

Barclay played pro ball and last Lynn heard he and Linda S. (his wife) were living out west. Lynn also remembers Howard H. as she too went to Cartierville school up to grade 7.

“It only went to Grade 7,” Lynn reports, “then I did grade 8 at Town of Mount Royal and then onto Malcolm Campbell. We were bussed into Cartierville School, from Saraguay, as well as the kids as far as Dollard if I remember correctly, plus of course Cartierville itself. The school was still open in the early 60s became a English Catholic school if I remember correctly, will check this with Marianne [K]. It was on the west side of the town across from the sanatorium. I remember Belmont Park, snuck in many times through the back river area.”

Lynn also mentioned the Cartierville Boating Club, which she mentioned has a not recently updated web page: http://www.cartierville.org/

Another person has mentioned: “Come to think of it, I lived in the same place on St. Germain all through school and I got bounced around to Elmgrove, Parkdale, Laurentide and Morison. I think MCHS [Malcolm Campbell High School] had kids from all of those schools.”

As well, a number of us attended grade 8 at Montreal High: “MCHS was still under construction,” as one email has noted, “and we didn’t go there until grade 9.”

Among the people remembered from the High School of Montreal are Mr. Mitchell, the Scotsman who taught us Latin. There was also Mr. Scott that taught music. As well, from grade 8, I remember our homeroom teacher, Mr. Levine. A veteran who would sometimes share stories with us about his experience in the Second World War, Mr. Levine once gave me a written assignment as a penalty for some classroom infraction.

I had to write an essay of about 2,000 or 3,000 words – I forget the exact word count – and it had to be handed in the next morning. I assume kids hated getting that kind of a punishment. He expected I would work all night after school to get it done. Instead, as soon as I was told of the punishment, I began writing the essay at once, while sitting at my desk. For the rest of that day, while Mr. Levine was talking and classes were proceeding, I was writing, keeping eye contact with him from time to time, to show I was paying attention to the lesson, and focusing on my writing at every other moment that was available to me. Then at the end of the day, I presented the essay to him, with a flourish. It was a well written essay. I knew that because I could write well and got good grades in English Literature and Composition.

I know it made an impression on him. Years later, a friend of mine told me that Mr. Levine would sometimes stop to tell his class the story of this student, who was in his class years before. He would explain how he’d handed out this very long essay assignment to the student as a punishment, expecting he would have to work on it for hours and hours at home after school. And at the end of the day, Mr. Levine would explain, the student comes up to the teacher with a big smile and says, “Mr. Levine, here’s your essay! It’s exactly the length that you requested!”