The Humber River starts at Ontario’s Niagara Escarpment; experience shows it’s best to not build housing on its flood plain

The Niagara Escarpment is a notable feature of the Ontario landscape. 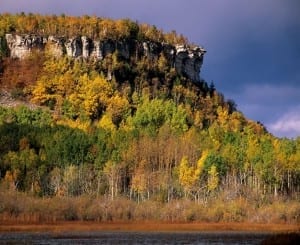 Recently while driving between Dundas and Kitchener, I had the occasion to stop at the escarpment, which began 450 million years ago (see below) as the bed of a tropical sea.

I have long had an interest in The Physiography of Southern Ontario, Third Edition (1984), and have recently bought my own copy, given that the copies of the book at the Toronto Public Library have missing pages and/or maps. 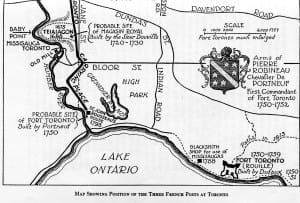 Hurricane Hazel brought devastation to Toronto exactly 60 years ago today, on Oct. 15, 1954. The green areas on the Hertz Toronto Car Rentals map on the left – you can click on the image to enlarge the map; click again to enlarge it further – speak to the legacy of the hurricane.

It’s a well written, authoritative book. This classic text reminds me that good writing begins with, and is driven by, a good understanding of the material that a person seeks to write about.

Having recently been reading about the Humber River, I was interested to read what L.J. Chapman and D.F. Putnam, authors of The Physiography of Southern Ontario (1984), have written about the Niagara Escarpment and the Humber River.

I learned (p. 167) that the Humber River actually starts at the Niagara Escarpment. I found that of much interest – to realize that a close connection exists between the escarpment and the river. 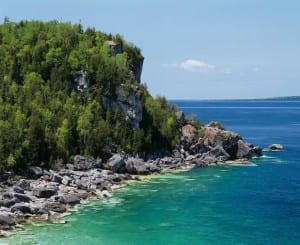 The link at the previous paragraph describes the geology of the escarpment:

Recently, I’ve also learned that Étienne Brûlé arrived at the mouth of the Humber River in 1615. This detail of history has prompted me to learn more about the river. 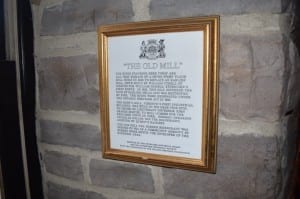 A topic that has intrigued me is the relationship between Old Mill Toronto and the first mill that was built in York in 1793.

I was pleased to learn that a framed text at Old Mill Toronto answers the question.

The text is laid out in capital letters, an arrangement that detracts from readability. In lowercase format, however, it’s easy enough to follow:

“The ruins standing here today are all that remain of a [seven-storey] flour mill built in 1848 to replace an earlier mill, both built by William Tyrell of Weston for William Gamble, Etobicoke’s first reeve. This mill suffered the fate of earlier mills and was destroyed by fire. The ruins were designated under the Ontario Heritage Act in 1983.

“The King’s Mill, Toronto’s first industrial building, was built on 1793 near this site, on order of Lieutenant Governor John Graves Simcoe, to mill lumber for the proposed Town of York. German-speaking Nicholas Miller was the millwright, assisted by Queen’s Rangers.

“The Old Mill Tea Garden Restaurant was opened in 1914 by Robert Home Smith, the developer of the Kingsway area.

Regarding the events of 60 years ago, Chapman and Putnam (1984) remark:

“The Humber was in the main path of Hurricane Hazel on October 14-15, 1954, when up to 8 inches of rain fell, most of it within 16 hours. The resulting flood caused extensive property damage and great loss of life. At Weston a row of houses built on a low terrace near the river was swept downstream, carrying some of their occupants to their deaths, an awful price to pay for having built upon land belonging to the river.” 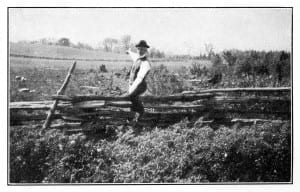 The caption from photo on p. 209 of Toronto During the French Regime, 1615-1793 (1933) reads: The Northern End. The Carrying Place descended the hill on the horizon before crossing the marsh. 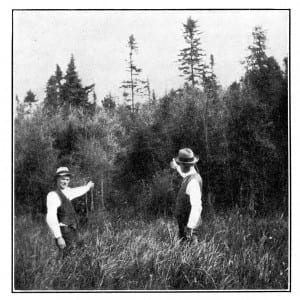 The caption from photo on p. 209 of Toronto During the French Regime, 1615-1793 (1933) reads: Crossing the March: Until recent years a trail ran through the woods to the west of the northern end of the sixth concession of King.