We owe many, many thanks to Henk Boshouwers, who has shared the following information (I checked with Henk first, to ensure it’s okay if I post it) about Harry Boshouwers.

You refer to the passing away of Harry Boshouwers MCHS’63. I have known his parents since 1960 since his father was a cousin of my father. Harry was killed in a taxi along with the driver in a collision with a train in front of his house in Saraguay. I do not remember the exact date but it must must have been a few years later as he was then a student a Sir George Willams University.

Harry Boshouwers’ parents had been living in the Dutch East Indies and had been detained in a Japanese internment camp after Pearl Harbor. 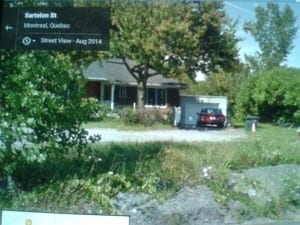 Bob Carswell has forwarded this photo, a Google Maps Street View. Bob comments: “Here is the location of Harry’s house today on Sarleton Street, in St. Laurent, surrounded by a lot of factories that grew up in the area over the past 50 years or so. No one, would ever realize that this was once the house at 27 Green Lane, just over the tracks. Built by hand….” Source: Bob Carswell sent the photo.

A daughter was born in the camp. I believe Harry was born shortly after liberation. The family lost everything. Via the Netherlands they settled in Canada.

Harry Sr. worked for Canadair en built his own house on Green Lane in Saraguay.

After high school Harry Jr. studied at George Williams University (now Concordia) in the evening. One night in the mid sixties, coming home via the train station in Cartierville by taxi, he was killed, when the car was hit by a train along with the driver on the unguarded crossing on Green Lane, a few hundred feet from his home. His death as their only son was as terrible blow to his parents. They moved to B.C. where they have since deceased.

At the MCHS 2015 website, we have a page devoted to students and staff Who Have passed away. You can access the page here:

We are compiling a list of music associated with MCHS Students or Alumni who have passed away. Harry Boshouwers loved the song “Spanish Harlem” released by Ben E. King in 1960s.

Harry wrote the blurbs describing each of the students in 11-B for the MCHS 1962-63 yearbook. I remember, because I recall speaking with him about what he had written, by way of a text, that went with my own yearbook photo. In each class, one student took on the task of writing the descriptions.

Comments by Bob Carswell regarding focus and discipline in the face of adve... Car photos from weekend Port Rowan, Ontario car show – with thanks to...
Scroll to top