Civil society – or to be more precise, the semblance of it – is a concept of great value in urban China. Discourses based upon gains in value attract wide audiences. Who can argue with the enhancement of value?

A basic theme of The Government Next Door (2015), a study by Luigi Tomba that I’ve written about in previous posts, is that in gated communities in China, middle-class residents are free to engage in a wide range of contestations, related to topics such as “consumer rights,” so long as specified conditions are met.

The conditions include keeping contestations – such as battles with developers or property management companies – within the confines of the gated community and within the bounds of the narrative arc of the wider state enterprise. Such contestations, Tomba concludes, serve to enhance the power of the Chinese state.

When I first began to read The Government Next Door (2015) I was struck with the structure of the text. A number of rationalities – by which the state has crafted the creation of a new middle class in China – are outlined early on, and from that point each chapter is devoted to one or another aspect of each of the rationalities. I have very seldom encountered a book of this nature. One book that does come to mind is Erving Goffman’s The Presentation of Self in Everyday Life (1959). Both book are based, as I understand, on what is called ethnographic fieldwork, which I like to think of as a form of structured, high-end reporting. 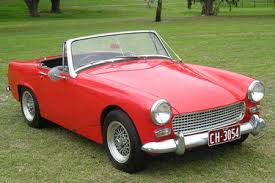 If I were to try to think of the structure of Tomba’s book in metaphorical terms, I would describe it as akin to driving an Austin Healey Sprite sports car on a winding mountain road in British Columbia in the late 1960s.

I’m sure that other metaphors would come to mind for people with more extensive life experiences but that is the metaphor that comes to mind for me. When I owned such a car many years ago, I thought of the driving of it as reminiscent of the workings of a finely crafted wristwatch. All of the parts worked together in a kind of intricate pattern – like clockwork, as the expression goes – and every part was there for a purpose.

With the car, the task was to contend with the laws of physics while a person embarks upon a controlled, high-speed skid around a curve in the road. With a wristwatch, the task was to keep within a second of two of the correct time, over scores and scores of hours of operation.

It may be added that what I refer to concerns my concept of an exemplar. By way of a metaphor, I could as easily refer to anything is that is put together well, and that works beautifully.

Facts on the ground

Both Goffman and Tomba deal with the facts on the ground, or in the air, or the facts as they are presented within a presentation-of-self or public-relations context. They are dealing with three key things.

First, they are dealing with evidence that is available to a perceptive observer.

Secondly, they are dealing with conceptual frameworks that serve to ensure that the evidence, whatever it may be, is accepted for what it is.

Thirdly, they are dealing with conceptual frameworks that serve to ensure that non-evidence is accepted as something other than what it is. To state the matter directly, both Goffman and Tomba are adept at elucidating the delightful, consensual processes by which we as human beings are pleased to say, or quietly and tacitly acknowledge, that “Non-Evidence = Evidence.”

The history of public relations in the United States of America covers the ground well, with regard to the “Evidence is Non-Evidence” (or, if you wish, “Non-Evidence is Evidence”) equation.

In a previous post, I’ve provided a link to an NPR interview with Evan Osnos, author of Age of Ambition (2015). The interview includes a reference – highly apt, in my view – to what the Chinese state has learned about Western approaches to public relations.

Effectiveness in large-scale, high-level, high-stakes public relations, from what I can gather, is a hallmark of the neoliberal project. Tomba’s research tends to focus, by way of valuable ethnographic observations, on what occurs inside of them. The wider context is also of interest, of course, for which reason the links at a previous post may be of interest to you; the previous post I refer to is:

Inside gated communities facts are nuisances

I’ve also referred to Fortress America (1997) by Edward Blakely and Mary Gail Snyder; you can find references to the book in previous blog posts. I’ve been reading many books about gated communities in countries around the world including by way of example in the United States, Canada, Bulgaria, and Brazil. Many of them are of interest. At this point, aside from Tomba’s book, and a few others I’ve looked at briefly, Fortress America (1997) very strongly took hold of my attention as soon as I began to read the opening sentence of the first chapter. The sentence reads: “‘The setting of boundaries is always a political act.”

Now, the latter book was published close to two decades ago. Much has evolved in the field of gated communities in that time and yet the 1997 text remains a great place to start. Specified trends are described in the book, that were at an early stage of development, and that have taken hold more firmly since 1997.

What strikes me, from the Fortress America study, is the observation that, from a marketing point of view, what you are selling with any development, in a market economy, is an emotion. Words and imagery are used to create an emotion.

That is my initial thought. Further reading and study may lead me to refine or revise my view.

Fortress America expresses concern that the virtues of the wider civil society are eroded when people retreat behind walls and fences within the confines of gated communities – where residents feel safe, secure, and in the presence of their own kind of people. I would add in passing that there’s a distinction between feeling safe and secure, on the one hand, and actually being in that benign state of being, on the other.

If I understand things correctly, The Government Next Door expresses concern about no topic; instead, the study simply notes that civil society, as it is known in Western countries, does not exist in China.

The topic closer to home

Most recently, I’ve been helping out, in a minor role, in discussions related to the launch of a neighbourhood association in the community where I live. I do not live in a gated community but I’m acutely aware of the role that boundaries play in the defining of associations of this nature – both street boundaries and also demographic boundaries (for example, “Do we let renters join the association?”). That is, who draws up the rules regarding membership?

Luigi Tomba speaks at length about the ways in which neoliberalism lacks explanatory power with regard to the creation, by the Chinese state, of a new, property-owning middle class in China. With regard to community self-organizing in the Toronto community that I live in, a question that interests me concerns the role that neoliberalism plays in setting the boundaries for human agency, when planning decisions are assessed from the perspective of local citizens.

A text that reminds a reader, in a vivid way, of topics that are otherwise treated in a manner that is academic and abstract, is featured in a Jan. 22, 2015 Guardian article entitled: “I want you to understand the sense of fear that Chinese people feel every day.”

Also of interest: One Child: The Story of China’s Most Radical Experiment (2016).

A June 2016 Atlantic article is entitled: The Destructive Legacy of Housing Segregation: Less visible than the rise of income inequality in America is its impact in shaping the country’s urban neighborhoods. Two books – by Matthew Desmond and Mitchell Duneier – could help change that.”

A June 2016 Atlantic article is entitled: “China’s Twilight Years: The country’s population is aging and shrinking. That means big consequences for its economy – and America’s global standing.”

A Nov. 12, 2016 Globe and Mail article by Doug Saunders, entitled “Whitewashed,” features an American interview subject  who lives in a gated community: “Although her neighbourhood, which is gated and predominantly white, does not see much crime, her family had armed up, accumulating more firearms to protect itself.”

An April 20, 2017 Institute for New Economic Thinking article is entitled: “America is Regressing into a Developing Nation for Most People: A new book by economist Peter Temin finds that the U.S. is no longer one country, but dividing into two separate economic and political worlds.”