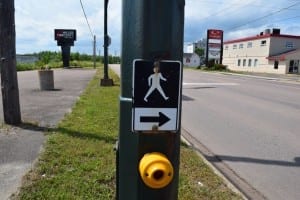 Street scene in Moncton where I met with Graeme Decarie at a Tim Hortons in August 2016 while driving from Ontario to and from Prince Edward Island. When I first met with Graeme, in a phone call he directed my attention to a local landmark, the Econolodge Motel in the background of the photo. Jaan Pill photo

A May 13, 2020 Guardian article is entitled: “Why are so many people getting sick and dying in Montreal from Covid-19? The city is at the center of the crisis in Canada and Quebec is now the seventh deadliest place in the world for daily deaths.”

I note from this article and others I’ve read that Montreal North and the adjacent areas have been particularly hard-hit by the COVID-19 pandemic. An excerpt from the Guardian article reads:

The other part of Montreal’s Covid-19 story can be summed up by the death of Marcelin François. The 40-year-old Haitian asylum seeker who died in his wife’s arms inside their Montreal apartment in mid-April.

During the week, François worked in a textile factory. On Saturdays and Sundays, he worked as an orderly inside whichever CHSLD his temp agency dispatched him to that week.

He lived with his family in Montreal North, one of the poorest neighbourhoods in all of Canada. It is a popular destination for asylum seekers – many of whom crossed the US–Canada border on foot shortly after American president Donald Trump took office. Half of the neighbourhood’s residents are members of a visible minority, and 42% are immigrants.>/p>

The article underlines for me how much the history of all cities is closely connected to history around the world, at so many levels. I speak as a person who grew up in Montreal and whose parents were refugees from Estonia during the Second World War. In the early 1950s we lived at an apartment in or near the Snowdon district of Montreal after which we moved to a newly-built house on Lavigne St. in Cartierville.

The following email conversation, edited for brevity, took place early in September 2016 in connection with a 1993 NFB documentary that is highlighted at a previous post:

A recent update to a Jan. 1, 2013 post is also of of relevance; it concerns the relationship between buildings and that occurs inside and outside of them:

Graeme Decarie (Sept. 2, 2016): I’m in Montreal for a funeral for my brother in law, and to see my sister (his widow). I’m really quite lost with the changes in Montreal. Traffic has become quite dreadful. And so many anglos have left, I know almost nobody here. There are some magnificent mafia palaces on Gouin along the waterfront.

I’m staying at my sister’s place, a condo about a couple of hundred metres from MCHS just on the other side of the commuter railway. The constant volume of traffic by the school is phenomenal. The train station now has monster parking lot. O’Brien has heavy traffic and there are several, new expressways.

Jaan Pill (Sept. 3, 2016): Can you tell me more about the “mafia palaces” topic? That is: “There are some magnificent mafia palaces on Gouin along the waterfront.” Are these new houses or have they been there for a long time? 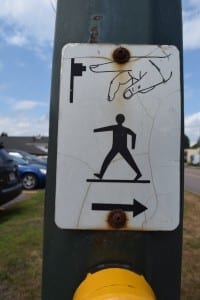 Another sign in Moncton. Each province and era has a different approach to communicating the same messages – in this case, the story is that if you press the button, you will increase your chances of making it to the other side without getting hit by a car. Jaan Pill photo

I assume this is a colloquial term referring to houses that are assumed to be related to Mafia figures.

Graeme (Sept. 3, 2016): They are huge and ornate houses on large properties on the water. Everybody says they are mafia. I don’t know that for sure. They must be 5 or 6 thousand square feet. I knew some high-flying mafia types. And there’s just a touch of coarseness in these palaces that they would like.

These were some 3 or 4 k west of sacre coeurs hospital.

I haven’t seen much of an Oriental population.

1) I did a search for “mafia houses Gouin Blvd.” and learned a bit about the Gouin Blvd. courthouse and related topics: 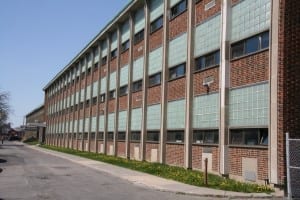 May 2015 photo of the building where Malcolm Campbell High School was located. Scott Munro photo

A June 18, 2016 Montreal Gazette article is entitled: “Wedding reception was a who’s who of Montreal gangsters.”

2) I’ve long been interested in the general story about the connection between corruption and Montreal:

3) Reminds me of a wider topic namely the role of gangs in public life:

Starting in the 1920s, gangster movies underlined the capabilities of talking pictures

Graeme (Sept. 3, 2016):  I’m finding montreal a very alien place. The mix of people is much different. But more jarring was the disappearance of so many stores and restaurants I had known. Even Concordia felt strange to me.

The language tension really wasn’t noticeable, though. And both of my sons just love the place. 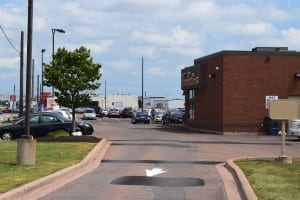 Graeme Decarie arrives at Tim Hortons coffee shop for meeting with Jaan Pill. The former teacher and student had not seen each other for 53 years. Jaan Pill photo. Click on the image to enlarge it; click again to enlarge it further.

What is strangest is that I’m staying at my sister’s’ – in sight of MCHS. But the whole region seems alien. And I guess that’s partly because I don’t know a soul in the area. Even the YMCA has disappeared – and all the shops at Norgate are new.

And so we are left behind in the dust of a world galloping ahead in chariots.

Graeme (Sept. 8, 2016): I’ve been in Montreal for over a week, now. And it’s been rather sad. I’m staying just the other side of the railway tracks from MCHS. I lived in this area for ten years. The streets look the same. In fact, the houses look even better than new.

But it’s depressing to walk around. The whole community I knew, and its institutions, are gone. I feel decidedly alien here. I know nobody. And nobody knows me.

Much as I find Moncton an intellectual morgue, I’ll be happy to get home tomorrow. 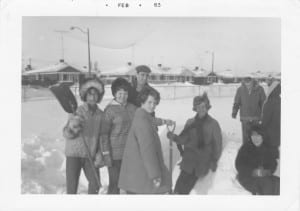 Oh, there is one change. Montreal is a hell of a lot more spread out. And the traffic is very, very heavy.

The Gazette has deteriorated to the point where it make the Moncton Times and Transcript look (almost) good. It’s obviously run as cheaply as possible. In fact, at first glance it looks like a supermarket freebie.

Jaan (Sept. 8, 2016): My post about The Rise and Fall of English Montreal (1993) is going to be longer than I anticipated. I at first envisioned a link to the video and a brief blurb about the film.

As it has turned out, I’m going through the film second by second, transcribing parts of it, and taking screenshots from it to add images to the post. I was interested to see that some of the things you had talked about in emails long ago, such as the invention of hockey by Anglophone Montrealers, were included in the film.

I’ve also begun to think about the wider context of how media works, how stories are created, and how impressions are fostered, and I’ve begun to acquaint myself with some of the written resources available at the Toronto Public Library about Quebec in the 1990s and beyond. 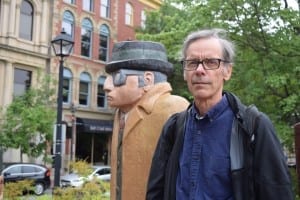 In August 2016 I spent some time in Prince Edward Island, a beautiful setting for a vacation. On our drive to the island, we stopped in Moncton, New Brunswick as well as in Saint John, where this photo was taken.

My own connection with the NFB includes a summer job in early 1970s Vancouver where I worked as an assistant director for a film in Victoria about foster kids, and writing about NFB and independent producers when I was a freelance writer with Cinema Canada (1975-1980).

In the early 1970s I spent a morning visiting the NFB head office in Montreal. That was an intriguing little empire, that I encountered. I also did consulting for an NFB film that was made more recently; the resulting film wasn’t very useful from my perspective, but I learned something about how NFB films are put together.

The NFB’s origin as a propaganda outfit during the Second World War has long been a source of fascination for me. 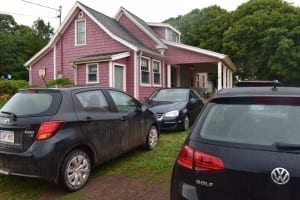 Prince Edward Island is a great place to meet with family and friends any time of year. Jaan Pill photo

I’ve been interested to note that the CBC has done a good job l in connecting with audiences. My sense is that the origins of CBC involved engagement with somewhat different currents of Canadian history, as contrasted to the origins of the NFB.

Graeme (Sept. 9, 2016): I also worked on a few other films which I’m going try to find when I get back to Moncton (tomorrow). They were all NFB.

As to Montreal, it’s much more friendly than it used to be. And the language tensions aren’t to evident as they were. The old Black population seems to have been smothered by Haitians and Africans – and it’s very, very widely spread throughout the city. Housing prices are high. The house in St.Laurent that my parents bought about 1956 for $25,000 is now on sale for $580,000.

If I do move back to Montreal next year, I’ll have to avoid all those expensive districts like St. Laurent, Cartierville. The prices are insane.

Click here to access a Trailer for All Governments Lie (2016) (opening at TIFF)... Chapter 3: The War
Scroll to top