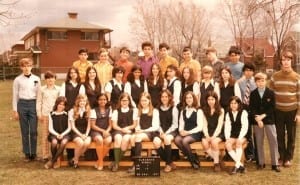 “Discovered my Grade 7 pic from Elmgrove French Immersion. 1970-71. A good chunk of these students ended up in MCHS.” – Spiro Couris Athina Maroudas. Click on the image to enlarge it.

Spiro Couris Athina Maroudas has posted this great photo at the Malcolm Campbell High School Grads Facebook page. He has given permission for me to post it at the Preserved Stories website.

He writes on Facebook: “Discovered my Grade 7 pic from Elmgrove French Immersion. 1970-71. A good chunk of these students ended up in MCHS.”

I’ve also been reading about how the Protestant School Board of Greater Montreal made a point of introducing French Immersion as a strategic move to ensure that the English-language system would be able to address, as best it could, the changes occurring in Quebec following the Quiet Revolution in the 1960s.

The postwar years are a fascinating period in Quebec and Canadian history, which I have also discussed recently in the context of a 1993 film entitled “The Rise and Fall of English Montreal.” Again, if you are interested, you can do a search at this website.

I also like to relate this history to the present moment, the most important time of all, the filter or frame through which the past, and all of life’s experiences, are viewed. Each generation as it emerges, as historians have commented from time to time, looks toward the past from its own particular vantage point.

I’m a strong supporter of French Immersion. There is so much value, as the research about brain development indicates, for children to be learning two or even more languages. I’m pleased to know there is strong interest in French Immersion across Canada. In my experience, the quality of education offered in the French Immersion stream (in both francophone and anglophone instruction) at the Toronto District School Board, by way of example, is from my anecdotal observations of very high and impressive quality.