This is the first photo, that Klaas has emailed, to accompany his comment. Photo source: Klaas Vander Baaren. Click on photo to enlarge it; click again to enlarge it further.

A recent previous post is entitled: A message from Sheila Dai, reaching out to friends of her brother Jenning Dai.

The current post is concerned with a comment from Klaas Vander Baaren concerning a previous post entitled: Bob Carswell adds a comment about the caddy shack at the Marlborough golf club. Eric Karbin comments also.

I’m writing the current post, in order to bring attention to the comment from Klaas, which reads: 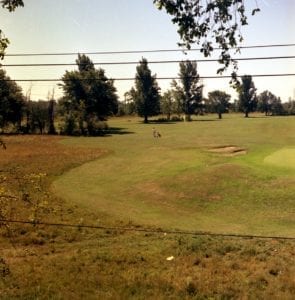 This photo, notes Klaas, “shows a caddy playing early. Caddies were allowed to play the women’s course at times. Walking from ladies 5th green to ladies 6th tee. The left side of the 6th fairway are the train tracks.” Photo source: Klaas Vander Baaren. Click on photo to enlarge it; click again to enlarge it further.

I just read the posts by Gary and Eric and boy, did it trigger some memories:

– The hole parallel to the tracks the Ski-Doo’s used was the Ladies 6th. Yes, there was a ladies course, 9 holes. Women were not allowed on the regular course before 1:00 most days in the 50’s and early 60’s. I’ll send the picture from our backyard of the 5th green and fairway to Jaan to post with this comment. I think on the other side of the popular trees (right of picture) was the men’s 6th? It’s been a while.

– I was talking about the Cessna crash the other day. I remember running through the field towards the crash on the tracks. There was a cop running behind me who didn’t see the low wire fence I jumped over and he broke his leg tripping over it. The plane was lying on the tracks and we all knew the commuter train from Roxboro was due into the Val Royal station in a couple of minutes so I had to run West along the tracks to flag it. The train stopped. As soon as the plane was dragged off the tracks, the train passed by very slowly. I believe the pilot survived but I remember his skull was open.

– We played a lot of pickup hockey on the rink at Somerset & Cousineau. Had a shack to put on our skates. Bob Wade and many others played there.

– The Dairy Queen on Laurentian was the BEST!!!

Wonderful to know, Klaas, how the previous comments from Gary and Eric has given rise to such great memories! I’m pleased you were able to get the plane off the tracks! The photos add so much of value to the scenes that you have described.

I am reminded, among other things, about reminiscences from a caddy at a golf course in Mississauga, close to where I live now. The reminiscences, which are at the very end of a post entitled A History of Long Branch, date from about the same time as your caddying experiences at the Marlborough golf club, where over the years I think I earned about $25, which I should have invested, but instead frittered away – probably on treats and comic books. The $25 would be worth about $210 today, assuming we compare 1960 to 2017 using the Bank of Canada Inflation Calculator.