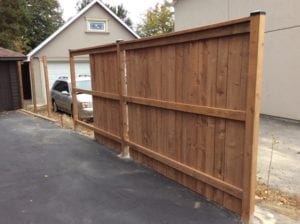 From time to time I receive messages from residents across Ontario highlighting issues affecting their neighbourhoods.

The purpose of the current post is to summarize a story regarding a fence built upon a registered right of way.

Site visitors may able to offer advice regarding how best to address the situation, that has been described for me, in a recent email message.

In most cases, in my experience, neighbours see mutual benefit of cooperating – that is, being friendly and neighbourly – in the use of shared driveways, in cases where such driveways are in place. The case that I am describing is an exception.

The story, as I understand it, and stated concisely, is that “a fence has been on a right of way, on a driveway that has been the same as 1962. The right of way was registered in 1962 and allows a car to access a garage.”

The story begins in 1955, when a house was purchased on Lot 487 which later became known as Benprice Court in Scarborough.

By 1962, the family living at the house had grown to eight people – a couple with six children. “We needed more room,” the email message notes. “In order to add on to our house, we needed a right of way so that we would have access to our garage.”

The family received a building permit for an addition as well as a right of way from the next-door neighbours.

“Everything we did was done through a lawyer and inspected and was registered, all according to law.”

By 2014, a new owner (who had purchased the property in 2011) at the adjacent house built a two-foot ditch down a strip of land dividing the properties.

“I tried remonstrating with him that the ditch would erode my driveway as nature would fill it in.”

The homeowner called her councillor, who at that time was Glenn De Baeremaeker, and an inspector was sent out who instructed the neighbour that he would have to build a retaining wall.

Nothing was done, however, after which the homeowner called the councillor again, who sent out sent another inspector, who this time told the neighbour that he did not have to build a retaining wall, given that the driveway had eroded, and had filled in the ditch.

In 2017, the message notes, the neighbour next door removed a section of the homeowner’s fence behind her garage and put up a new one 35-inches onto the homeowner’s property.

The neighbour, according to the email message, “dug up all of my plants on the south side of my garage … under the eaves of my garage and proceeded to attach a fence to my garage.”

The homeowner, whose land had been encroached upon, reports that she had the original survey as well as the registered right of way.

The homeowner was advised by a lawyer to get a new survey, which turned out to be identical to the original one. The lawyer also sent a letter to the next-door neighbour advising him that he needed to remove the fence and rebuild it on his own property.

The neighbour “did nothing about it so, since the fence was on my property I had it removed and rebuilt on the boundary line.”

“Now I have spent $2500.00 for a new survey (one side of property only) and legal fees plus the expense of the fence.”

On Oct. 11, 2018, the email message continues, the neighbour “dug fence post holes in my driveway.”

The homeowner, who wrote the email, had done to the Civic Centre, anticipating that the neighbour would take this step, and was told that until the neighbour actually started to build, there was nothing the homeowner could do, but that as soon as he did start to build a fence she should call 311 and have an inspector come out to the property.

“While waiting for inspector to come,” the message continues, the homeowner phoned Toronto Police Service (416-808-2222) and requested a police officer to have the neighbour stop his work until the inspector arrived.

The officer, in turn, asked the neighbour to wait until inspector had arrived. “The officer was not even off the street,” however, before the neighbour started pouring cement into the fence post holes.

The inspector came and said there was nothing to be done, as it was “a civil matter”.

The homeowner went to another lawyer, who sent a letter to the neighbour informing him that he could not put up a fence on a right of way. This involved an additional legal fee.

The homeowner adds that everything that she has done has been according to the law, yet she is “the one who has to keep paying.”

The neighbour, the message notes, “can do as he pleases and I pay.”

The homeowner notes that the driveway has been the same for 56 years, including the years when three previous owners lived at the neighbouring house, as well as the last five years when the latest neighbour has lived next door.

The only purpose of the eight-foot fence, the homeowner adds, “is too deny me access to my garage.”

The homeowner has sought help from many officials and two lawyers but the neighbour appears in a position to “do as he pleases” while the homeowner, in order to address the situation, is required to spend money on legal fees.

Right of way and easement legislation in Ontario

Nazism and Stalinism: What if anything did they have in common? Two Toronto city councillors were charged Friday, Nov. 16, 2018 by the Ontario...
Scroll to top