I’m getting to know Stratford, where we have lived since October 2018. 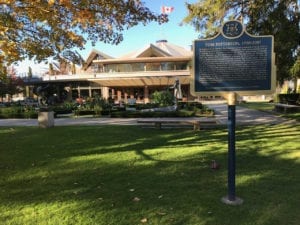 I have learned, for example, about a general strike in Stratford in 1933.

I first learned about the strike when I read a plaque, by the Avon River in Stratford, which features a photo of a man bleeding from a head wound.

A History and Heritage page at the visitstratford.ca website features details about the strike. At the latter link, I also read that “The Canada Company had been formed in 1824, when the government of Upper Canada was granted a million acres of land to settle.”

We can add that in the event we seek to arrive at a full accounting of the past, Ontario history encompasses not just settler history, but features Indigenous history as well.

The above-noted link identifies Tom Patterson as a reporter for Macleans’s, which may not be an accurate statement. In fact, he worked in Toronto for a trade magazine, Maclean-Hunter’s Civic Administration.

I mention this because I’m keen about evidence-based practice with regard to local history; fact-checked is often required.

Information about Stratford is available at the Encyclopedia Britannica website, which identifies itself as a “fact-checked online encyclopedia … with hundreds of thousands of objective articles, biographies, videos, and images.” An entry about Stratford, Ontario at the latter site notes that:

“The city is best known as the site of the Stratford Festival, held each summer since 1953; the festival’s theatrical performances, particularly of plays by Shakespeare, were originally directed by Sir Tyrone Guthrie and are held in the Festival Theatre (built 1957), the Avon Theatre (acquired 1964), and Third Stage (established 1971). Lake Victoria, the centre of Stratford’s park system, was created in the early 20th century by damming the Avon for one of the city’s numerous mills (for lumber, grain, and woolens). Railway repair shops, engineering industries, and light manufacturing combine with the arts and tourism to form the city’s economic base. Inc. village, 1853; town, 1858; city, 1885. Pop. (2006) 30,461; (2011) 30,886.”

The above-noted entry includes a link to Stratford’s Lake Victoria. However, the link link, refers to “Lake Victoria, also called Victoria Nyanza, largest lake in Africa and chief reservoir of the Nile, lying mainly in Tanzania and Uganda but bordering on Kenya.”

As well, the railway repair shops (at what is now called the Cooper Site or similar name) closed down in 1958, or thereabouts, according to sources that I have read.

In my reading, I’ve come across some terms that are relatively new for me, including entertainment tourism and heritage tourism.

Musicals at the Stratford Festival

I’ve also came across an impressive online doctoral dissertation, at the York University website, by Lauren Acton. The December 2014 dissertation is entitled:

Musicals at the Stratford Festival of Canada: the economics, aesthetics and entertainment value of musicals produced at a classical theatre festival

The purpose of the current post is to bring attention to the dissertation, which I’m currently reading – very slowly, stopping often to reflect upon what I read – and which is highly informative and interesting.

As is my standard practice when reading online dissertations, (in some cases) journal articles, and similar documents, I’ve converted the thesis from PDF to Microsoft Word, and have proceeded with breaking the standard long-text paragraphs into shorter paragraphs, which I find easier to read.

I like to read short paragraphs. If necessary, I’ll read longer ones as well, but my preference is for shorter paragraphs. I find it easier to follow the story, and the argument, when it’s presented in short chunks of information.

I’m also used to writing short paragraphs as a reporter and feature writer. Why academic texts feature very long paragraphs, while paragraphs in news reports tend to be short, is a question that intrigues me.

One of the differences is that readers of news reports need to be persuaded to read a report. In academic writing, by contrast, the people who read the text don’t have as much of a choice. Slogging one’s way through a long text is a job requirement.

The opening paragraphs of the abstract (p. ii) for the dissertation read:

This dissertation explores the place of musicals at the Stratford Festival of Canada – with specific attention focused on the function, and the value of an American art form in a classical theatre company devoted to the works of Shakespeare. I trace the history of music theatre at the Festival, including opera and operetta, and argue that the Festival’s commitment to music in its early history led to the organic inclusion of musicals in its seasons. I also give a more nuanced reading of the place of musicals at the Stratford Festival in analyzing the physical places where they are produced, and how they are valued within the company.

Theatre critics commonly view musicals as money makers for the Festival to finance its real goal of producing Shakespeare and the classics. The economic value of musicals is undoubtedly important, and I examine it in detail, but it is only one facet of their purpose at Stratford. I problematize the role of musicals at Stratford, arguing that reducing the value of musicals to economic value alone is rooted in a historical construction of highbrow/lowbrow taste hierarchies that align musicals to bourgeois aesthetics and commercial theatre. I unpack the history of the way musicals have been trivialized as middlebrow entertainment within theatre communities and academia. I contend that their role cannot be fully understood by examining their economic value alone, but must be understood by analyzing their aesthetic value and entertainment value.

An excerpt (p. 298, to which I’ve added a link) from an appendix highlighting the history of the Stratford Festival reads:

In many ways, the idea of a company of Canadians being aided by British notables until they could stand on their own was an ideal of what I term next generation colonialism. Theatre scholar Richard Paul Knowles called the spirit in which the Stratford Festival was founded, “the solidification of a delayed colonial celebration of a 19th-century brand of Canadian nationalism configured on a British model.” [630] It is this type of nationalism that aimed to create an elite high culture in Canada modeled on the British elite and choosing the Bard as mascot. It was the type of cultural imperialism we so often talk about in regard to the United States, but instead of taking on the cultural influences of Canada’s neighbour to the south, the Stratford Festival was founded in a spirit of willing acceptance of British cultural empire. However, the intention at Stratford was that Canadians would eventually be able to take over the Festival.

Richard Paul Knowles, “From nationalist to multinational: The Stratford Festival, free trade, and the discourses of intercultural tourism” Theatre Journal 47, no. 1 (March 1995): 20.

Another dissertation that I’m reading is highlighted at a previous post:

Doctoral thesis by Maarja Merivoo-Parro highlights fostering of patriotism in... TLAB decision regarding 11 Stanley Ave. in Mimico: Severance and variances...
Scroll to top