I am working, at my leisure, on a history of Long Branch. An early draft of my project can be accessed at a previous post, entitled: 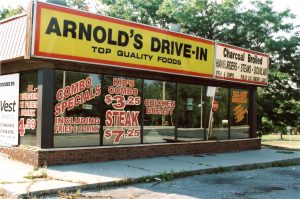 The enthusiasm of site visitors, in response to the above-noted post, underlines for me that there is interest in the history of Long Branch.

The 1949 aerial view of Long Branch, at the right, has been seen by many site visitors.

There’s a gas station at the bottom of the photo.

The gas station was at the corner of Forty First St. and Lake Shore Blvd. West, where Aquaview Condominiums is now located.

Some years ago, I directed a short video depicting the building of Aquaview. Many people have seen the video, which you can access on Vimeo at: In this May 2007 photo, the former Coffee Time shop (which previously had been a gas station and garage) is in the process of being converted into a sales office for a condo project. Jaan Pill photo

With help from a first-rate film editor, Steven Toepell, I made the video as a digital portfolio for the Site Superintendent at Aquaview Condominiums.

When the Aquaview project got underway, I had recently retired as an elementary school teacher. Enjoying my free time, every day I would take my dog for a walk around the periphery of the work site, which extended along Lake Shore Blvd. West, between Forty First and Forty Second Streets in Long Branch. Each day as I walked, I would take photos with a digital camera, keeping track of progress at the site, from one day to the next.

After a week or so of my picture taking, suddenly Andy Iadinardi, the Site Superintendent, very politely stopped me in my tracks, and inquired, “So, what are you doing?”

I said, “I’m taking pictures of the work that’s underway, and when it’s all completed, I’ll tell the entire story, in a short film.”

He looked at me, for just a moment.

Then he said (and I paraphrase), “Okay. That’s a great idea. You can proceed.”

In time, people more or less got used to me documenting the construction, one day after the next. I got to know some of the staff, and had some great conversations with them. I learned a lot about construction procedures.

In my younger years, before I fell into the teaching business, I had worked from time to time in construction, meaning I could relate to the work – although my abilities as a construction labourer had been quite minimal.

I had learned enough, however, to have tremendous respect for people in that industry – both the men and the women who work hard, day in and day out, in this field.

Another photo shows Arnold’s Restaurant at the corner of Forty Second St. and Lake Shore Blvd. West. The restaurant was a fixture in the neighbourhood for many years.

I’m pleased to say that I’ve recorded many interviews, that I will post in future, in which old-time residents (now often living far from Long Branch) have related lots of exciting tales about the happenings at the buildings that used to be in place, where Aquaview Condominiums now stands. My Long Branch history project will include a book chapter and film segment devoted to land-use planning topics in Long Branch and nearby communities in Toronto and Mississauga. In my role as a participant/observer, I was involved in the early stages of planning for the launch of the Long Branch Neighbourhood Association. For several decades, until I turned to local history, I have been intensively involved, as a volunteer, in community self-organizing projects, locally in Toronto, nationally in Canada, and also at the international level. Based on that experience, I know (at an anecdotal level) that, in order to launch an association of any kind, it’s a great idea to spend plenty of time preparing for the launch. That is time well spent.

I’ve also learned that the more input you have, especially during the planning phase, the greater the chances that the long-term success of the organization will be ensured. An earlier association had been in place, in southern Long Branch, before the launch of the LBNA. The former association, however, focused exclusively on the issue of lot severances in Long Branch.

The long Branch Neighbourhood Association, in contrast, has made a point of focusing on a large number of other community interests, aside from the issue of lot splitting / overbuilding – a phenomenon that is of interest to many people, and is, indeed, a key concern of this historic community.