58 Wheatfield Road in Mimico – intention to designate under Ontario Heritage Act – goes to March 19, 2019 community council meeting; new letters (if you have not yet written) will be most helpful 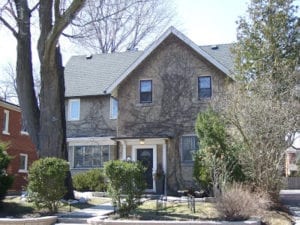 As the post notes, letters should be addressed to “Chair and Members of Etobicoke York Community Council” and can be sent by email to etcc@toronto.ca

Please take a moment to send a letter of support to designate this previously “listed” (since 1998) building under the Ontario Heritage Act, if you have not yet written such a letter.

Please encourage people, in your circle of contacts, to write such a letter if they have not yet done so.

Bill Zufelt of Toronto has written the following text (to which I’ve added a link, for further reading):

Dear Chair and Members of the Etobicoke York Community Council

Sometimes we are all guilty of ‘not seeing the forest for the trees’.

For the purposes of recommendation for 58 Wheatfield Road Heritage sustaining designation, I am introducing the close proximity of the Sir Henry Pellatt and Fredrick B. Featherstonhaugh estate residences into the conversation .

On the Heritage Toronto web site and in tandem with Celebrate Toronto 185 is the prominent posting “Do you own a Century Home?”

This morning I visited the listed Heritage Destination site of 58 Wheatfield Road. It is a Period Revival style with Arts and Crafts features attributed to the celebrated architect Alfred Baker. The HPS residence is located in the century setting of historic Mimico Village .

58 Wheatfield Rd.is within a quick south west walk to Royal York and Lakeshore Blvd the former site of Featherstonhaugh Estates, the Tower sometimes called the ‘castle.’

Featherstonhaugh was a prominent patent attorney and owned the ‘first electric car’ in Toronto. In 1993 the Royal Canadian Mint issued a $100 gold coin to mark the centennial of this electric car.

And just 5 streets east is Lakeshore Blvd and Fleeceline, the site of ‘Bailey House’ built by Sir Henry Pellatt where he and Lady Pellatt moved to after unfortunately losing Casa Loma to tax default.

Ladies and Gentlemen, the Toronto narrative for heritage destination, commemoration and preservation has dramatically changed over the last decade.

In Great Britain, Europe, the United States and worldwide are leading and celebrating the momentum in the positive preservation with green retrofits and/or repurpose of century or older structures.

58 Wheatfield Road is a well cared for, sound residential home most suitable for an exemplary model proactive Heritage project.

As a formidable Canadian committee you have the opportunity and responsible choice of many positive stewardship options including sustaining its Heritage status of 2008.

Demolishing for paradigmatic ‘me-ism’ instead of ‘we-ism’ is not one of them.

In Dark Age Ahead (2004), Jane Jacobs outlines, with a sense of despair, as... David Godley of Long Branch has also sent a letter (succinct and with a great...
Scroll to top