I’ve become interested in learning more about this story. For that reason, I decided to revisit a November 2011 Toronto Life article that I had read years ago. I was wondering if the trailer park vaguely described, in the article, as “near Lake Ontario,” was in fact the Pleasant Valley Mobile Home Park:

“When Hurricane Hazel destroyed a trailer park near Lake Ontario in 1954, the displaced community moved onto the Palletts’ land. Roads were installed, and the collection of haphazard trailers became a permanent neighbourhood.”

By way of following up on this story, I’ve found a relevant web page. Although you can find the link via online search, I have not provided a link for the page given that it is an old one, and is Not Secure. (Quite a few sites are Not Secure these days; if I understand correctly, an https, as contrasted to an http, website appears to be a requirement for site security these days.)

A text at the page, which notes that “several” Pleasant Valley residents (as contrasted to “the displaced community,” mentioned in the Toronto Life article) moved to Twin Pines after Hurricane Hazel, reads:

Twin Pines was originally comprised of apple orchards and owned by the Pallet family. In 1948, during the reconstruction of Dundas Street, Mr. Pallet permitted the construction crews to park their travel trailers on his property and the apple orchards gradually gave way to mobile homes and travel trailers. The community then became known as Cedar Grove Mobile Home Park Limited.

In 1954 Hurricane Hazel hit, devastated the Humber River area and a mobile home park known as Pleasant Valley Trailer Park was destroyed. Mr. Pallett offered a place for the homeless to settle and several of these residents moved into Cedar Grove. 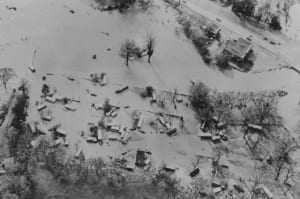 The front of the Park housed the Pallet’s residence, the sales lot for new mobile homes, a small store, a garage for Park maintenance equipment and a laundry facility for the residents. There was also an area set aside for travel trailers.

In 1992 Fred and Jean Pallet informed the community the property was going to be sold to a developer. Protests were launched and all avenues of financing were investigated by the residents in an attempt to purchase the land. The final result was that the community raised $1,000,000 and loaned it to Peel Living, who purchased the property in 1996 and renamed it Twin Pines Mobile Home Park. A lease agreement to the year 2016 was entered into and the residents became a non profit corporation known as The Cedar Grove Residents’ Community Corporation.

When the Pallets sold Cedar Grove, parts of the land were sectioned off, so as of today we are 23 acres and 218 homes. Travel trailers are no longer permitted in the Park and the permanent structures at the front of the property were eventually torn down to make way for the erection of the Summerville Pines seniors’ building.

I am pleased to share the following April 25, 2019 email comment from Laurent Burkhardt (as is my standard practice, I have obtained her prior permission, before sharing her message):

This [with reference to above-noted articles and website entry] seems to be referencing the park, although the timeframe mentioned leads me to believe that it is not applicable to the eviction, but rather to those who were displaced after the Etobicoke Creek was flooded.

Mr. Pallett is a familiar name and I believe – but must double check – was one of the individuals who later approached the city of Mississauga about relocating the community as a whole during the eviction process.

This is a very interesting piece of information, and Pallett may be a good local figure to develop a bit of a profile on considering his involvement.

As a person with an interest in local history, I found it of much interest to read Lauren Burkhardt’s recent comment. Going by the above-noted Toronto Life article, and the above-noted website entry, I had only a vague picture, in my mind, about chronological details related to the Pleasant Valley Mobile Home Park.

Without a full set of facts, a person is inclined to engage in speculation, in order to create a coherent narrative, even with limited facts. It’s been my anecdotal experience that such speculation happens quite a bit, with regard to history (local and otherwise) and with regard, indeed, to other aspects of life.

My own inclination, based on tings I’ve learned as a writer over the years, is to track down the facts and steer clear of speculation. For that reason, I am most interested in Laurel Burkhardt’s careful and conscientious archival research. Such research is highly valuable and warrants celebration.

A Jan. 17, 2021 Post and Courier article is entitled: “Mobile home park in Mount Pleasant area to be redeveloped. Tenants struggle to relocate.” The Post and Courier is a newspaper in South Carolina; an excerpt from the article reads:

What may be the last mobile home park in the Mount Pleasant area is about to close, clearing the way for a new subdivision, and some remaining tenants are struggling with the financial peril that comes with owning a home on rented land.

The family-owned Watts Mobile Home Park has existed for about 40 years along Six Mile Road, predating the town’s northward expansion.

Now it’s surrounded by new subdivisions, and its dirt road where manufactured homes sit beneath live oak and pecan trees will soon become a memory.