Why do so many Europeans desert their beautiful springtime to travel up an inhospitable coastline to the polar Arctic? The Germans, British and French get on a cargo boat to sail often choppy seas, 400 people at a time, nearly every day in March. They sail to the North Cape, Norway, the furthest point north on the European mainland. Although the North Cape has average temperatures of about freezing, because of the Gulf Stream, it feels like winter with roads covered in snow.

Perhaps it is the excellent marketing of Hurtigruten Shipping Company! 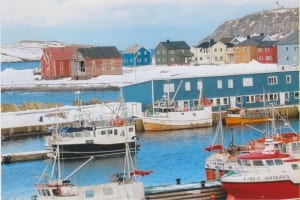 Hurtigruten has served coastal communities since 1893. The trip is widely known as “the most beautiful sea voyage in the world”. It starts at Bergen and reached Kirkenes, near the Russian border, after five days. We took the Bergen Rail line from Oslo (which is also widely known) as “one of the world’s most scenic railways”. A seven hour ride from sea to sea, it reaches a height of over 4,000 feet before arriving in Bergen. It is like riding a model railway.  There are settlements all along the way. Bergen is charming and the centre car free. There are iconic and colourful warehouses fronting the harbour. Barn red and ochre yellow are Norwegian vernacular colours. It was the home of composer Greig who is buried locally.

On the return sailing we flew back from Tromso, known as the Capital of the Arctic. It has over 50,000 people and is surrounded by a beautiful lake. It experiences two months of continuous light in summer and two months of darkness in the winter. It has an underheated pedestrian main street. Alesund is full of art nouveau buildings paid for by Kaiser Wilhelm, after a fire razed it in 1904. Perhaps an early warning for the 1940 invasion by Germany! Kirkenes was the worst bombed place after Malta in WW2. Many of the northern communities lost their charm on being rebuilt.

Trondheim however escaped destruction and has a glorious mediaeval cathedral. It is where the Archbishop of Norway hangs out. There are about thirty ports that Hurtigruten serve. The more picturesque northern fishing villages and towns had women going shopping on push sleds with baskets. The merest downward grade allows a smooth snowy ride. 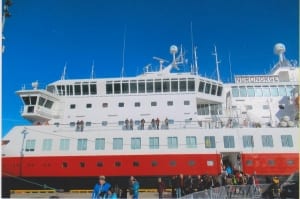 We had to miss Molde because of rough seas, so were unable to view the stricken Viking Sky. Passengers had to be air lifted by helicopter the week before we set off on our own saga.

Norway used to be a poor country surviving mainly by fishing. That was before exploitation of oil and gas off the coast, although there were few signs of this. Now it is rich but, unlike Alberta, has not frittered away its heritage fund. In fact gas is nearly three times as expensive as Canada and taxes are very high, as is the cost of living. This is the socialist answer to contentedness. Electric cars are now in the majority partly because they get so many financial breaks, on parking, tolls, ferries etc. Ironically Norway’s Heritage Fund is investing heavily in a green future.

The cruise had several surprises for me. First the accommodation was plusher than I imagined. The food was almost gourmet and I am afraid I felt overfull most of the voyage. A series of islands shelters most of the journey and there is mountain scenery almost the whole way, often on two sides. However there were no steep sided fiords so often promoted in travel literature. There were major ports each day where you could walk straight into the centre of town. There were presentations on board nearly every day by humorous “expedition leaders” about the local geography and Norwegian life. One of their jokes was the only way to get free alcohol is to use the hand cleansing devices. There were a few cases of upset stomachs with people confined to their cabins. 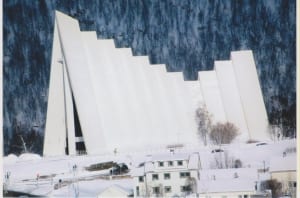 Norway is not in the EU but is in the commercial union with freedom of movement, the line that British Labour are pursuing. This means no trade deals other than the Euro ones with no say on what they are.  The Poles are by far the largest immigrant group, mostly in building.

It is a special kind of tourist who revels in this type of cruise: those who are not fazed by poor weather and love the wilderness and isolated communities. These are people who knit, read books, socialise, watch mile after mile of black mountains covered in snow and are fascinated by the water and weather movements. We did not see the Northern Lights so I will have to be satisfied with those seen in Worksop!

The cruise price is not unreasonable but on the ship only water is free. Everything else is exorbitant, $500 for a wine package for 11 days and very expensive excursions. We therefore limited ourselves to one in Kirkenes where we visited an ice hotel with impressive ice sculptures mostly depicting northern animals. As well, this was the husky mushing centre where a couple of hundred mixed breed huskies live. All the dogs were friendly and were available for a “cuddle”. There were also three reindeer in a field one of which was white, a one in a hundred chance. Push sleds were available for a sedate ride down a gentle slope.

Another surprise was the lack of animal life. The only time we saw birds in any quantity was on an island on the North Cape – nothing out of the ordinary – puffins, kittiwake and guillemot. We saw zero wild animals. All this is in contrast to coastal Britain. We also heard a lot about the Sami people but never saw or met even one. This group, who live in Norway, Sweden and Finland, follow the reindeer herds on the migrations although some stay on the coast to fish. The word Lapps is no longer used in the same way Eskimos are now known as Inuit.

The most surprising feature to me were the large size and quality of the well maintained homes, especially in the far north where I was expecting more poverty and the simple life. How much fish do you have to catch to get all today’s modern conveniences? All homes are heated by hydro-electricity and nearly all towns are connected by roads after a massive spending budget by the Government. At 24 km, Norway has the longest road tunnel in the world, near the famous tourist attraction of the Sogne fiord.

While our twin bedded cabin had a decent sized window and enough storage, (although somewhat squished shower) it did not have a TV. The public TVs were silent and special requests had to be made for volume and channel. Brexit, the most fascinating political process currently, was in one of its more tortuous phases. Lack of private TV was a major point impacting the tour in my view. The whole cruise could have been better as there was little entertainment.

However you could have water ladled down your back as we crossed the Arctic Circle and there was a prize for guessing the exact time of crossing. There was also an opportunity to take a dip in the near zero degree sea waters. Amazing what people will do for fun!

The buffet breakfast and lunches and set table evening meal were superb with local produce bought from various ports. Naturally fish starred. Reindeer meat was featured one evening. The dinner meant mixture with strangers and fortunately we were at a table with a most amiable and amusing English couple. They loved northern exposure so much they had moved to Wick, one of the most northern towns in mainland Britain. Since the ship was full, table changing would have been all but impossible. We booked early to choose our cabin and were fortunate to get a great table with a view just above the waves at the back of the ship. An early sitting was essential for our biological clock. There were no choices for dinner except if you had pre-booked dietary requirements. Noise and juddering at docking was also an issue especially at night.

Afterwards we spent a couple of days in Oslo which raised our spirits no end. We returned to see the world’s most human collection of sculptures. Fifty years previously we had spent a week in Norway staying in youth hostels. We booked accommodation by an exchange of letters and were escorted by a parent!

The transit system is one of the best in the world; trains, subways, trams and buses are fully integrated. Both trains and roads run under the City Centre as well, of course, subways. This is the formula for a highly civilised City.

The quality of new buildings is remarkably good. There are some long straight dull older streets but the buildings are divided vertically which adds interest. This urban design approach has been used at the waterfront for mid-rise buildings where different style balconies lean like plants to light for water views. Premium office blocks have been dealt with in the same way and give a frame to iconic lower buildings such as the dramatic opera house on the water where you can walk up a ramp onto the huge roof viewing platform. It is very white. What City Hall lacks in asymmetry it makes up for in interior Nordic murals. Pedestrians rule and there are few private cars in the downtown because there is no need for them. Small electric scooters have become popular for extra speed. However fish and chips and seafood chowder cost $30 each on the waterfront. Nevertheless great urban design breeds a great economy and quality of life.

We walked the quiet streets to see the graves of Munch and Ibsen. The palace is on an eminence close to the centre. Norwegians voted by referendum for a monarchy. Norway became an independent country in 1905 after splitting from Sweden in a rather one-sided union. The Parliament is elected by proportional representation.

There is an ancient castle and cathedral. It has the most density of sculptures and museums of anywhere I have seen. It really feels like a city in a park. A new National Museum is being built along with a Munch Museum whose bulk lends an unusual mass to the waterfront. A new and spectacular City Library opens later this year and acts as a community hub with movie theatres, restaurants gaming rooms, etc. In a couple of years we will see the best planned City implemented.

We certainly would enjoy living there. We highly recommend Oslo – if you can affiord it!