At May 29, 2019 meeting, Toronto Preservation Board has adopted recommendation to declare city’s intent to designate 1 Blue Goose Street under Ontario Heritage Act

Toronto Preservation Board to consider designation of the historic Blue Goose Public House (Windsor House) in Mimico on April 20, 2017 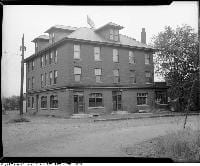 The Toronto Preservation Board adopted the recommendation to declare the city’s intent to designate 1 Blue Goose Street under the Ontario Heritage Act, and approved modifications to the building as part of the redevelopment proposal for the property.

The recommendation will now travel to the next Etobicoke York Community Council meeting on June 25, 2019 for consideration.

Stories we tell ourselves, about ourselves, help determine the course of our... May 30, 2019 message from Heritage Toronto highlights recent Bill 108 Town Hall...
Scroll to top