Intensive testing has vastly reduced infections in South Korean, Taiwan, and Singapore; in Canada the focus is now on minimizing the quickness of the ‘forest fire’ as it burns, yet testing still remains a key requirement

A March 18, 2020 Globe and Mail opinion article, which sums up the current situation, is entitled: “COVID-19 will spread like a forest fire. We need to control the burn as best we can.”

It can be helpful to think of the COVID-19 pandemic as a forest fire. Those infected with COVID-19 are sparks being thrown off and those uninfected are the fuel. We know that the fire is going to spread, but we want to control the burn as best we can.

I’ve been following comments from (among others) David Fisman, an epidemiologist at the University of Toronto’s Dalla Lana School of Public Health.

At this post I will focus on strategies that countries have adopted, with regard to testing for COVID-19.

Canada has not been able to do the kind of intensive testing at earliest stages of the outbreak that South Korea, Taiwan, and Singapore have been able to do.

Much can be achieved through measures such as social distancing that slow the spread of infection.

At the same time, testing remains a key requirement.

I will start by reviewing articles from a week ago and will conclude with an update based on more recent ones.

Despite this, Canada’s testing figures are nothing to celebrate, according to some experts. For instance, they’re a far cry from South Korea, which is able to do 10,000 tests a day, an approach that is credited with helping the country contain the outbreak and avoid the type of spike in cases seen in places such as Italy.

David Fisman, an epidemiologist at the University of Toronto’s Dalla Lana School of Public Health, has argued for weeks that the limited testing being done in Canada would put the country at a severe disadvantage. And that means officials must adopt population-wide strategies to stop the spread of disease, primarily by focusing on social distancing, he said.

David Fisman is quoted as well at a previous post which refers to a March 16, 2019 CBC article entitled: “‘The time is now to act’: COVID-19 spreading in Canada with no known link to travel, previous cases. At least 3 provinces reporting community transmission in Canada as experts urge immediate action.”

Not all experts are as optimistic that social distancing will be effective in this outbreak, however, now that community transmission has likely begun in Canada.

Fisman said Canada “squandered” opportunities to learn from countries such as China, South Korea, Singapore and Taiwan in proactively curbing the outbreak as opposed to countries like Italy that have seen an “explosion” in new cases and deaths.

“We’ve chosen to go the route of Italy and I think unfortunately at this point the die is cast,” he said.

“Hopefully I’m wrong about that.”

At another previous post, I refer to three articles that warrant close study.

Rather than focusing entirely on new stories at the current date (today being March 18, 2020), I’ll start by reviewing three articles that I’ve written about earlier.

Among them is a March 13, 2020 CBC report related to COVID-19 which notes that “reacting early and aggressively is the key to avoiding crisis.”

I’ve addressed key points from the article at earlier posts most recently at one entitled:

It’s best to respond early and aggressively to COVID-19

A third article, from the Globe and Mail and dated March 12, 2020 notes that “Doctors say coronavirus test criteria and inconsistent, could lead to dangerous gaps.”

At still earlier posts, I also refer to early reports from Italy:

Jason Van Schoor quotes a well respected friend who says, “I feel the pressure to give you a quick personal update about what is happening in Italy”

ICU physician Dr. Daniele Macchini in Bergamo, Italy (March 9, 2020): “The media in Europe are reassuring, politicians are reassuring, while there’s little to be reassured of”

Below are links to some additional, more recent articles.

A March 17, 2020 Science News article is entitled: “People who didn’t know they had COVID-19 drove its spread in China. A new simulation shows why rapidly expanding social distancing measures are crucial.”

An excerpt (which includes a link to an article about testing in the US) reads:

Italy, which reported a single-day high of 368 deaths on March 15, currently is experiencing a surge of severe COVID-19 cases that are placing an enormous strain on the hospital system.

Testing, tracing must be ‘backbone’ of COVID-19 response

A March 18, 2020 Reuters article is entitled: “WHO says testing, tracing must be ‘backbone’ of COVID-19 response.”

Countries across the world must take a comprehensive approach to fighting the pandemic of COVID-19 disease caused by the new coronavirus and isolate, test and trace as many cases as possible, the World Health Organization said on Wednesday.

“If they don’t, transmission chains can continue at a low level and then resurface once physical distancing measures are lifted,” he added. He said the test and trace strategy “must be the backbone of the response in every country”.

“You cannot fight what you cannot see”

A March 18, 2020 Reuters article is entitled: “Special Report: How Korea trounced U.S. in race to test people for coronavirus.”

South Korea’s swift action stands in stark contrast to what has transpired in the United States. Seven weeks after the train station meeting, the Koreans have tested well over 290,000 people and identified over 8,000 infections. New cases are falling off: Ninety-three were reported Wednesday, down from a daily peak of 909 two weeks earlier.

The United States, whose first case was detected the same day as South Korea’s, is not even close to meeting demand for testing. About 60,000 tests have been run by public and private labs in a country of 330 million, federal officials said Tuesday.

As a result, U.S. officials don’t fully grasp how many Americans have been infected and where they are concentrated – crucial to containment efforts. While more than 7,000 U.S. cases had been identified as of Wednesday, as many as 96 million people could be infected in coming months, and 480,000 could die, according to a projection prepared for the American Hospital Association by Dr. James Lawler, an infectious disease expert at the University of Nebraska Medical Center.

“You cannot fight what you cannot see,” said Roger Klein, a former laboratory medical director at the Cleveland Clinic and previously an adviser to the U.S. Department of Health and Human Services on clinical laboratory issues. 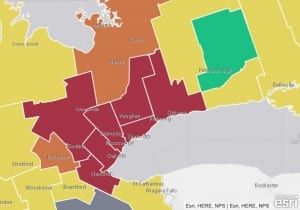 The article notes that Dr. David Fisman, Division Head in Epidemiology at the University of Toronto’s Dalla Lana School of Public Health, has “expressed concern that the ILI Mapper is not being used adequately as the surveillance tool it was intended to be.”

“The point of this tool is to map out some codes because you don’t always see things with diagnosis,” explained Fisman. “Ontario is supposed to have surveillance for precisely this reason, to discover illness in places where we didn’t think it was.”

We can add that the ILI Mapper site is currently not in operation; the following notice appears when you click on its link:

Long-time visitors to ILI Mapper will know that each week we update our projections during seasonal influenza as we have done for the current 2019-2020 season.

However, those projections and the associated maintenance take time and, given that we are nearing the typical end of seasonal influenza, we have decided to cease ILI Mapper updates this year with immediate effect so that we may focus on our COVID-19 response.

Our intention is that ILI Mapper will resume again in the fall of 2020 for the next influenza season.

A March 21, 2020 Globe and Mail article is entitled: “Hospital-based labs mobilize to test for COVID-19 and alleviate backlog.”

Most people who contract COVID-19 will experience relatively minor symptoms and may not realize they’re infected, which means they are likely to go out in public and spread the disease to others, said Janine McCready, an infectious diseases physician at Toronto’s Michael Garron Hospital. That’s why so many experts are so insistent on the need for increased testing capacity in Canada: in order to understand the scope of the problem and stop transmission, officials need a realistic picture of how many people are infected, Dr. McCready said.

“Before you even realize you have it, you could have already exposed a number of other people,” she said.

Dr. McCready said she has contacted numerous patients in recent days who were surprised to learn they tested positive for COVID-19, as their symptoms were so mild.

She and other infectious disease experts say there is widespread community transmission of the virus in Ontario, meaning infections with no known link to international travel. Despite this, Ontario officials have stopped short of confirming community spread in the province.

An April 17, 2020 Guardian article is entitled: “Test and trace: lessons from Hong Kong on avoiding a coronavirus lockdown:Semi-autonomous city followed WHO advice and moved swiftly to stem contagion without rigid curbs on movement.”

Governments in Europe and the US can learn from Hong Kong, which has kept infections and deaths from Covid-19 low without resorting to the socially and economically damaging lockdown that the UK and other countries have imposed, scientists say.

Hong Kong, with a population of nearly 7.5 million, had had just 715 confirmed cases of Covid-19 infection, including 94 asymptomatic infections, and four deaths as of March 31, according to a new study published on Friday in the Lancet.

Early in the pandemic, it was thought to be at significant risk because of travellers arriving from mainland China, but since early February the outbreak has appeared to be under control.

The result, notes Dr. David Fisman, U of T professor of epidemiology in reference... Intensive testing for COVID-19 is recommended by WHO; in Canada, public health...
Scroll to top