My own bottom line: As a person with an interest in local history and land use planning issues as viewed from the vantage point of everyday residents of Ontario, my first thought is always: How does the rhetoric compare with the reality?

An additional thought is: Power at times speaks its own language. In such a language, big is small, in is out, and up is down.

Regarding COVID-19, the political rhetoric says: We are aligned with the science.

The evidence to date, however, is that the rhetoric is not fully aligned with the reality particularly with regard to strategy.

My own approach: I seek to follow the science, which in practical terms means the one thing I can do is to excel at physical distancing.

Recent posts at this website have focused on testing and social distancing; for example:

Intensive testing for COVID-19 is recommended by WHO; in Canada, the public health messaging appears to emphasize restrictions in coronavirus testing

Intensive testing has vastly reduced infections in South Korean, Taiwan, and Singapore; in Canada the focus is now on minimizing the quickness of the ‘forest fire’ as it burns, yet testing still remains a key requirement

The result, notes Dr. David Fisman, U of T professor of epidemiology in reference to CDC, is basically a decapitated public health system 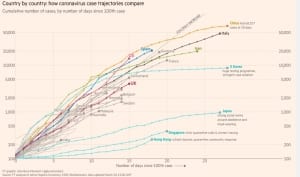 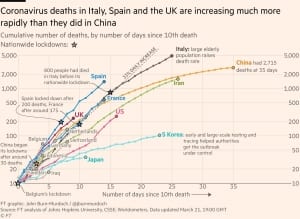 Still earlier posts focusing on China and Italy include:

Jason Van Schoor quotes a well respected friend who says, “I feel the pressure to give you a quick personal update about what is happening in Italy” 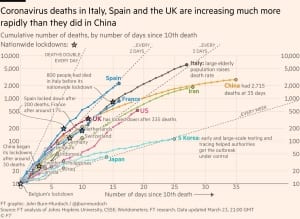 ICU physician Dr. Daniele Macchini in Bergamo, Italy (March 9, 2020): “The media in Europe are reassuring, politicians are reassuring, while there’s little to be reassured of” 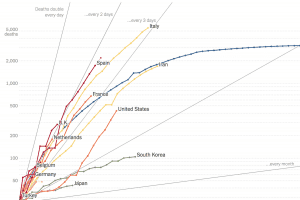 Describing the province’s efforts to battle COVID-19 as piecemeal and ineffective, one of Ontario’s 34 regional medical officers of health is urging his colleagues to band together and use more powerful measures to contain the pandemic that provincial leaders have yet endorsed.

In an email obtained by the Star, Dr. Shanker Nesathurai wrote Thursday that Ontario’s response has undermined the province’s attempt to contain the outbreak, as businesses remain open and travellers ignore advice to self-isolate. He writes that “many” other medical officers of health, who are leading the regional response to the pandemic, believe Ontario needs to take a more assertive response.

Nesathurai called on his colleagues to use their legal authority to require businesses to close and people to stay home.“We do not have the luxury of time,” wrote Dr. Nesathurai, the medical officer of health for Haldimand Norfolk Health Unit. 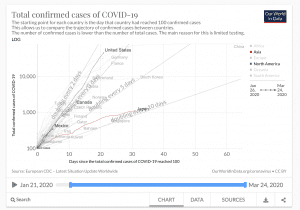 I subscribe to the CBC Second Opinion newsletter. I was most interested to read the most recent edition as it covers superbly well the topic of testing for the COVID-19 virus. 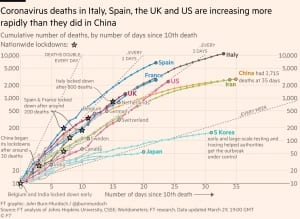 The text of the above-mentioned newsletter/article follows below (I have omitted links to several related, relevant articles; please refer to the original CBC article to access them): 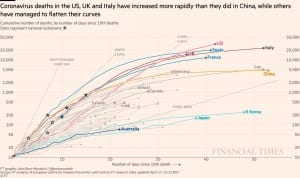 ‘Test the neighbourhood, test the relatives, test the friends,’ says expert in Italy

This is an excerpt from Second Opinion, a weekly roundup of eclectic and under-the-radar health and medical science news emailed to subscribers every Saturday morning. If you haven’t subscribed yet, you can do that by clicking here.

A scientist on the front line of Italy’s fight against the COVID-19 outbreak is issuing a plea to countries like Canada: Test everyone possible, even people not showing symptoms.

“Test the neighbourhood, test the relatives, test the friends, and isolate all positive individuals,” said Andrea Crisanti, an infectious disease expert at Imperial College London who is working on the ground in Italy.

“If you do it now, you will stop the disease.”

While on sabbatical at the University of Padua, Crisanti has been participating in a mass testing experiment for COVID-19 infections in Vò, a town of roughly 3,400 people located west of Venice.

Though the country’s overall death toll is in the thousands and climbing, Crisanti said Vò has effectively stopped its local outbreak by testing — and retesting — every single resident, regardless of whether they showed any symptoms.

The town had its first confirmed COVID-19 case on Feb. 21, he said.

The initial round of testing that month showed three per cent of the population had been infected with the illness. Every single one of those residents was then put under isolation at home and not allowed to have any contact with others.

Ten days later, the entire town was retested — at which point the rate of infection had dropped to 0.3 per cent, marking a 90 per cent decrease.

He said given the high number of people who didn’t show symptoms, the takeaway for other countries is to test widely, catch all possible cases early, and isolate them to prevent the virus from spreading like wildfire through a community. 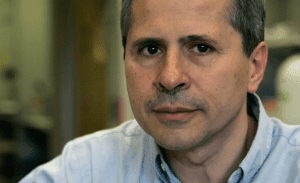 It’s a call echoed by a growing chorus of global experts, from Canadian infectious disease specialists to the World Health Organization, amid increasing concern over countries not knowing the true number of infected individuals.

“We clearly need to rapidly scale our capacity to test more broadly because that will be extremely helpful in enabling Canada to follow a similar path as South Korea, Japan and Hong Kong,” said Dr. Isaac Bogoch, an infectious disease physician at Toronto General Hospital.

“We want to take that pathway – not the pathway of countries like Italy, Iran and Spain.”

Dr. Theresa Tam, Canada’s chief public health officer, said Friday at least 66,000 tests have been done in this country, with 10,000 of those in the 24 hours since Thursday alone.

On Wednesday, Health Minister Patty Hajdu signed an interim order to obtain more diagnostic test kits and other medical devices to address the growing need amid a rise in cases.

“Early diagnosis is a critical component,” Hajdu said. “So we are taking extraordinary measures to help make that happen as quickly as possible.”

One crucial reason for widespread testing, as the Vò experiment suggested, is that it could catch anyone who may be unknowingly carrying the virus and potentially spreading it across Canada.

There are two types of patients who could be doing this without their knowledge.

Asymptomatic carriers show absolutely no symptoms, while subclinical carriers are people who may have mild symptoms but aren’t sick enough to seek medical care. In both cases, these people could be flying under the radar — unless they’re tested.

The degree to which that’s happening right now is the “million-dollar question,” says Jason Kindrachuk, an assistant professor and Canada Research Chair in emerging viruses at the University of Manitoba.

“Everybody wants to know exactly what role people with asymptomatic or subclinical infections are playing in transmission,” he said. “The simple fact is, where we are right now, we still don’t know.”

Since the virus is so new, research is just beginning to emerge shedding light on how it transmits.

One study published in the journal Science this week found COVID-19 patients in the epicentre of the outbreak in Wuhan, China, with mild, limited or no symptoms went “unrecognized” and exposed “a far greater portion of the population to virus than would otherwise occur.”

The study concluded that these “undocumented infections” were the source of transmission for up to 79 per cent of documented cases in the city.

‘Every inch of my body hurt’

In Ontario, where there are now more than 300 confirmed cases of COVID-19 — close to a third of Canada’s total — health officials say 3,000 tests are now being conducted each day, with a goal of eventually conducting 5,000 daily tests by expanding laboratory access.

Officials are “very aware of the need to increase our capacity for testing,” Ontario Health Minister Christine Elliott said this week.

She said some residents face at least a four-day wait to learn their test results, which she called “unacceptable.”

Other Canadians have told CBC News they simply weren’t tested at all, despite showing symptoms that aligned with COVID-19.

That was the case for Ontario couple Curtis Connor and Kris Chandler, who live in Paisley, a village about 200 kilometres northwest of Toronto.

Both fell ill on March 4, and say the symptoms went beyond any flu bug they’d experienced before — including days-long fever, pain and breathing problems.

“I felt that my lungs had caught fire,” said Chandler, 49. “I couldn’t walk 10 steps without losing my breath.”

Chandler suspects their illness stemmed from her workplace, where shift workers are often travelling in and out of the country, but she may never know for sure.

Despite seeking medical care and asking to get tested, the pair was told by their physician that no one would be tested unless they’d travelled abroad themselves. Since the couple hadn’t been away, they’re now left without answers.

According to Dr. Margaret Tromp, president of the Society of Rural Physicians of Canada — which includes roughly 2,000 small-town clinicians — rationing testing to diagnose vulnerable patients has been a directive from many local public health units.

“Testing is not that readily available because we have a limitation on the number of swabs that are available,” she said.

“It obviously would be better if we could test more people, but we have to be realistic when a pandemic comes and we need supplies, that supplies cannot be instantly produced.”

Widespread testing is ‘eyes and ears’ of epidemic

While government efforts could soon expand Canada’s testing capacity, Dr. David Fisman, an epidemiologist with the University of Toronto’s Dalla Lana School of Public Health, says the lack of kits is leaving the country without its “eyes and ears” in the outbreak.

“If we don’t have lots and lots and lots of testing, and if we’re not testing in places where we don’t expect to find [COVID-19], then we’re not going to know the full extent of this epidemic, and not be able to come up with the best ways to protect ourselves,” he said.

Dr. Tedros Adhanom Ghebreyesus, director-general of the World Health Organization, stressed Monday the most effective way to prevent infection and save lives is by “breaking the chains of transmission” through widespread testing and isolation.

“You cannot fight a fire blindfolded and we cannot stop this pandemic if we don’t know who is infected,” he said. “We have a simple message for all countries: Test, test, test.”

Speaking to CBC News by phone from Italy, Crisanti said Canada needs to take cues from other regions where mass testing is the new normal, including the Italian town of Vò.

“If you hadn’t tested everyone like that,” he warned, “there would have been no way to know just how high the infection rate really was.”

Please note the full CBC article has links to many related CBC articles.

An April 17, 2020 Guardian article is entitled: “Test and trace: lessons from Hong Kong on avoiding a coronavirus lockdown:Semi-autonomous city followed WHO advice and moved swiftly to stem contagion without rigid curbs on movement.”

Governments in Europe and the US can learn from Hong Kong, which has kept infections and deaths from Covid-19 low without resorting to the socially and economically damaging lockdown that the UK and other countries have imposed, scientists say.

Hong Kong, with a population of nearly 7.5 million, had had just 715 confirmed cases of Covid-19 infection, including 94 asymptomatic infections, and four deaths as of March 31, according to a new study published on Friday in the Lancet.

Early in the pandemic, it was thought to be at significant risk because of travellers arriving from mainland China, but since early February the outbreak has appeared to be under control.

Countries that do well in current crisis have good testing and a good system... Rate of known coronavirus cases in Taiwan is one-fifth the rate of known cases...
Scroll to top