Sweden remains relaxed about public restrictions in favour of its own, unique brand of cultural exceptionalism in response to new coronavirus

Sweden’s approach to COVID-19 has been changing 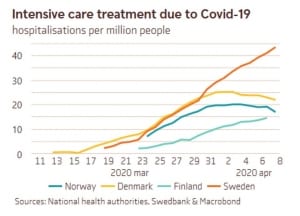 Graph from April 10, 2020 Forbes article entitled: “Sweden Continues With Controversial Coronavirus Strategy: Is It A Big Mistake?” Caption reads: Sweden’s line on this graph in particular looks troubling compared to its neighbors. SWEDBANK

At this post I will first talk about other countries and then about Sweden. In future I will seek news about how Norway among other Scandinavian countries is approaching physical distancing. I have a particular interest in what is working really well, by way of public health strategies around the world.

Portugal has shut down all non-essential services, closed all schools and nightclubs, and banned gatherings of large groups.

An excerpt from the New York Times article reads:

LISBON — Portugal’s Prime Minister Antonio Costa said it was too soon to lift a lockdown to slow the novel coronavirus, even though the number of cases in the country is more than 10 times lower than in neighbouring Spain.

“Prudence above all,” Costa told a news conference on Thursday. “The spread of the pandemic is slowing but we have not reached the day that we can lift measures restricting movement. We can only do it when the trasmission risk is under control.”

He said schools will remain closed for the rest of the academic year, with classes to continue remotely.

An April 10, 2020 Reuters article is entitled: “Ireland extends coronavirus lockdown until May 5.”

The restrictions we introduced two weeks ago were due to expire on Sunday. Today the expert recommendation is to extend them for a further three weeks,” he said in a televised address.

Ireland has shut bars, restaurants and non-essential retail and told people not to travel more than two kilometres (1.2 miles) from their home or visit friends and family.

Australia, like neighbouring New Zealand, has fewer infections than many countries and the pace of infections in both nations has slowed dramatically in the past week.

On Friday, New Zealand began moving citizens to compulsory quarantine on their return from overseas, as it steps up efforts to battle the virus halfway through a four-week nationwide lockdown.

Its new infections rose 23 to stand at 1,015, with a second virus death recorded.

In Australia’s island state of Tasmania, police will use helicopters to spot unnecessary travel, Premier Peter Gutwein said, as part of a state-wide blitz.

In the United States, rates of physical distancing vary widely

An April 2, 2020 New York Times article is entitled: “Where America Didn’t Stay Home Even as the Virus Spread.”

Stay-at-home orders have nearly halted travel for most Americans, but people in Florida, the Southeast and other places that waited to enact such orders have continued to travel widely, potentially exposing more people as the coronavirus outbreak accelerates, according to an analysis of cellphone location data by The New York Times.

The divide in travel patterns, based on anonymous cellphone data from 15 million people, suggests that Americans in wide swaths of the West, Northeast and Midwest have complied with orders from state and local officials to stay home. Disease experts who reviewed the results say those reductions in travel — to less than a mile a day, on average, from about five miles — may be enough to sharply curb the spread of the coronavirus in those regions, at least for now.

“That’s huge,” said Aaron A. King, a University of Michigan professor who studies the ecology of infectious disease. “By any measure this is a massive change in behavior, and if we can make a similar reduction in the number of contacts we make, every indication is that we can defeat this epidemic.”

By way of contrast to jurisdictions that have adopted strict measures, an April 10, 2020 Forbes article is entitled: “Sweden Continues With Controversial Coronavirus Strategy: Is It A Big Mistake?”

There’s a growing media chorus pointing out that Sweden’s relatively relaxed approach to public restrictions amid the coronavirus outbreak is beginning to look like a mistake. One main factor is that Sweden’s death rate is continuing to climb more quickly than that of its Nordic neighbors. The rate of intensive care admissions at hospitals is also outpacing the likes of Denmark, Norway and Finland, as pointed out in a daily briefing compiled by Swedbank.

“I think it’s the right approach,” says Gabriel Mellqvist, a journalist at Dagens Industri. “I’d like to hope so, anyway. I like the fact that you can still choose for yourself. I prefer to have a ‘soft’ instruction that hopefully most people follow.”

That soft approach can have its drawbacks though, as Mellqvist points out, when it means the messaging is not entirely clear. “In Sweden we have this soft messaging and it gives a lot of room for interpretation and makes it confusing for some people.” He notes that there are reports of people gathering in large numbers at some vacation spots (link in Swedish) this week during the Easter break, for example. Heading to crowded holiday areas clearly goes against the guidelines, but it’s not technically illegal and no one will be fined or jailed for doing so, unlike in some other countries.

That’s down to a longstanding Swedish tradition of trust in the government. “Not everyone’s buying it, but big numbers are,” says Mellqvist. “We have a long tradition of doing what you’re told. And there’s a kind of non-alarmist principle which is deeply rooted in society.”

When walking, running, or cycling more than two metres of space is required to ensure safety from COVID-19

I will refer to a couple of other articles, before I conclude this post with a discussion of a Washington Post article which highlights the rationale behind Sweden’s relaxed approach to physical distancing.

An April 9, 2020 CTV News article is entitled: “Walking, running, or cycling? Why you should leave more than two metres of space.”

To avoid any chance of being hit by droplets in a slipstream, the researchers recommend that walkers stay at least four to five metres behind the person ahead of them, runners and slow cyclists keep a 10-metre distance, and fast cyclists leave 20 metres of physical distancing space.

But questions have been raised about the research and the accelerated timeline on which it was released. The report has not been published in a scientific journal or peer-reviewed, which means the research methods have not been tested by outside experts. Even so, images of the simulations have been widely shared on social media.

An April 1o, 2020 Guardian article is entitled: “Less than 1% of Austrians infected with coronavirus, study shows: Research appears to scotch hopes of countries being close to relying on ‘herd immunity’.”

An excerpt (I have omitted embedded links) reads:

Less than 1% of the Austrian population is “acutely infected” with coronavirus, new research based on testing a representative sample of more than 1,500 people suggests.

The government-commissioned study, reportedly the first of its kind in continental Europe, was led by the polling company Sora, which is known for projecting election results, in cooperation with the Red Cross, the Medical University of Vienna, and other institutions.

The study made it possible to estimate the prevalence of acute coronavirus infections in Austria among those not in hospital at the beginning of April, and was designed to provide a clearer picture of the total number of infections, given gaps in testing.

The research, if replicated and confirmed elsewhere, would appear to scotch hopes of countries being remotely close to relying on “herd immunity” – where enough of the population is exposed to the virus to build up a combined immunity – as a viable policy option.

The study stands in contrast to controversial modelling by researchers at Oxford University who, in one scenario they examined, suggested most people in the UK might already have been infected with Covid-19.

An April 8, 2020 Washington Post article is entitled: “Is Sweden’s lax approach to the coronavirus backfiring?”

The article is behind a paywall for which reason I  have not included a link to it.

The article notes that as of April 8, 2020 Sweden had no mandatory quarantines and few limitations on free movement. Elementary schools, malls, and gyms were open.  The government was considering stricter measures but some sidewalk cafes remained busy.

Enough data – such as Sweden’s per capita death toll  – exists, the article notes, to conclude that the current approach constitutes a gamble with human life.

The article adds that authorities have spoken of seeking to attain a so-called herd immunity. I have provided a link (please see above) to an April 10, 2020 Guardian article which suggests that evidence does not support such a herd-immunity strategy.

The article refers to Sweden’s “cultural exceptionalism;” its refers, as well, to the country’s “public health nationalism,” which “celebrates Sweden as an island of common sense in a sea of panic and resistance to science.”

Sweden has passed the grim milestone of 1,000 coronavirus deaths, far exceeding the tolls of its nearest neighbours, but suggested it may be nearing the outbreak’s peak as scientists continue to question the government’s light-touch approach.

The Public Health Agency announced a death toll of 1,203 people from Covid-19 on Wednesday, a rate of 101 per million inhabitants, compared to 51 in Denmark and just 11 in Finland, both of which imposed strict early lockdowns to curb the virus’s spread.

Sweden’s per-million tally is also significantly higher than the 37 recorded in Germany and the comparable US figure of 79 – but remains lower than the UK’s rate of 182 and far below Italy’s 348 and Spain’s 386.

An April 17, 2020 Euronews article is entitled: “Coronavirus in Sweden: ‘It’s a myth that life is going on as normal,’ says Swedish government.”

Sweden’s foreign minister, Ann Linde, who spoke alongside Carlson at Friday’s briefing in Stockholm, said the idea that life goes on as normal in Sweden is “a myth”.

“Many people stay at home and have stopped travelling. Many businesses are collapsing. Unemployment is expected to rise dramatically,” Linde said.

She argued that “Sweden shares the same goals regarding the COVID-19 outbreak as all other countries: to save lives and protect public health. We work with the same challenges as other countries – the scale and speed of the virus, the pressure on the national health system – and we use the same tools as most countries do.”

The article addresses issues related to dynamics related to social-distancing measures enacted by authorities in jurisdictions other than Sweden.

In a new National Bureau of Economic Research working paper, researchers surveyed nearly 900 Italian residents to explore what happens when expectations are shattered about how long social distancing measures, like self-isolation, would last. Participants were less willing to do more self-isolating when told that social distancing time frames would run much longer or shorter than they anticipated.

“In a context where individual compliance has collective benefits, but full enforcement is costly and controversial, communication and persuasion have a fundamental role,” the authors write.

The working paper to which the article refers includes a note that reads:

NBER working papers are circulated for discussion and comment purposes. They have not been peer-reviewed or been subject to the review by the NBER Board of Directors that accompanies official NBER publications.

Canada doesn’t have enough COVID-19 testing capacity, and might never... Broad outline of how different countries have responded to COVID-19 is now ...
Scroll to top