Updates regarding Sweden’s approach to COVID-19; Sweden’s rate of deaths per million is 6 times that of Norway

But Sweden now has one of the world’s highest Covid-19 mortality rates, with more deaths per 100,000 than the U.S., according to Johns Hopkins University data. Polls suggest Swedes have started to lose faith in their country’s response to the pandemic.

A June 26, 2020 BBC article is entitled: “Coronavirus: Sweden says WHO made ‘total mistake’ by including it in warning.”

According to WHO data, EU member state Sweden has seen 155 infections for every 100,000 inhabitants in the past 14 days, far higher than anywhere else in the organisation’s defined Europe region, other than Armenia.

A July 7, 2020 New York Times article is entitled: “Sweden Has Become the World’s Cautionary Tale: Its decision to carry on in the face of the pandemic has yielded a surge of deaths without sparing its economy from damage — a red flag as the United States and Britain move to lift lockdowns.”

Implicit in these approaches is the assumption that governments must balance saving lives against the imperative to spare jobs, with the extra health risks of rolling back social distancing potentially justified by a resulting boost to prosperity. But Sweden’s grim result — more death, and nearly equal economic damage — suggests that the supposed choice between lives and paychecks is a false one: A failure to impose social distancing can cost lives and jobs at the same time.

I’ve written previously about Sweden’s approach to COVID-19 and have outlined why news from Sweden interests me. You can find previous posts about Sweden by using this website’s internal search engine.

By way of an update, a May 1, 2020 Guardian article is entitled: “Has Sweden’s coronavirus strategy played into the hands of nationalists? Talk of Swedish exceptionalism and wounded national pride has echoes of the forces unleashed in Britain by Brexit.”

Another May 1, 2020 Guardian article is entitled: “‘We stick to the rules’: why cinemas in Sweden have stayed open during the pandemic: Many of the country’s movie theatres have continued to operate despite alarming death toll, with social distancing measures in place.”

Links to additional recent articles regarding Sweden are available at a post entitled:

By way of previous updates, an April 20, 2020 Tyee article is entitled: “Debates Roil Sweden and New Zealand, Whose Pandemic Policies Are Opposite: Plus, check-ins with four more nations fighting COVID-19 in different ways.”

An April 21, 2020 Nature article is entitled: “‘Closing borders is ridiculous’: the epidemiologist behind Sweden’s controversial coronavirus strategy: Anders Tegnell talks to Nature about the nation’s ‘trust-based’ approach to tackling the pandemic.”

With regard to herd immunity, an April 22, 2020 Guardian article is entitled: “WHO warns that few have developed antibodies to Covid-19: Herd immunity hopes dealt blow by report suggesting only 2%-3% of people have been infected.”

On the same subject, an April 25, 2020 CBC article is entitled: “Canada’s top doctor warns against relying on herd immunity to reopen economy: Quebec’s premier has touted the method as a way to get his province back to work.”

Canada’s top doctor says there isn’t enough evidence to back herd immunity as a way to reopen society, as Quebec’s premier is considering the approach to restart his province’s economy.

“The idea of … generating natural immunity is actually not something that should be undertaken,” Canada’s Chief Public Health Officer Theresa Tam said Saturday, urging people to be “extremely cautious” about the concept.

Herd immunity is conferred when enough people in a given population have been infected with a virus, marking them immune to reinfection and slowing down the rate at which the virus spreads on its own.

Sweden’s deaths per million is six times that of Norway

Sweden now has one of the highest death rates per capita globally due to COVID. 6X worse than neighboring Norway. 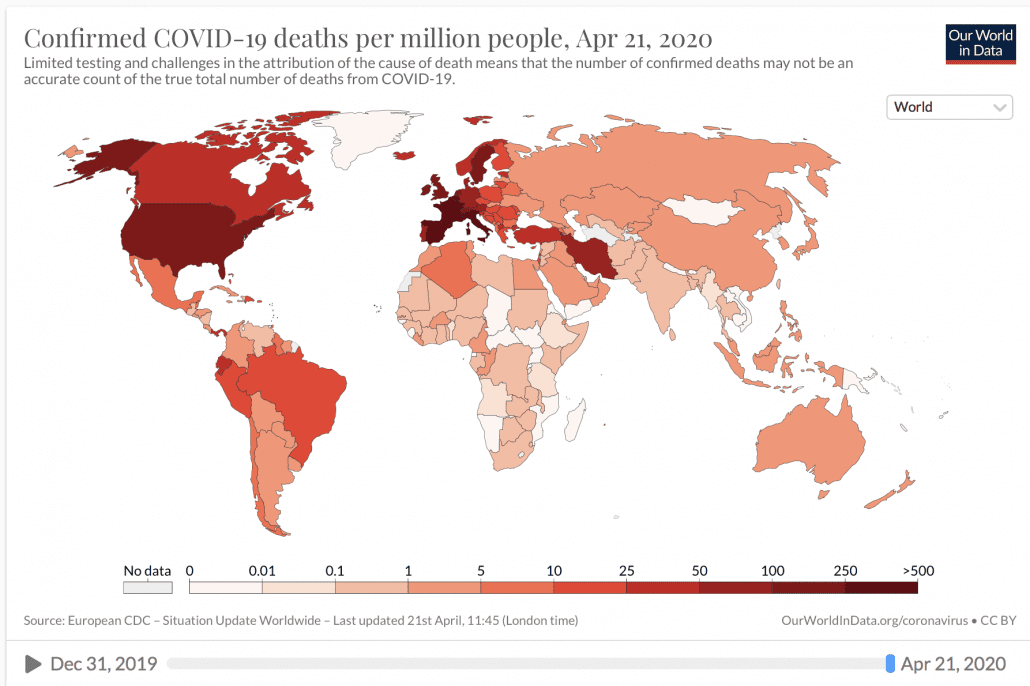 Screenshot from Our World in Data website – April 21, 2020; the image accompanies the tweet from Peter Daszak referred to at the current post. Text at top of map reads: “Limited testing and challenges in the attribution of the cause of death means that the number of confirmed deaths may not be an accurate count of the true total number of deaths from COVID-19.”

Our World in Data

The Our World in Data website data for April 21, 2020 notes that Sweden currently has 156.45 deaths per million according to available figures.

Britain’s rate of 243.19 deaths per million may be an understatement; an April 22, 2020 CBC article is entitled: “Britain’s coronavirus death toll may be vastly understated, study of data suggests: British government disputes analysis, but faces call for an inquiry into its coronavirus response.”

Since the lockdown, the government has given conflicting explanations of why it failed to join a European Union ventilator scheme and admitted there have been problems getting health workers enough protective equipment.

An April 21, 2020 Globe and Mail article is entitled: “The notorious nine: These world leaders responded to the coronavirus with denial, duplicity and ineptitude.”

The subhead reads: “While COVID-19 caught many countries off guard, some politicians’ responses have stood out as too slow or ineffective. Here are some of the highlights, from Belarus to Brazil and Cambodia to California.”

In recent weeks, much has been made of China’s alleged efforts to conceal the initial outbreak of the virus — an allegation Beijing strongly denies.

According to Ai, China’s selective handing of information early on provided a “chance for the virus to spread.” However, understanding China’s motivations is as important to Ai as the alleged cover-up, or the suggestion that the country’s infection numbers and fatalities have been under-reported.

“The West’s blame is very superficial,” said Ai. “They (in the West) only talk about China practically — (that it) doesn’t release information. But they never ask, ‘Why?'”

As Ai sees it, China would not function as a state without the “control and manipulation” of information.

“For China, everything is for political use. And they have a clear reason to give the numbers they want to, or to limit or to change or distort the so-called truth,” said Ai.

“A number means nothing to them,” he said, adding that there’s little recognition of the individuals and “deep souls” making up the death toll. “In many cases in China, you don’t even get the real names or how many people. They are completely lost because the state wants (to preserve) its own image.”

The broader topic here is state-level public relations, a topic I’ve addressed at previous posts including one entitled:

The blurb for Seeing Like a State: How Certain Schemes to Improve the Human Condition Have Failed (1998) closely matches contents of the book

New Zealand is at the other end of the continuum.

On April 22, 2020 New Zealand had 2.7 deaths per million, according to the Our World in Data website.

Context of storytelling about COVID-19 and other topics

All stories are part of a wider context of storytelling. This applies to stories related to COVID-19. This applies as well to all of the ways in which we as human beings seek to shape stories.

In this context, I was interested to come across an April 22, 2020 Nature article entitled: “Neurophysiological and behavioural markers of compassion.”

We identified neural networks associated with threat are reduced when practicing compassion, and heightened when being self-critical.

From my perspective as an observer, it’s my sense that it’s useful to contextualize neuroscience research; in that context, a previous post is entitled:

Brain Culture (2011) addresses the metaphor of brain as frontier

Of related interest is the concept of mindfulness, a topic explored at a page at this website entitled:

A related concept concerns the relationship between storytelling and the universe. The topic is a source of useful speculation. By way of example, an April 17, 2020 Undark article is entitled: “Book Review: A Physicist’s Grand Tour of the Universe: In ‘Until the End of Time,’ Brian Greene explores a stunning array of human thought, from evolution to consciousness.”

Greene’s biggest challenge – and ours – is to find meaning in a universe governed by unthinking and uncaring physical law. Steven Weinberg put it bluntly in his 1977 book “The First Three Minutes”: “The more the universe seems comprehensible, the more it also seems pointless.” Certainly the human experiment is temporary; one of Greene’s overarching themes is transience and the search for the timeless. We inhabit “a breathtaking if transient present,” Greene writes. By striving to understand the larger cosmos we gain perspective; it shows us “how singular and fleeting the here and now actually is.”

Not everyone will welcome the message, but Greene makes it crystal clear: It’s physics all the way down. “Particles and fields. Physical laws and initial conditions. To the depth of reality we have so far plumbed, there is no evidence for anything else.” And yet we yearn for more. Which means we have to construct our own meaning as best we can. “During our brief moment in the sun, we are tasked with the noble charge of finding our own meaning.”

Books that try to cover so much ground can easily falter. Harari, for example, can seem a little too eager to provoke; some writers seem to be overly keen on fitting the available facts to some preferred, over-arching theory. Greene, happily, does not fall into either of these traps. He is not selling you anything, he is merely relaying a story. But it is the grandest story one can imagine, told by a master storyteller. And look, you’re not going anywhere for a while. Buy this book, and buy Carroll’s “The Big Picture,” and hunker down.

Other jurisdictions besides Portugal have also responded quickly in face of... April 23, 2020 CBC article features timeline related to long term care in O...
Scroll to top