At a June 7, 2019 MCHS luncheon in Kitchener, we met Tony who graduated in 1972, and Gail who was meeting Lynn for the first time in fifty-five years! Most recent luncheon was in Woodstock

The current post is part of a series of posts connected with Malcolm Campbell High School luncheons held in Toronto and Kitchener.

The current post focuses on a get together that took place on June 7, 2019 at the Mandarin restaurant at 4220 King St. East in Kitchener. 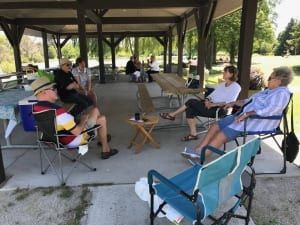 I began to work on this post on June 8, 2019 and spent time on it over several months, but then put it aside as I began to work on other things. I’ve returned to the post today, after an MCHS picnic get together at Southside Park in Woodstock, a 35-minute drive from Stratford, where I now live. We also have plans to meet in Toronto for a lakeside picnic on Sept. 24 and (tentatively) in Stratford on Sept. 30. Contact me through this website if you wish to be on our MCHS picnic mailing list.

The August 20, 2020 MCHS picnic luncheon was at the Boathouse Pavilion at the Southside Park, which was handy as there is protection in the event of rain, and washroom facilities are close by. We practised social distancing; the washrooms required masks. I will provide highlights of the event at a subsequent post.

We’ve had a number of MCHS get togethers between June 2019 and August 2020. However, starting in March 2020 we put the meetings on hold, until the recent picnic luncheon that we held in Woodstock.

We’re always keen to hear new stories – about fellow students and teachers, and about events since graduation – from fellow grads of Malcolm Campbell High School.

On June 7, 2019 when we met in Kitchener, we had two first-time attendees, which added much to everybody’s enjoyment of the event. 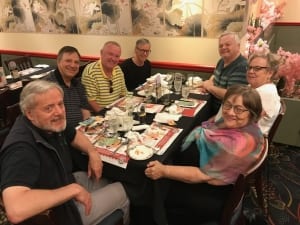 Among our guests on this occasion were Gail Howell de Vries  – who had not met anyone from MCHS since 1964 when she left Montreal after graduation; and Tony Gibara – who graduated in 1972.

Gail Howell de Vries spoke of how exciting it was to reconnect with MCHS students after fifty-five years. Tony Gibara shared some great anecdotes related to his career as a treasury risk manager.

By way of an update since our June 7, 2019 get together, Tony Gibara reports that his career has taken a steep turn; “I now work in compliance,” he notes, “more specifically I test compliance software.” A link – click here to access it – describes what he does.

The other grads at our June 7, 2019 Kitchener luncheon – Lynn Legge, Scott Munro, Dan McPhail, Terry Pendergast, and Jaan Pill – have attended at least one (in Terry’s case) or many more such get togethers.

As a person with a keen interest in the history of the Stratford Festival, I was really interested to know that Gail Howell de Vries became excited about Shakespeare when she saw a Shakespearean performance at the high school she attended prior to her attendance at Malcolm Campbell. 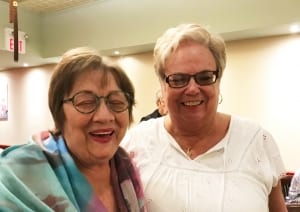 Gail (left) and Lynn moments after they met on June 7, 2019 at Mandarin restaurant in Kitchener

Gail’s daughter Amy studied drama in university (with a minor in journalism), after performing lead roles in drama all through high school in Bowmanville, east of Toronto. After university in Grand Rapids, Michigan, she spent a month in Shakespeare’s birthplace, Stratford-upon-Avon, England, where she discovered that she really didn’t want to make a living as an actor. As a result, she used her journalism minor to make a living as a journalist, instead.

View of interior of Festival Theatre, Stratford, prior to May 7, 2019 performance of Shakespeare’s play Othello. At the bottom of image you can see the thrust stage, which Tyrone Guthrie ensured was in place, for the launch of the Stratford Festival in 1953. Jaan Pill photo

While at university, Gail noted, regarding Amy, “She loved Shakespeare. She taught us all [the entire family] how to interpret Shakespeare.”

Gail’s daughter has gone to the Stratford, Ontario to attend plays every year since she was in Grade 9. This year they were going back to Stratford to see Othello again.

Gail shared with us a story about a previous visit to Stratford to see Othello; on that occasion there were many students in the audience, brought in by bus to see the play.

“The first play I took my future son-in-law to was Othello. And we sat up in the balcony and here the kids [students] are going [smacking sound; another smacking sound], like making fun of the theme, and I said to Amy, ‘That made me so upset,’ and she said, ‘Mum, mum, that’s what they do. And they’ve done that since Shakespeare’s day, mum. Just let them.’ I said, ‘Oh, it disturbed me so much, I felt so embarrassed.'”

Lynn Legge spoke of a school trip to Stratford involving grade 8 students, where students had to leave their cellphones at home. Normally, she said, students get an overnight trip but the one she observed had the trip spread out over three days.

Of the Sixties Reunion, Lynn remarked, “I don’t think we’ll have another one.”

I noted. “As you said [in a video that we posted], once we are in our seventies, “the energy for organizing is gone.”

Here’s the video from a few years ago that I refer to:

Gail attended her first two years of high school at St. Laurent High School before she transferred to Malcolm Campbell:

And Lynn, that turned me on to Shakespeare!

The quote goes on with much additional material of interest. However, it will take me some time to find the notebook where I’ve kept track of a transcript of what Gail said at the June 7, 2019 get together. I trust that what you’ve read so far will give you a sense of Gail’s enthusiasm for Shakespeare.

Fanfare at May 27, 2019 opening night’s performance of Othello

Below is a video that I made of a fanfare performed on the evening of May 27, 2019 just before the season’s opening performance of Othello at the Festival Theatre. It was absolutely wonderful to feel the energy in the air, as the performance was about to get underway. My Twitter version of this video, which I have posted as a pinned tweet, has been viewed over 1,500 times as of today’s date.

Tyrone Guthrie, as he outlined in his memoir, A Life In Theatre, viewed theatre as ritual, a characterization that the thrust stage enables. In such a ritual, audience members (seeing each other across the open stage, as they are seated on three sides of it) are at all times aware of each other’s presence.

That stands in contrast to theatre as illusion, a characterization that the proscenium stage (with audience members all looking in the same direction) enables.

In Blessings in Disguise, on the other hand, Alec Guinness – who along with Tyrone Guthrie played a key role in the successful launch of the Stratford Festival in 1953 – provides a more nuanced view regarding the advantages and disadvantages of the thrust stage, and of the practice of staging a play with minimal scenery. Reading both Guthrie and Guinness gives a person a more comprehensive view of things, than can be obtained by sole reading one or the other.

At a previous post, I’ve highlighted the history of the Stratford Festival:

In August 1991, the first-ever Canadian conference of people who stutter took... For anybody interested in oral history, a 2012 paper by Sheyfali Saujani warrants...
Scroll to top