A March 9, 2021 CBC article is entitled: “Long Branch community rallies as construction threatens to destroy 160-year-old tree: The Black Barn Maple of Eastwood is thought to have been a sapling in 1860.” 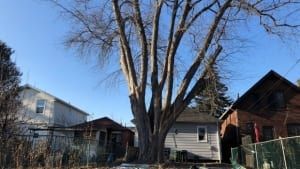 Photo is from March 9, 2021 CBC article highlighted at the current post. Caption: Known as the Black Barn Maple, the tree sits at the back of a bungalow slated for destruction. The owner, a developer, wants to cut it down to make way for a larger detached home on the property. (Robert Krbavac/CBC)

A community group in Toronto’s west end is ramping up its fight to save a tree believed to be more than 160 years old.

The maple tree, which has become something of a landmark in the area, sits at the back of a bungalow slated for destruction in the Long Branch neighbourhood. The owner, a developer, wants to cut it down to make way for a larger detached home on the property, located on James Street south of Lakeshore Road and east of Etobicoke Creek.

Sheila Carmichael of the Long Branch Community Association describes the tree as “large, healthy and historic.”

We lived in Long Branch from 1997 to 2018. In 2010 I learned (from a visit to the Toronto District School Board website) that Parkview School was about to be sold. That’s how I became involved with land use matters and with local history.

A key thing I’ve learned is that some projects are too big for one or two people to do on their own. I’ve also learned that by working together, people avoid burnout and get support and maintain balance in their energy and life. Occasionally I’ve summed up things I’ve learned, as in this post:

How to set up a local history website; some notes about starting neighbourhood associations; value of letter-writing efforts; plus notes on committee of adjustment meetings