I have received information that newly uncovered evidence suggests 182 Queens Ave. was built in 1902 rather than about 1898. I mention it in the interests of evidence-based accuracy.

The relevant source for this update is the following post at the History of the Town of Mimico website, which is a tremendously valuable source of information:

An excerpt (I have omitted embedded links in the text: to access those please go to above-noted link) reads:

This rather plain house at 182 Queens Avenue was built probably in 1902 by Robert Murray Herod a bricklayer and builder on Lot 162, Plan M77. (Note that my earlier post indicated a date of 1898 for the house however subsequent research has indicated he didn’t purchase the lot until June 1902). 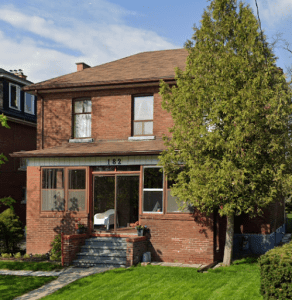 It was one of the earliest houses in Mimico, and on this stretch of the street. Given his occupation as a bricklayer and builder he most likely built it himself.

Robert was the son of William Herod and Ann Murray, born in Hagersville, Ontario in 1855.

Robert married Martha Ritchie, also from Mimico, at the Methodist Parsonage at 125 Dunn Avenue in Parkdale on August 13, 1889. They would go on to have six children

He first appears in Mimico in the 1899 Toronto City Directory (pg 58) living on Queens Avenue (hence the original posting that the house was built in 1898) and he and his family were enumerated there in the 1901 and 1911 census.

‘It would be a shame’: Owner proposing to split historic house at... CBC Tapestry: Basic Goodness – Episode 1: ‘You’ve pledged your...
Scroll to top