Tiny homes of interest to many people: Waterloo Region Record has been exploring the topic

I’ve recently read two Waterloo Region Record articles about the building of tiny homes, a topic of interest to many would-be homeowners. Such buildings are also of interest to residents who wish to set up a studio, remote work space, or rental unit in their backyard or laneway. 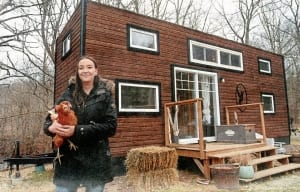 Image is from March 20, 2021 Waterloo Region Record. Caption reads: Bianca Metz holds one of the chickens that roams the yard around the tiny home she shares with her family near Hamilton. Metz has launched a consulting business, The Giving Tree, built on her experience transitioning to a tiny home. Photo credit: David Bebee, Waterloo Region Record

I’ve addressed a range of housing options at previous posts about the missing middle:

Click here for previous posts about the missing middle >

A March 20, 2021 Waterloo Region Record article by Robert Williams is entitled: “Dreams of bigger replaced by dreams of sustainable: If the tiny homes revolution is coming to Ontario, most municipalities are not ready.”

The article speaks of people shifting to permanent remote work, moving to any location where internet access is available. Certain practical details must be addressed, however. Relevant building codes and municipal bylaws vary widely from city to city. Many municipalities have not yet written bylaws.

The article features a new homeowner, who is having a tiny house built on wheels, for $80,000. She now faces the considerable challenge of finding a place to move her house to, once it’s built.

Provincial legislation passed in 2019 requires municipalities to allow additional units on various types of housing, but municipalities must pass the necessary bylaws. Few such bylaws have been passed and cities such as Kitchener, Cambridge, and Waterloo have each approached such housing options in their own particular ways.

The article notes that Bianca Metz, who lives in a tiny home with her family, has launched a consulting business, The Giving Tree, which offers consultation for people considering this housing option.

The article, also by Robert Williams, features Alberta’s Fritz Tiny Homes, “now one of Canada’s premier tiny home builders,” whose clients include Ontario residents. The article describes the tiny home movement in the United States as “spreading like wildfire” with many county and state bylaws having been passed.

The article notes Canadian tiny home builders must meet the building requirements of both the province and municipality in question. Standard prototypes go from around $60,000 to $100,000 with the higher-end options at $160,000 to $220,00. The majority of clients are women between 35 and 65. 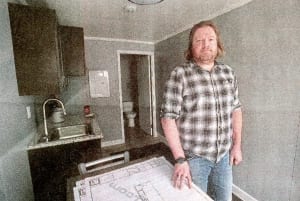 Some tiny houses come on wheels enabling them to be easily shipped. Others are not built on wheels and are designed more as permanent dwellings that can be shipped to their destinations.

Most builders, the article notes, such as Now Housing in Cambridge, offer fixed layouts that can be built on a standardized assembly line. The company is designing single-family as well as community housing.

Tired of the high cost of rent and with no hope of buying, one Toronto couple decided to make their own tiny home in the back of a cube van.

“We were both sick of the rent in Toronto,” Francis Hagendorn tells blogTO. “We were paying so much for rent, like $1,000 each for a one-bedroom, and it just felt like such a waste.”

Hagendorn, a Toronto tattoo artist, and her partner (who didn’t want to be named for this article), bought a 2012 Ford E450 cube van in January of 2020 and started work on it in March just as the pandemic started. They worked on it over the summer and left their Toronto apartment in October.

An April 24, 2021 New York Times article is entitled: “What ‘Nomadland’ Exposes About Fear in America: People who live in homes-on-wheels should not have to be in constant fear of ‘the knock.'”

There are a few bright spots. Some towns have created areas where vehicle dwellers can sleep undisturbed, modeled after the Safe Parking Program that began in 2004 in Santa Barbara, Calif. But those places are few and far between.

More often “the knock” is the law of the land. In the run-up to the Oscars, some have asked what viewers might take away from the film. Letting vehicle dwellers exist in peace would be a fine start. Individuals have the power to help. When you see someone living in a car, van or RV, don’t call the police.

If you’ve seen the movie, remember how the knock made Fern cringe, her voice tightening with anxiety and exhaustion as she shouted, “I’m leaving!”

Then envision a kinder scene, in which people can eat or sleep in peace — even if their homes are on wheels.

A March 30, 2021 BBC article, which refers to the tiny house movement, is entitled: “Have we got minimalism all wrong?” 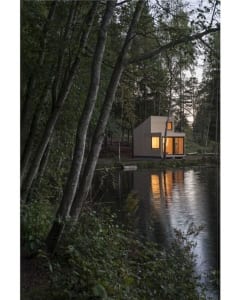 No wonder minimalism is a growth industry; the “stuff” mountain is getting bigger: the average US household owns 300,000 items; and additional storage space is real estate’s most active growth area. Reacting against this is the “tiny house” movement; homes that are usually 40 sq m or less and are often self-built, reflecting a growing desire for reduced living costs and greater simplicity and freedom. The movement began in the US, and is gradually catching on elsewhere.

While Sweden’s MMC craze ramped up in the 1960s, the Finns’ use of such methods had peaked in the post-World War Two years. There, it was a response to a humanitarian crisis. The Russo-Finnish Winter War of 1939-1940 had displaced 420,000 Finns. There was a desperate shortage of housing, so Puutalo Oy (Timber Houses Ltd) was formed to get building. Traditional building methods, materials and levels of labour weren’t going to work. So architects – including Toivo Jäntti, designer of the 1928 Helsinki Olympic stadium – and industrialists joined forces to create a new model of factory-built housing that modernised the country’s construction industry. “It was the first major attempt to industrialise wooden construction,” says academic Kristo Vesikansa at Aalto University in the Finnish city of Espoo.

An April 8, 2021 CBC article is entitled: “Why don’t we live together? Alternative housing in a hot real estate market. Experts and residents say shared housing promotes affordability, well-being in cities.”

Another upside of co-living is built-in community. It can offer some private space, but also opt-in opportunities for social interaction, knowledge-sharing and caregiving.

“People are looking for new forms of social units that provide for meaningful interactions in different stages of their lives,” said Bhatia.

In my anecdotal experience, mindfulness works really well even when separated... Inside Myanmar’s army: I’m reminded of Erving Goffman’s concept...
Scroll to top