Meer Katt, Minister in Charge of Shutdowns and Vaccine Appointments

The Government of Ontario is pleased to announce the appointment of Meer
Katt, Minister in Charge of Shutdowns and Vaccine Appointments. Katt brings his extensive experience in crisis management to the position and has released details on the government’s way forward in the pandemic for the coming months. 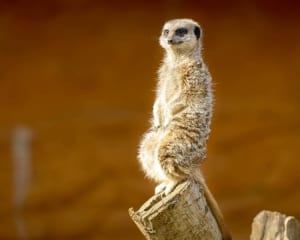 No stranger to life in sparse, desert-like conditions, Katt is a social animal and understands that the government’s emphasis will be on keeping the herd out and about at all costs. Katt feels it is well within his mandate to disregard the advice of public health officers as he is highly trained in standing on stumps to scout for approaching spikes in infection rates.

Typically a burrowing minister, Katt knows the importance of construction to the economy and will consistently resist shutting down job sites even where occurrences of transmission threaten to overwhelm hospitals.

The cabinet sees Katt’s genetic adaptation (he is capable of voluntarily sealing his ear openings) as an asset when taking questions from media or “taking a break from negativity.” And if the public gets upset about confusing, unfairly-defined and spottily-applied shutdowns or poorly-coordinated vaccine distribution, Katt will be the first minister (but not the last) to dive into the nearest hidey-hole until the criticisms (or the critics) die out. To learn more about Ontario’s shutdown minister, visit animalia.bio/meerkat

Analog to digital transfer of historic past recordings

A related topic of interest concerns how to transfer cassette tapes to WAV files.

A first-rate online resource (last updated July 1, 2020) by Andrew Heinzman regarding this topic is entitled:

Everything You Need to Convert Your Cassette Tapes to Digital

The post notes that if you want to get the best quality transfer, it’s worth getting a cassette tape deck instead of depending upon a less expensive USB cassette converter. I followed that advice.

I’ve recently purchased a Pyle PT-659DU cassette tape deck via Amazon. I’ve also purchased a U-Control 2 In/2 Out USB audio interface (adapter, that is) with digital output from Behringer via the Stratford Long & McQuade store.

This arrangement works particularly well, I’ve found, when I use a Windows laptop that I keep handy (my standard laptop is a MacBook Pro). It’s great to be able to adjust the recording level, when transferring from analog to digital, using Audacity software (which you can download for free) to get the signal just right. The U-Control stereo RCA cable to USB connection is ideal for such a transfer.

Volunteer work sometimes features large-scale community self-organizing ‘This is the most serious civil emergency in the history of Ontario’:...
Scroll to top