I’ve recently had the necessity to learn (once again) how to clear out the little chute or ‘hallway’ in a Baratza Virtuoso coffee grinder which I’ve been using regularly for some years. I use a Chemex coffee maker to brew coffee using coffee beans ground in a Virtuoso grinder, every morning. 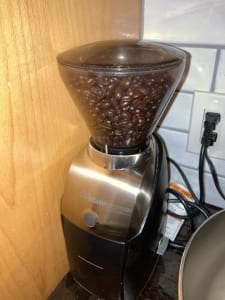 Without YouTube videos to refer to, I would have been up the creek for sure because the grinder had ceased to function until I used a paper clip, fashioned into a suitable configuration, to clear the chute.

A large paper clip, suitably bent into shape so that it could be used to unplug the passageway, which conveys ground-up coffee beans into a detachable receptacle at the front of the Virtuoso coffee grinder, did the job at once.

From a metaphorical perspective, the unclogging of anything – the removal of a stoppage – is either a welcome or unwelcome event. It depends on what’s clogged up and what the consequences of the unclogging happen to be.

That is to say the larger context, in which a flow of any kind establishes an overriding narrative arc, is a key variable when we refer to the unclogging of anything.

I use a small metal water container with a long spout to gradually add hot water to the coffee filter in a Chemex coffee maker when I brew coffee. 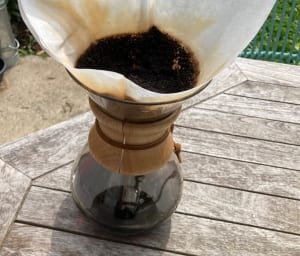 I often think about metaphors that come to mind as I pour the water each day.

If I stand with my face directly above the Chemex coffee filter, as I pour the water (the water is poured in a slow, circular path onto the ground coffee) then I can make sure the water from the container doesn’t overflow from the rim of the container, as I tilt the container to enable a thin stream of water to emerge from the narrow spout. 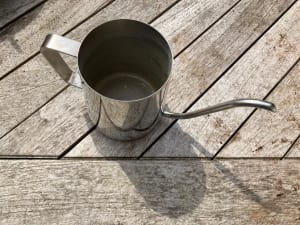 If I stand in such a way that the container is to the side (instead of me looking directly down at the container held right in front of me), then it’s easy for the water to ending up overflowing from the rim, as I’m tilting the container.

These practical matters give rise to musings in relation to metaphors that relate to observation and surveillance of ongoing events in life.

The practical details of everyday life call forth the application of creativity in response to the daily round of events and happenings.

Creativity involves the play of ideas

Creativity involves play; it concerns itself with the play of ideas, with the recombination of ideas and concepts in novel ways.

A great resource with regard to play is a book about play by Johan Huizinga which I learned about when reading an article by Dmitri Shalin published in Spring 2016 about Erving Goffman.

As soon as the effect of a metaphor consists in describing things or events in terms of life and movement, we are on the road to personification. To represent the incorporeal and the inanimate as a person is the soul of all myth-making and nearly all poetry. Strictly speaking, however, the process does not follow the course just indicated. There is no question of first conceiving something as lifeless and bodiless and then expressing it as something that has body, parts and passions. No; the thing perceived is conceived as having life and movement in the first place, and such is the primary expression of it, which is no afterthought. Personification in this sense arises as soon as the need is felt to communicate one’s perceptions to others. Conceptions are thus born as acts of the imagination.

Are we justified in calling this innate habit of mind, this tendency to create an imaginary world of living beings (or perhaps: a world of animate ideas), a playing of the mind, a mental game?

In the article referred to at a previous post, Dmitri Shalin remarks (pp. 16-17):

Goffman isn’t always explicit about the pedigree of his ideas, at least in his early works (Shalin 2014). Still, we can figure out the intellectual movements that stimulated his sociological imagination. Two works in particular should be singled out as early influences – Huizinga’s Homo Ludens (1944/1955) and Caillois’ Man, Play and Games (1958/1961). Historians studying the history of gaming recognize these pioneering efforts, although they pay little attention to their impact on Goffman (Reith 1999; Cosgrave 2006; McMillen 1996). One exception is Gerda Reith who points out Goffman’s “unacknowledged debt to writers like Huizinga and Caillois” (Reith 1999:4; cf. Scher 2009). This statement is only partially correct. Indeed, Goffman doesn’t systematically join issue with these precursors, but he credits their contributions and commends Caillois “for his very useful paper” (1961:17n; see also 70, 73; 1974:104n, 381). Goffman quotes from an article published a year before Caillois’ book appeared in English (1957:70n, 73); he also cites his French original but makes no reference to the 1958 English translation of the book.

Huizinga’s landmark study and Caillois’ extension of it accord games a special place in the history of humanity. To play a game is to lose oneself in a world governed by its own logic, marked by a sense of community, and generating a peculiar mood characteristic of ritual gatherings. Human culture emerged from the playgrounds of the bygone era where men and women engaged in playacting, staged theatrical performances, mounted sporting events, performed magic acts, and conducted religious ceremonies – the earliest forms of playful conduct. In the broadest terms, play is “an activity which proceeds within certain limits of time and space, in a visible order, according to rules freely accepted, and outside the sphere of necessity or material utility. The play-mood is one of rapture and enthusiasm, and is sacred or festive in accordance with the occasion. A feeling of exaltation and tension accompanies the action, mirth and relaxation follow” (Huizinga 1955:132).

These passage are among the most valuable passages that I have read in many years. I’m reminded of what Tyrone Guthrie has said about the essential characteristics of theatre. You can read about his comments elsewhere at this website.

SORE (Save Our Rand Estate) reports on July 14, 2021 public meeting in Niagara... Erving Goffman devoted his career to the structured, intensive study of ‘what’s...
Scroll to top