Tom Kuchlein contacted me recently after coming across a previous post about Cartierville School.

The previous post is entitled: Cartierville School in Montreal. 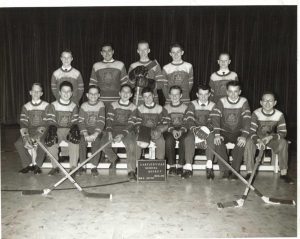 Cartierville School 1959-60 hockey team. In the front row, Tom Kuchlein is fourth from the right and Martin Kues is on the far right. Photo source: Tom Kuchlein

I’m pleased to say that I now have the picture (sent to me by email).

For the caption for the photo, Tom has shared names of two players. He comments, “I hope others may recognize themselves or friends in the picture.”

If anyone can add additional names of students for the caption, please let me know (in the Comments section below or by email at jpill@preservedstories.com).

We now have quite a few posts about Cartierville School.

Unfortunately I only remember two names associated with all the faces in the picture. Obviously my own, fourth from the right, and Martin Kues far right. He was one of my friends from Cloverdale in Pierrefonds. Sadly he was killed in a car accident shortly after his 21st birthday. I don’t know who took the picture but do remember that the team was made up of kids from grades 5, 6 and 7. I’m not sure who the coach was although the gym teacher of the time was a Mr. Bethel.

I remember Martin Kues. I was saddened when I heard he had died in a car accident. It’s great that you have two names.

I remember a Mr. Bethel who was a gym teacher at Morison School. He had a British accent as I recall. I remember one baseball game when students on opposing teams began to argue with each other, I think about a disagreement about a particular play during the game. Mr. Bethel put up with it for a while, then said, “Game’s over.” That was the end of the baseball game.

Martin was my best friend from around 1959, we were only 7 days apart in age. We grew apart somewhat after high school as our directions and interests changed. He went to University and I went to Montreal tech. . We were scouts at the Good Shepherd together and did a lot of camping and canoeing. My family was hit rather hard by his death as we were all close to him and his parents. Sadly his father passed away a year later from cancer. After that we lost touch with his mother.

Yah, Mr. Bethel was quite a character. I remember he organized a soccer game between Morison and Cartierville and coached both teams for the game. Worse than that though was that after the game he loaded the entire Cartierville team into his VW beetle and drove us home to Cloverdale. He was still teaching when my nephew was a student at Herbert Purcell in Pierrefonds in the late 70s.

I have been reading many of the posts with great interest. I noticed that quite a number of them are from people who immigrated to Canada as my family did or followed a similar path to Cartierville School and beyond as I did.

We came to Canada from the Netherlands in May of 1955. Our first home was a basement apartment on Linton Street in the Snowdon area. My first school was Van Horne School. I did 1 month of grade 1 there and failed miserably. I did pass math and art but failed English of course and penmanship as I had learned cursive and did not do block letters well. I did grade 1 again in 1955-56 at Van Horne with better results.

In 1956 we moved to Cartierville on Michel Sarrazin St. I did grades 2, 3 and part of 4 at Morrison school. In late 1959 we moved to a house on the corner of Gouin and Lalande Boulevards. I was transferred to Roxboro School for the rest of grade 4. Because the City of Pierrefonds could not make up its mind as to which street our house was on and the school districts could not get the boundaries figured out I spent the next 2 years riding the provincial bus to Cartierville School.

My teachers were Miss McDonald grade 5 and Mr. Hart grade 6. They were 2 teachers who had great influence on me and my class mates and we excelled under their care. It was also interesting to note that they married each other the following year. In 1961-62 I completed grade 7 along with many former Cartierville school classmates. After that I did grades 8 and 9 in Sir Winston Churchill High and 10 and 11 at Riverdale and the rest is history.

In a number of posts I noticed mention of The Church of the Good Shepherd that was across the Somerset Street from the school. I don’t know if anyone remembers that that church hosted a Cub Scout Pack, Boy Scout troop and Rover Crew during the 50s and early 60s. In early 60s I was a scout there and later the Scout troop became a Sea Scout Ship with 2 sail boats at the Venture in Point-Claire. Frank Budden was the leader during that time. I’m wondering if any of your followers might remember.

Well that’s about all I can remember.

My first experience of school was Van Horne School. That’s where I started my formal schooling. I don’t know how many years I was at the school before we moved to Cartierville. I remember that I really enjoyed playing games with classmates at recess. It’s interesting to look back, to summon up memories from those years.

I remember Snowdon quite well. I’ve been reading about the history of the neighbourhood recently.

Owner launches appeal against Town of Niagara on the Lake order to look after... Draft 3 of panel presentation: 30th anniversary of first national stuttering...
Scroll to top