There are a lot of things in Stratford that have changed and a lot of them probably needed to be changed, but the 380-396 Ontario Street proposal is not one of them

I have known Joyce, a long-time resident of Stratford, since September 2018; she was among the first people that we met when we moved to Stratford from Toronto.

A previous post is entitled: A proposal for development project in Stratford, between Queen Street and Trow Avenue on the north side of Ontario Street, has turned out to be contentious

Joyce has shared with me some comments she has prepared for submission to the Stratford Council:

I have been thinking, as a long-time resident of Stratford, of the buildings I’ve worked or lived in, or have otherwise been connected with, over the years.

My first job was at Silverwood Dairies in the mid-1950s, in the days when the horse-drawn wagons delivered the milk. That was about where the Shoppers Drug Mart parking lot on Ontario Street is now. And, then I went over to 91 to 99 Erie Street, where I worked at Jack Hood School Supplies, which in turn was torn down for a parking lot. 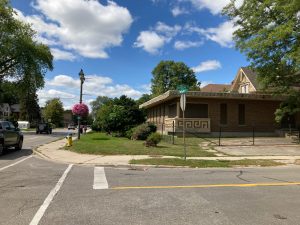 View looking west from the corner of Queen Street (in foreground) and Ontario Street (on left) in Stratford. Jaan Pill photo

From there I went to the former R.M. Ballantyne textile plant on Ballantyne Avenue, where I worked for Scholars Choice. That building was eventually demolished, too. The condominiums that were subsequently built at the site are easy to look at. They fit in well with the local streetscape, with the local neighbourhood. For all of my elementary school years, I went to Juliet Public School, which was eventually torn down for more housing. 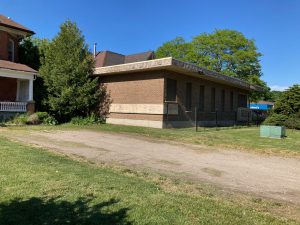 For thirty-eight years, I lived at 405 Ontario Street, and I remember when the houses at 406 and 414 Ontario Street were torn down for a gas station. These were lovely old homes, and there was a beautiful old home where the former Golden Bamboo restaurant building stands now, clearly an eyesore. We’re used to seeing the Domino’s Pizza on the corner opposite the Golden Bamboo, and that’s okay.

A lot of the changes are progress, but a lot of it isn’t. I remember walking home from my work downtown sometime in the 1960s, and you’d see all
the beautiful old trees being cut down to widen the roadway. That, again, is progress, but some of those things are heartbreaking. 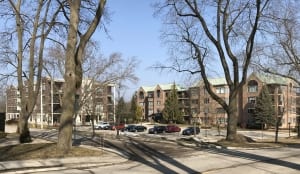 Years later, when I came over to live on Front Street, I was amongst the neighbourhood that fought against having a hotel built at the former R.M. Ballantyne site between Front and North Streets. There would have been a hotel built down by the Avon River, which would have been terrible. There was a plan, next, to build a seven storey condo, which was reduced to four storeys when the residents objected. It’s now a beautiful part of the neighbourhood, with two mid-rise condos by the river. At 210 Water Street, near where I now live, there was a proposal to put in a big school, which fortunately didn’t happen. 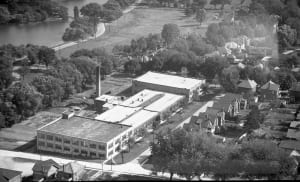 On Ontario Street, where the Golden Bamboo is an eyesore, now, after years of being vacant, what’s being proposed does not look right. Just the huge building itself doesn’t look right. Building it amongst all those older homes, where I grew up, just doesn’t fit in. It’s not the right place for such a building.

When I think about this, some other things about Stratford come to mind. I remember the old post office in the city. I remember being there as a youngster. It was a beautiful building. It would be really something for tourists to look at, but it’s gone. Years ago, the City Hall would have been gone, as well. I still see people on the street looking over at that building and taking pictures to take home. It’s a beautiful building, but that would have been gone, too.

Much of the economic vitality of Stratford, we can add, is closely connected to the success of the Stratford Festival since 1953. Stratford is seen by many Canadians, and tourists from elsewhere, as Canada’s cultural tourism destination. The beautiful old houses, along Ontario Street and nearby streets where the Festival Theatre and Tom Patterson Theatre are located, are key features of Stratford as a tourist destination. 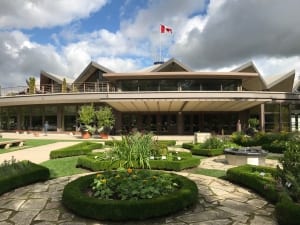 In the early 1900s, R. Thomas Orr led a successful effort to arrange for existing parks along the Avon River to be joined together and cleaned up. Then, along came a proposal to build a railway along the river. Many residents supported the proposed railway line because it would bring prosperity, but R. Thomas Orr argued, on the contrary, that keeping the parkland intact made better economic sense. A referendum in 1913 saved the parkland by a margin of 127 votes. Tom Patterson, among other people, has argued that, had the park system been destroyed, the Festival would not have happened.

The historic corridor along Ontario Street is an economic asset of tremendous value to the city. Destruction of the historic character of the street will not serve the city’s long-term economic needs, any more than destruction of the city’s parkland in the early 1900s would have served Stratford’s future needs. There are a lot of things in Stratford that have changed and a lot of them probably needed to be changed, but the 380-396 Ontario Street proposal is not one of them.

How we frame things determines what we see and (sometimes) what occurs next.... Update from SORE (Save Our Rand Estate) regarding appeals related to Ontario...
Scroll to top