We much enjoyed our Malcolm Campbell High School luncheon in Toronto on Oct. 21, 2022

Our MCHS luncheon on Oct. 21, 2022 in Toronto featured wide-ranging conversation about many topics of interest. Bob Carswell has a new place to live which works out really well for him. The weather was sunny and warm. 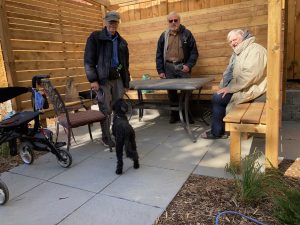 On this occasion I took along our family dog named Teddy. She thought the trip to Toronto was a great adventure. I took her on several walks in the neighbourhood. She was fascinated with everything she saw and sniffed. Travel and adventure suits dogs as well as humans!

Bob Carswell now lives in Mimico in Etobicoke; previously he lived in New Toronto which is adjacent to Mimico. Also at our meeting was Scott Munro of Dundas, Ontario.

On walks with my dog during and after our MCHS luncheon, I walked by John English Community School and many other locations in Mimico that I know well from years past. I thought of all the things I have learned in previous years about land use decision making and many other topics in person-to-person and email communications. I’m pleased that a network of connections is in place in Mimico and elsewhere (whether inside or outside of neighbourhood associations) to enable the interests of residents to be taken into account on occasion. 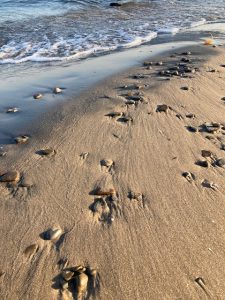 On Sept. 2, 2021, we met for a high school picnic at an apartment parking lot with a great view of Lake Ontario. We learned how Bois-de-Saraguay in Montreal was saved from destruction.

Years ago the British navy was everywhere

At the latter post I cite a newsletter article:

Ken Purvis refers in the article to heavy guns, such as the long gun located at Marie Curtis Park, as “a quintessential symbol of Canada’s colonial past.”

He also refers to the Motto of Britain’s Royal Artillery. The motto is “Ubique”, the Latin term for “Everywhere.”

I’ve written about the history of the British empire at a recent post:

I think of this fact: I learned English starting at the age of five when I came to Canada as an immigrant. As a student in elementary school and high school in Montreal I learned many things about English literature. In the years that followed I have learned a few additional things about British history, which I had not learned when I was a student in the English language school board that was in place in those years in Montreal.