Eighty people turned up, and the feedback has been positive.

In 1995, I was involved in planning a three-day national conference in Toronto. In those years, my volunteer work that did not involve heritage preservation or related topics.

The 1995 conference, for a national non-profit organization of which I was a co-founder in 1991, had over 200 attendees. The high attendance figure was the result of extensive publicity  — which in those days included mailouts of information using Canada Post.

I’d been involved in planning of smaller events in Toronto and elsewhere for several years before that.

On the opening day of the 1995 conference, I remarked to fellow organizers that, “We’ve done a great job of organizing this event. Now that we’ve done our work, we can relax and have a good time.”

Things turned out as predicted. Everyone enjoyed a great conference.

That’s how we’ve learned to approach all of the events we’ve been involved in planning, since the late 1980s.

The planning is the foundation. It’s the structure that you build before the event takes place. The thought that goes into the planning is manifested in the final product.

If the planning has been done well, there will be room for spontaneity and serendipity during the event. The latter ingredients are also essential. As Mike James likes to say, it’s not a good idea to ‘overplan’ an event. 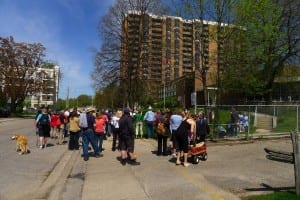 The archaeological remains of the Colonel Samuel Smith homestead are located on the school grounds of Parkview School at 85 Forty First Street. The Ontario government announced on August 25, 2011 that it would provide $5.2 million in funding to enable the school to stay in public hands. A new French elementary school is slated to open on the site in 2013. The sale of the school has turned out to be a ‘good news’ story thanks to the efforts of Etobicoke-Lakeshore MPP Laurel Broten (now Minister of Education); Ward 3, Etobicoke-Lakeshore TDSB Trustee Pamela Gough; Toronto Lands Corporation officials; large numbers of people who wrote letters in support of keeping the school in public hands; and several key individuals who shared strategic advice. Photo credit: Peter Foley

The planning begins months before the event

For the South Long Branch Jane’s Walk, the planning began several months before the event.

That gave us plenty of time to publicize the walk and develop a clear picture of what we’d be talking about.

It also gave us time to visit the site several times, to help us in picturing how best to organize each stage of the walk.

This was the second Jane’s Walk that Mike James and I have been involved with.

We also had brief speaking roles at a Jane’s Walk in Mimico the day before, on May 5, 2012.

I’ve also attended a Heritage Walk and a Tree Walk. As a result, we had a good idea of how such events are structured, and how a person attending such an event will experience it.

In the next few blogs we’ll discuss aspects of the planning process, based on our experience with the May 6, 2012 South Long Branch Jane’s Walk.

Do you have a success tip as a Walk Leader that you’d like to share with... Publicity for the South Long Branch Jane’s Walk took many forms —...
Scroll to top