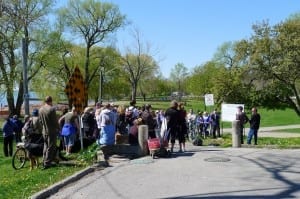 The large turnout for the May 6, 2012 South Long Branch Jane's Walk can be credited to word-of-mouth advertising; a well-designed poster featuring a 1920s photograph of children in a boat; detailed information on the Jane's Walk website; notices in Ward 6, Etobicoke-Lakeshore Councillor Mark Grimes' newsletter; articles in The Lakeshore Villages, The Etobicoke Guardian, and The Toronto Star; and other forms of publicity. Photo credit: Peter Foley

Publicity for the May 6, 2012 South Long Branch Jane’s Walk took many forms, was prepared with close attention to detail, and began months before the event.

The office of Etobicoke-Lakeshore, Ward 6 Councillor, Mark Grimes suggested that we organize this walk in the first place, and provided extensive publicity for it through the Councillor’s newsletter.

An early source of additional publicity involved an article that appeared in The Lakeshore Villages newspaper, distributed widely in the Lakeshore communities.

For the latter article, we provided extensive information to Lindsay Howe, a writer for the newspaper, about the walk.

We also provided photos from the 1920s and later decades that we’d come across over the past year in the course of oral history interviews that we’ve been recording for several years with long-time Long Branch residents.

Some days before the Jane’s Walk on May 6, 2012, we received further publicity in The Etobicoke Guardian, in an editorial which highlighted all of the Jane’s walks in South Etobicoke.

As well, around that time The Toronto Star, in an article about the Jane’s Walks in the Toronto Area, selected the South Long Branch Jane’s Walk as one of the walks that warranted particular attention.

Part of the material for Lakeshore Villages included a Question and Answer interview that Jaan Pill conducted with Daryl Pantel, a local accountant who is Treasurer of the Long Branch Historical Society.

An early version of the interview is posted below.

The following is an excerpt from an interview conducted by the May 6, 2012 South Long Branch Jane’s Walk co-leader Jaan Pill, in conversation with Daryl Pantel, CMA, treasurer of the Long Branch Historical Society.

Jaan: Tell me, are you looking forward to the Jane’s Walk?

Daryl: Yes, actually I am looking forward to it — and I was wondering if I could invite some friends on the walk from other neighbourhoods that are hoping to come explore Long Branch, and see how the Jane’s Walk works.

Jaan: What are some of the features of Long Branch, if we start at Marie Curtis Park, and walk all the way to New Toronto, where the Lakeshore Hospital Grounds are located, that would appeal to you, in a walk?

Daryl: Well, some of the history of some of the older houses, what happened in these areas, and how the cannon landed up on the beach at Marie Curtis Park. From the park all the way along Lake Promenade to Twenty Third Street, there is a lot of older, refurbished houses along there. I’d like to know: Which ones are historical? Why are they historical? What happened in what’s left of Long Branch Park?

Additionally, what happened down along Dominion Road, and why everyone wants to ‘rejuvenate’ it, by reconstructing it instead of maintaining what we have?

We need to recognize the tradeoffs that people are facing, and the governments are facing, to keep and maintain a heritage culture. By the same token you have to have progress, in order to survive, and our neighbourhood, I think it’s becoming very ‘up and coming’ right now.

It’s been quite quiet and stagnant — which has been lovely for us that live here. However we do need to have an economy to sustain our neighbourhood. I think we have to learn how to do that and still maintain our integrity. 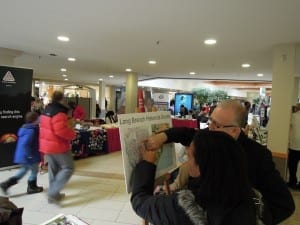 Poster for May 6, 2012 Janes Walk, featuring mid-1920s photo of children in boat near mouth of Etobicoke Creek

The Long Branch Historical Society had a display table at the 7th Annual Government and Community Services Fair held at Cloverdale Mall on Saturday February 25, 2012.

The Cloverdale event was a wonderful occasion for networking and publicity. We distributed large numbers of May 6, 2012 Jane’s Walk posters, and met the father (Bob Lansdale) of the computer specialist (Robert Lansdale) who’d used PhotoShop to enhance the photo, from the mid-1920s, that we used on our poster.

Robert Lansdale subsequently provided us with tremendously valuable information that played a key role in the research that we did about changes at the mouth of Etobicoke Creek between the 1920s and 1950s.

The profile included the mid-1950s photo that we used in our poster, as well as a brief but detailed overview of highlights of the walk.

The description of the walk, at the Jane’s Walk website, was based on extensive consultation with Fanny Martin, Jane’s Walk Event Manager, who provided advice on how best to go about creating a description for the South Long Branch Jane’s Walk.

May 6, 2012 South Long Branch Jane’s Walk began with extensive planni... How do you make a Jane’s Walk into a conversation?
Scroll to top