You can access the MCHS 2015 Stories Category of posts here.

Stories are at the heart of the experience of a 50-year (give or take a few years, depending on the year you graduated) high school reunion.

We’ve set up the MCHS 2015 reunion in such a way that the format enables people to freely mix and mingle – during the buffet dinner portion of the evening, for example – and share lots of stories.

We’re also having discussions, including online discussions, on way to share stories with the entire group of graduates at the reunion, in a way that has a strong focus on “interestability.”

Bois Franc today. We owe thanks to Tim Hewlings (MCHS '63) for sending along this map. The source is Google Earth.

We have set up several categories at this website related to stories that involve Malcolm Campbell High School. The stories that we’ve posted to date have led to many comments from many MCHS grads, and we’re very pleased about that. I for one know more about the early history of Bois Franc Boulevard than I would ever have imagined I would learn.

For a start, we have MCHS 60s Biographies.

We’re keen to have people – anyone attending MCHS at any point in the 60s, even if they graduated in the 70s – write their biographies, and we’re pleased some of us have done so.

In some cases, I’ve taken something that someone has written and classified it as a biography.

However, so far we haven’t received that many bios. Many people have said they will write but maybe they experience whatever happens to writers when they have a major project. Oh, yeah, now I recall. It’s called Writer’s Block.

One way to overcome it is to just narrate your life story, very briefly, to a friend, and record the process on your iPhone or whatever you use to record your voice. Then use the transcript as the basis for your text.

Or you could interview a classmate, and write their bio, and your classmate can do the same for you. That’s still another way to address Writer’s Block.

Stories related to the history of Cartierville, Saraguay, and surrounding areas

We have an incredible number of stories dealing with Cartierville School and other elementary schools attended by people who went on to Malcolm Campbell High School for their secondary education.

These items you can find under the Stories Category. A typical recent story is about the time that Ruth McLeod and classmates looked out an upper-storey window at MCHS and saw a favourite gym teacher arriving at the staff parking lot in a dark blue Type-E Jaguar, which she had received as an engagement present.

We’ve also had endless discussions about the Polo Fields that used to exist in Saraguay, and the early history of Saint-Laurent, Cartierville, Saraguay, Ahuntsic, and other neighbourhoods.

Scott Munro, a member of the organizing committee, is keen to gather stories together that specifically focus on things that happened on a particular occasion in a particular class. 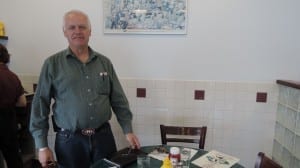 Peter Mearns. Note the 'Canadiens' belt buckle. Click to enlarge the image. Click again to enlarge it further. Use the "back" button on your browser to return to the page you are now reading.

One of the stories is a Mr. Lafon story, shared by Peter Mearns at a meeting on April 25, 2014 of the MCHS 2015 organizing committee meetings:

“We shared our usual round of war stories – including an anecdote from Peter Mearns about the time that a husky and very tall student got mad at the French teacher, who taught the class that Peter Mearns was in. The student walked up to the teacher with the intention of having a fight with him. The teacher, experienced in such matters, hit the student first, spending him tumbling to the floor. When the student got home, if I recall the story correctly, the father staunchly sided with the teacher as was the standard practice, way back then, regarding such matters.”

That story reminds me that some things haven’t changed. Teachers remain subject to assault by students. A Jan. 16, 2015 CBC The Current podcast comes to mind in this regard, entitled: “Students assaulting teachers in class, a common occurrence in Canada.”

A next step, with regard to Class Stories, is to set up a separate Category for them. That is a project that we are currently working on.